President Donald Trump’s decision to authorize a missile strike against a Syrian air base Thursday night signals a major break not only with the Obama administration but also with past statements made by the President himself.

Fifty Tomahawk missiles were fired at the air base from which the chemical attacks against Syrian civilians were launched earlier this week and left more than 70 people dead.

“It is in the vital national security interests of America to prevent and deter the the spread and use of deadly chemical weapons,” Trump said in a statement from his Mar-a-Lago estate.

The decision to use military force against Syria marks a remarkable reversal for Trump. In 2013, he was a vocal critic of President Barack Obama’s contemplation of strikes in Syria following President Bashar al-Assad’s initial use of chemical weapons against his own people. (Obama had previously said that the use of chemical weapons against the Syrian citizenry would be crossing a “red line” for him).

“What will we get for bombing Syria besides more debt and a possible long term conflict?” Trump asked in one tweet. “Obama needs Congressional approval.” 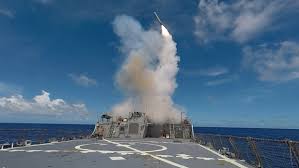 During the course of his 2016 presidential campaign, Trump insisted that the Obama administration was letting its commitment to political correctness outweigh the fight against terrorism. He specifically targeted Obama’s willingness to accept Syrian refugees as a prime example of misguided policies that he would change. He signed an executive order — blocked by a federal court — that sought to ban all refugees from Syria.

What changed for Trump? Judging from his public comments, the images he saw coming out of northwest Syria earlier this week.

At a joint news conference with Jordan’s King Abdullah on Wednesday, Trump explained his change of heart this way:

“Yesterday’s chemical attack, a chemical attack so horrific in Syria against innocent people including women, small children, and even beautiful little babies, their deaths was an affront to humanity. These heinous actions by the Assad regime cannot be tolerated. My attitude toward Syria and Assad has changed very much.”

There’s no question that some of Trump’s shift is also explained by the massive difference between being a private citizen offering a critique via Twitter and being the president of the United States. The weight of the office changes people.

It’s also important to remember how much the shadow of Obama hangs over Trump’s actions. Obama was regarded by most establishment Republicans as feckless after failing to act once his self-described “red line” of chemical attacks had been crossed.

It became, in the minds of many, a symbol of everything they disliked about Obama’s foreign policy: He was too timid to act when action was necessary.

Trump is ever aware of showing people that he is both a) the anti-Obama and b) a man of action. Whereas Obama let al-Assad cross a red line with no penalty, Trump made clear on Wednesday that the chemical attack “crosses many, many lines — beyond a red line, many, many lines.” And on Thursday night, he turned that rhetoric into action.

Trump has often touted his willingness to be flexible in his policy debates. The decision to strike Syria seems to be Exhibit A of that trait.