Iran and Syria on Saturday denied that an unmanned drone Israel said it shot down violated the Jewish state’s airspace, calling Israeli allegations “lies” and saying the drone was on a regular mission gathering intelligence on Islamic State.

Iranian foreign ministry spokesman Bahram Ghasemi said Syria “has the right to legitimate self-defense. To cover their crimes in the region, Israeli officials are resorting to lies against other countries.”

The deputy chief of Iran’s Revolutionary Guards warned, meanwhile, that his country could “bring hell upon the Zionist regime.”

Brigadier General Hossein Salami refused to confirm to the Tasnim news agency that an Iranian drone had been shot down. “We cannot confirm this report on the drone because Israelis are liars … if Syrians confirm it, Iran will confirm it as well,” said Salami, according to a Reuters translation.

But he warned that Tehran had the capability to destroy all US army bases in the region and to “bring hell upon the Zionist regime.”

He added that the damage sustained from the Israeli aircraft fire was limited to property, but acknowledged that a number of soldiers had been injured as well.

The Hezbollah-affiliated Al Mayadeen TV station claimed that the Syrian military had managed to intercept 70 percent of the dozens of missiles fired by Israel’s warplanes.

The Israeli army responded to the drone infiltration with strikes on Iranian targets, including the drone’s launch site — the Tiyas Military Airbase near Palmyra — which the army said it hit in “a complicated surgical strike.” The strike reportedly targeted a facility housing the unmanned aircraft’s Iranian operators.

Israeli warplanes flying over Syria met heavy anti-aircraft fire. The military said one of its pilots was seriously wounded as a result of an emergency evacuation from his F-16 jet targeted by missiles. The F-16 crashed in northern Israel. One pilot was evacuated to a hospital in serious condition. A second pilot was lightly wounded. 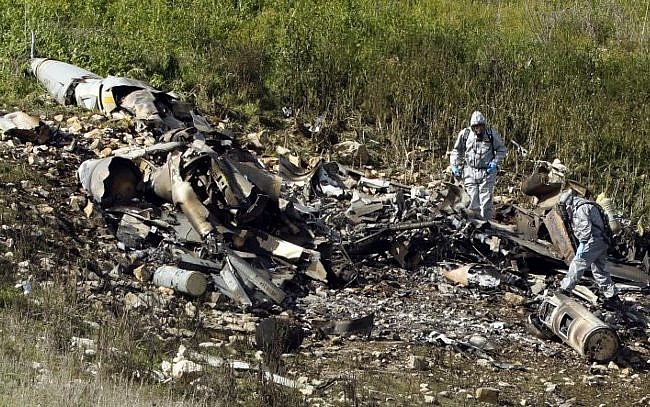 A picture taken in the northern Israeli Kibbutz of Harduf on February 10, 2018, shows the remains of Israeli F-16 that crashed after coming under fire by Syrian air defenses (AFP PHOTO / Jack GUEZ)

If the plane was in fact shot down by enemy fire, it could mark the first such instance for Israel since 1982 during the first Lebanon war.

Wassim Elias, 39, a government employee, called it retribution for the many Israeli raids on Syrian soil before. “This earned the Syrian army and every Syrian citizen prestige. This is what we have always demanded,” he said.

Firas Hamdan, 42, a public servant, said such Syrian responses will ensure no more Israeli attacks in Syria. “Such attacks should be confronted and the response should be tougher to give the Israelis a lesson.”

A Syrian lawmaker, Feras Shehabi, said the response marked a “major shift in the balance of power in favor of Syria and the axis of resistance.” He said “Israelis must realize they have no longer superiority in the skies or on the ground.”

Military spokesman Jonathan Conricus said the army had information on the drone’s mission, but would not go into details, saying only that it was “on a military mission sent and operated by Iranian military forces.”

He warned that Syria and Iran were “playing with fire,” but stressed that his country was not seeking an escalation.

“This is the most blatant and severe Iranian violation of Israeli sovereignty in the last years,” Conricus told journalists in a phone conference. “That’s why our response is as severe as it is.”

The confrontation was the most serious between Israel and Iran since the start of the civil war in Syria in 2011.

Diplomatic sources said Israel has appealed to Russia to intervene and prevent further escalation. Similar calming messages were reportedly passed on to Washington. 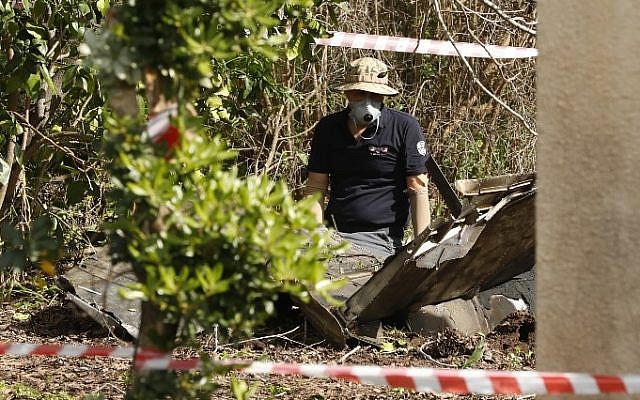 In Lebanon, too, missile parts rained down from the sky. 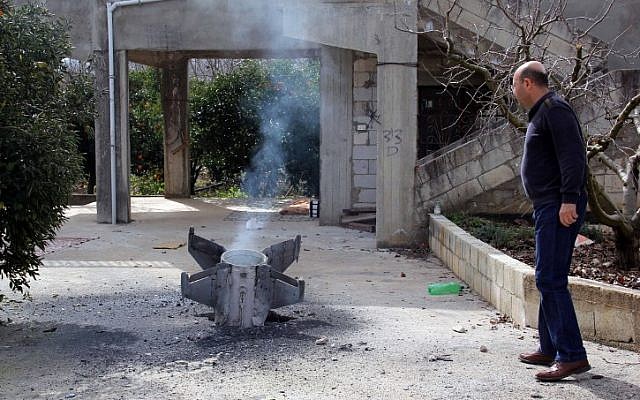 A picture taken on February 10, 2018, shows the remains of a missile that landed in the southern Lebanese village of Kaoukaba, near the border with Syria, after Israel’s military attacked 12 Syrian and Iranian targets inside Syria (AFP PHOTO / Ali DIA)

“This is a serious Iranian attack on Israeli territory. Iran is dragging the region into an adventure in which it doesn’t know how it will end,” he said in a special statement. “Whoever is responsible for this incident is the one who will pay the price.”

By noon Defense Minister Avigdor Lieberman was convening the top brass at military headquarters in Tel Aviv to discuss a further response.

“The IDF is following events and is fully prepared for further action according to decisions and need,” the military said.

Retired Lt. Col. Reuven Ben-Shalom, a former Air Force pilot, said the fierce Israeli response was meant not only to counter the immediate threat but also to send “very clear messages” to show Iran how deep Israel’s knowledge was of its activity in Syria.

“The fact that a drone like this is identified, tracked and intercepted so smoothly by the Israeli air force demonstrates our capabilities, demonstrates our resolve not to allow the breach of Israeli sovereignty,” he said. “I think it’s good that our enemies learn and understand these capabilities.” 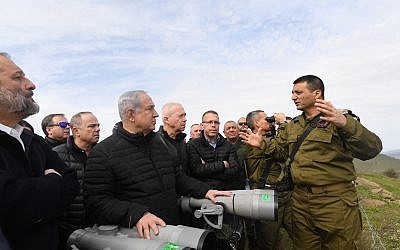 Israel has been warning of late of the increased Iranian involvement along its border in Syria and Lebanon. It fears Iran could use Syrian territory to stage attacks or create a land corridor from Iran to Lebanon that could allow it to transfer weapons more easily to Hezbollah.

The Israeli Cabinet recently held a meeting on the Golan Heights near the border with Syria to highlight new threats, which are attributed to Iran’s growing confidence given Assad’s apparent victory in Syria thanks to their help.