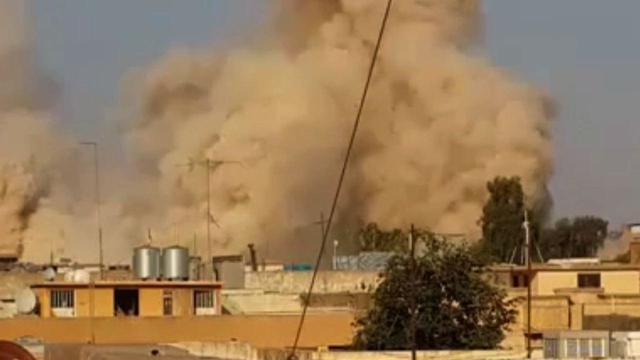 The holy site, located inside a Sunni mosque, is supposed to be the burial place of the prophet, a key figure in Islamic and Judeo-Christian traditions. ISIS, which has been claiming cities across Iraq and Syria, has threatened to destroy any shrine it deems un-Islamic.

This  amateur video of the explosion below has appeared on YouTube:

According to a report from the Agence France Press, ISIS detonated the explosion remotely, taking an hour to to rig the shrine with explosives after ushering locals away and closing the roads leading to the site. “They first stopped people from praying in it, they fixed explosive charges around and inside it and then blew it up in front of a large gathering of people,” an anonymous witness told the AFP.

ISIS has been tearing down holy sites throughout the past month, including several other Sunni holy sites in Mosul and seven Shiite ones in the city of Tal Afar, reported Human Rights Watch.

The same day the tomb of Jonah fell, meanwhile, Iraqi lawmakers elected Fuad Masum to be the country’s new president, a selection the U.S. praised and said would move the country in the right direction amid the conflict.

“They agreed on the importance of forming a new Iraqi government as quickly as possible and working to arrive at an agreed-upon road map for governance,” the White House said in a statement on Vice President Joe Biden’s congratulatory call to Masum. “President Masum expressed the importance of restoring trust and confidence among all of Iraq’s communities and continuing to rebuild Iraq’s relations in the region.”

This article was originally published at http://www.thewire.com/global/2014/07/video-shows-isis-blowing-up-iraqs-tomb-of-jonah/375044/

One thought on “ISIS Swallowing Up Mosul”