Skip to content
Date: October 6, 2014Author: lance goodall 0 Comments
He’s getting sicker.Dallas Ebola patient Thomas Duncan is now in critical condition, Texas Health Presbyterian Hospital said Saturday. He was previously listed in serious but stable condition.His worsened condition comes after his family said he had become “too sick to speak,” Friday. They no longer have any communication with the 42-year-old, who has been in isolation since Sunday.
Earlier this week, Duncan became the first — and so far only — person to test positive for Ebola on U.S. soil. He contracted the virus during a trip to Liberia, but traveled to Texas before he was diagnosed.

Duncan originally went to the hospital on Sept. 25, but was sent home with antibiotics and pain pills.

Three days later, he went back to the Dallas hospital in an ambulance. Doctors finally isolated him and began investigating anyone who was in contact with Duncan.

The Centers for Disease Control and Prevention is monitoring 50 people close to the Liberia native. While not in hospital isolation, their temperatures’ are being taken daily, officials said

The people who live with Duncan — his partner, Louise Troh, her 13-year-old son and her two nephews — were moved to quarantine in a private home Friday so crews could disinfect Duncan’s apartment.

Of the 50 possibly exposed to Ebola, 10 are at “high risk” for developing the disease, health officials announced Friday.

The 2014 Ebola outbreak is centered in three West African countries: Guinea, Liberia and Sierra Leone. More than 7,100 cases have been reported in those countries and 3,330 of those were deadly.

After the first Ebola patient was diagnosed in the U.S., an infectious disease specialist talks with the Daily News about prevention – and why you shouldn’t panic.

The number of people reporting Ebola-like symptoms has ballooned since Duncan’s diagnosis. Possible patients in Hawaii, Georgia and Washington, D.C., all tested negative for the virus this week.

While at the same time reuters reported that the patient was having a difficult time, and was in a critical condition> 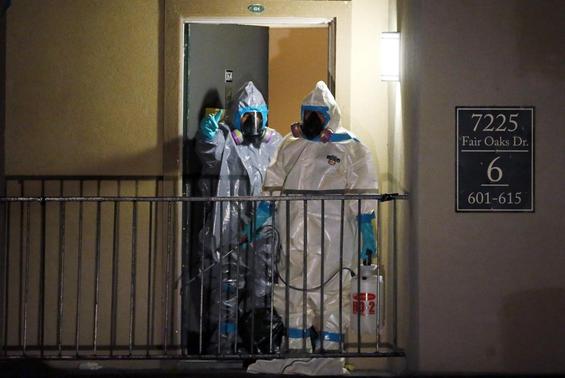 Workers in hazardous material suits step out of an apartment unit where a man diagnosed with the Ebola virus was staying in Dallas, Texas, October 5, 2014.

(Reuters) – The first person diagnosed with Ebola in the United States was fighting for his life at a Dallas hospital on Sunday and appeared to be receiving none of the experimental medicines for the virus, a top U.S. health official said.

Thomas Eric Duncan became ill after arriving in the Texas city from Liberia two weeks ago, heightening concerns that the worst Ebola epidemic on record could spread from West Africa, where it began in March. The hemorrhagic fever has killed at least 3,400 people out of the nearly 7,500 probable, suspected and confirmed cases.

“The man in Dallas, who is fighting for his life, is the only patient to develop Ebola in the United States,” Dr. Thomas Frieden, director of the U.S. Centers for Disease Control and Prevention (CDC), said on CNN’s “State of the Union.”

In a media briefing with reporters on Sunday, Frieden said he was scheduled to brief President Barack Obama on Monday.

Frieden said doses of the experimental medicine ZMapp were “all gone” and that the drug, produced by San Diego-based Mapp Biopharmaceutical, is “not going to be available anytime soon.”

Asked about a second experimental drug, made by Canada’s Tekmira Pharmaceuticals Corp, he said it “can be quite difficult for patients to take.”

Frieden said the doctor and the patient’s family would decide whether to use the drug, but if “they wanted to, they would have access to it.”

“As far as we understand, experimental medicine is not being used,” Frieden said. “It’s really up to his treating physicians, himself, his family what treatment to take.”

Earlier on Sunday, health officials said they were also seeking a “low-risk” homeless man who was one of 38 people who had potentially had contact with Duncan. Later on Sunday, a spokeswoman for Dallas County’s top political official, Judge Clay Jenkins, said the man had been found and was being monitored.

At Wilshire Baptist Church in Dallas, parishioners prayed for Duncan, congregation member Louise Troh – who is quarantined because of her close contact with Duncan – and both of their families.

“Although this disease has become personal to us, we realize we’re not the first to know its devastation, and we are not the ones most desperately affected,” Associate Pastor Mark Wingfeld told the church audience.

He encouraged parishioners to focus not only on the Dallas family but also on those in West Africa stricken with Ebola.

In Nebraska, another hospital was preparing for the arrival of an Ebola patient who contracted the virus in Liberia, a spokesman said on Sunday.

Nebraska Medical Center spokesman Taylor Wilson would only identify the patient as a male U.S. citizen expected to arrive on Monday. But the father of Ashoka Mukpo, a freelance cameraman working for NBC News who contracted Ebola in Liberia, told Reuters on Friday that his son was going to Nebraska for treatment.

Sacra was admitted to UMass Memorial Medical Center in Worcester, Massachusetts on Saturday for a likely respiratory infection that is not believed to be a recurrence of the disease, hospital officials said.

Duncan’s case has highlighted problems that American public health officials are trying furiously to address: The Dallas hospital that admitted him initially did not recognize the deadly disease and sent him home with antibiotics, only for him to return two days later in an ambulance.

“The issue of the missed diagnosis initially is concerning,” Frieden said, adding that public health officials had redoubled their efforts to raise awareness of the disease.

“We’re seeing more people calling us, considering the possibility of Ebola – that’s what we want to see,” he said on CNN. “We don’t want people not to be diagnosed.”

Frieden said he was confident the disease would not spread widely within the United States. U.S. officials are also scaling up their response in West Africa, where Ebola presents an enormous challenge, he added.

“But it’s going to take time,” Frieden said. “The virus is spreading so fast that it’s hard to keep up.”

When asked on Sunday if the United States should suspend flights to and from affected countries or impose a visa ban on travelers from those countries, Anthony Fauci, director of the National Institute of Allergy and Infectious Diseases, said “absolutely not.”

“When you start closing off countries like that, there is a real danger of making things worse,” Fauci said on “Fox News Sunday.”

“You can cause unrest in the country,” he said. “It’s conceivable that governments could fall if you just isolate them completely.”

The CDC has identified 10 people who had direct contact with Duncan as being at greatest risk of infection. Another 38 were being monitored as potential contacts, out of 114 people initially evaluated for exposure risks. None from either group has shown symptoms, health officials said.

Ebola, which can cause fever, vomiting and diarrhea, spreads through contact with bodily fluids such as blood or saliva.

But according to the Israeli National News, Thomas Duncan, the 1st US ebola patient, has died.

Strangely enough, we have been unable to confirm his death ANYWHERE and people who are following these things want to know why America has not yet been told! While most Americans are seemingly too busy watching football, America has only been told by the MSM that Duncan is in critical condition.

Is THIS how America finds out we SHOULD trust the news from another country more than our own MSM?

DALLAS ” The first Ebola patient diagnosed in the United States told health … shared, a hospital official said Wednesday. Thomas Eric Duncan went to a Dallas emergency room Friday and explained that he was visiting the U.S. from Liberia.

We KNOW that the CDC attempted to hide this illness from America in the 1st place; are they now trying to pull another ‘fast’ one?

Don’t they realize that MANY Americans are AT LEAST as smart as OUR government? WHY would they try to HIDE THIS from us as well? As stated above, we have been unable to confirm this report which the Israeli National News says they got from Reuters; are THEY mistaken or is our own media just waiting for the ‘RIGHT’ time to tell us? Check out the AP video below, are they just ‘preparing’ us for the news? The 2nd video below from Mary Greeley shares that the CDC is now searching for a homeless man in Dallas who was exposed to Duncan prior to his hospitalization.

Thomas A. Duncan, who became ill with Ebola after arriving from West Africa in Dallas two weeks ago, succumbed to the virus today (Sunday), reports Reuters. Duncan was fighting for his life at a Dallas hospital on today after his condition worsened to critical, according to the director of the US Centers for Disease Control.

The Dallas hospital that admitted him did not recognize the deadly disease at first and sent him home, only for him to return two days later by ambulance.