Snow blanketed the grounds around the Capitol on Thursday in Frankfort. TOM LOFTUS — The Courier-Journal

BY LINDA B. BLACKFORD AND JACK BRAMMER

A record-breaking snowstorm slammed Kentucky on Wednesday night and Thursday morning, stranding thousands of motorists on interstates and prompting a statewide emergency declaration for the second time in 21/2 weeks.

That highway came to a standstill Wednesday night amid jackknifed trucks and snowbound cars. At one point, a 40-mile stretch from Munfordville in Hart County to Lebanon Junction in Bullitt County was impassable, littered with vehicles that prevented snowplows from clearing the road, state transportation officials said.

Some motorists said Thursday afternoon that they had been stuck in the same spot since 8 p.m. Wednesday.

“Cars and trucks are stuck in the roadways, and that prevents us from getting our road equipment in,” Beshear said in an early afternoon conference call with reporters from the state Emergency Operations Center. “It’s all slow but beginning to move at this time.

“The main issue is we don’t want people stranded in their cars for a long period of time,” Beshear said, expressing concern about subzero temperatures forecast for Thursday night and Friday morning.

Beshear said he directed state police and the National Guard to “do whatever is necessary to protect people.”

About 150 National Guard members had been activated as of 4 p.m. Thursday, said Guard spokesman David Altom.

Lt. Col. Kirk Hilbrecht said Guard members were removing abandoned vehicles and helping stranded motorists on I-65, 10 miles north and south of Elizabethtown, and on the Western Kentucky Parkway 10 miles west of Elizabethtown.

They also were taking stranded motorists on I-24 in Western Kentucky to what he called “warming centers.” In Marshall and Hardin counties, Hilbrecht said, Guard members were assisting ambulances on emergency runs.

There had been no reports of fatalities due to the weather, Beshear said.

And as of Thursday afternoon, the state had not experienced any widespread power outages, he said.

Traffic on I-24 was moving again in both directions by mid-afternoon Thursday in Lyon, Trigg and Christian counties, though much plowing and salting still was needed, transportation officials said.

The I-65 bottleneck near Elizabethtown was “beginning to loosen up” around noon, Beshear said, but transportation officials later said efforts to open northbound lanes were thwarted temporarily when two commercial trucks jackknifed at mile markers 71 and 75 in Hart County.

Compounding the emergency conditions on I-65 were blockages on other routes that ordinarily would have been established as detours: U.S. 31W, Bluegrass Parkway and Ky. 313 in Hardin County.

Making matters worse, officials from the Elizabethtown Highway District reported that some truckers and other motorists were refusing to allow tow operators to move their vehicles because of the cost of a tow.

The storm started with sleet late Wednesday, then turned to snow that moved east, dumping totals that ranged from 25 inches in Hardin County to 9 inches in Garrard County.

Hardin County emergency officials asked the National Guard for help early Thursday — before Beshear declared a statewide emergency — to help people whose cars were stuck in the massive I-65 traffic jam.

Eva Prewitt of Nelson County Emergency Medical Services said EMS couldn’t transport patients from a local hospital to other hospitals because the Bluegrass Parkway and I-65 in Hardin County were closed.

“We are only transporting people from residences if it is a life-or-death emergency,” Prewitt said. “To get to some residences, we have to get the county road department.”

In Frankfort, the Capitol shut down Thursday morning after a power outage that lasted several hours. Power was restored by about 10 a.m.

“People who have tried to get out have wound up in ditches. Others are driving way too fast,” Melton said.

Gentry Fitch and Nicole Fielder, seniors at West Jessamine High School and members of the Prichard Committee Student Voice team, were among those stranded in Frankfort at the Capital Plaza Hotel. They went to the Capitol on Wednesday to lobby for House Bill 236, which would allow school districts to add a student to superintendent screening committees.

“Although we are stuck in the Capital Plaza hotel with no hot water, we are making the best of this snow day,” Fitch said Thursday. “We are determined to do everything we can to lobby for our bill while here.”

Fielder said they had taken part in conference calls with the Prichard Committee all morning, and they hoped to meet legislators also staying at the same hotel.

“This is definitely a less than ideal situation,” Fielder said. “However, we came to Frankfort yesterday because we are so passionate about this issue, and there is no way we are going to let a little snow dampen our spirits.”

In Scott County, some exits and byroads along I-75 were blocked Thursday morning by big trucks, which had stopped because I-75 was shut down for a time in Northern Kentucky.

“There was no place for the trucks to go, and they were on the ramps,” said Charles Dedman, an officer with Scott County Emergency Management.

The same thing happened in Shelby County along I-64.

“There are significant problems on our on and off ramps from I-64,” Judge-Executive Rob Rothenburger said. “The semis try to get up the ramps and start spinning. We have law enforcement and wreckers working to keep the ramps clear from vehicles spinning out.”

“Most people are staying off the roads,” he said.

The governor also encouraged residents to check on elderly neighbors.

A statewide emergency declaration does not require schools or businesses to close. Beshear said Kentuckians should monitor local media for announcements of school or work closings.

Motorists stuck on Interstate 65 Tweeted about their experiences. The National Guard was sent to help. 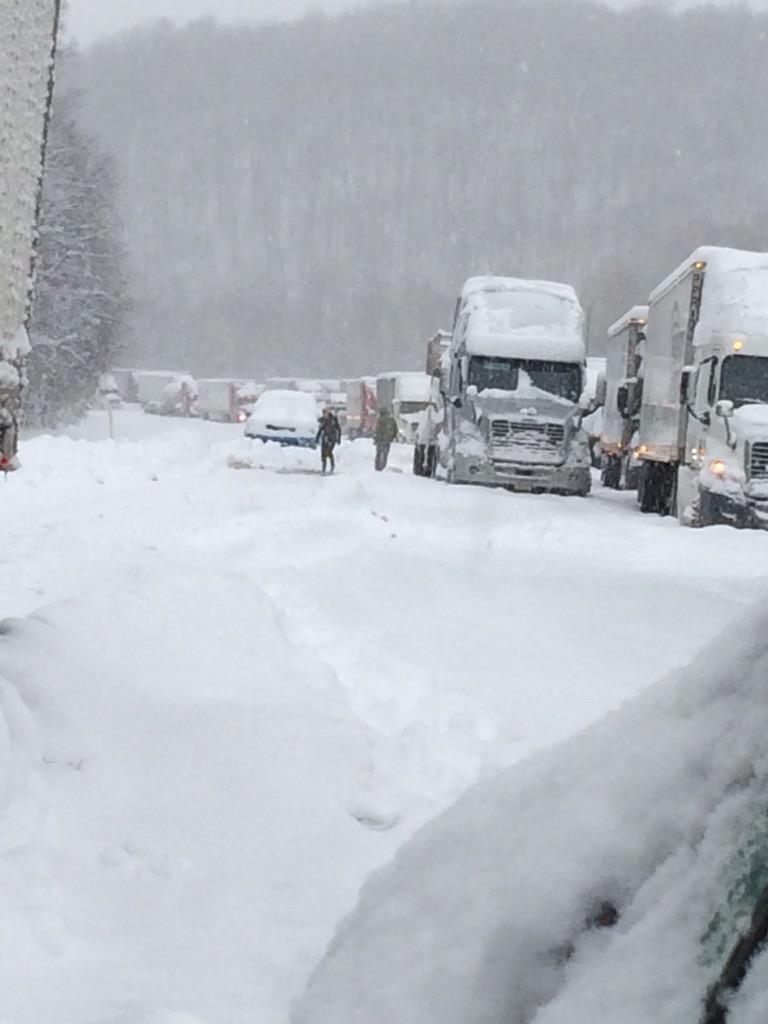 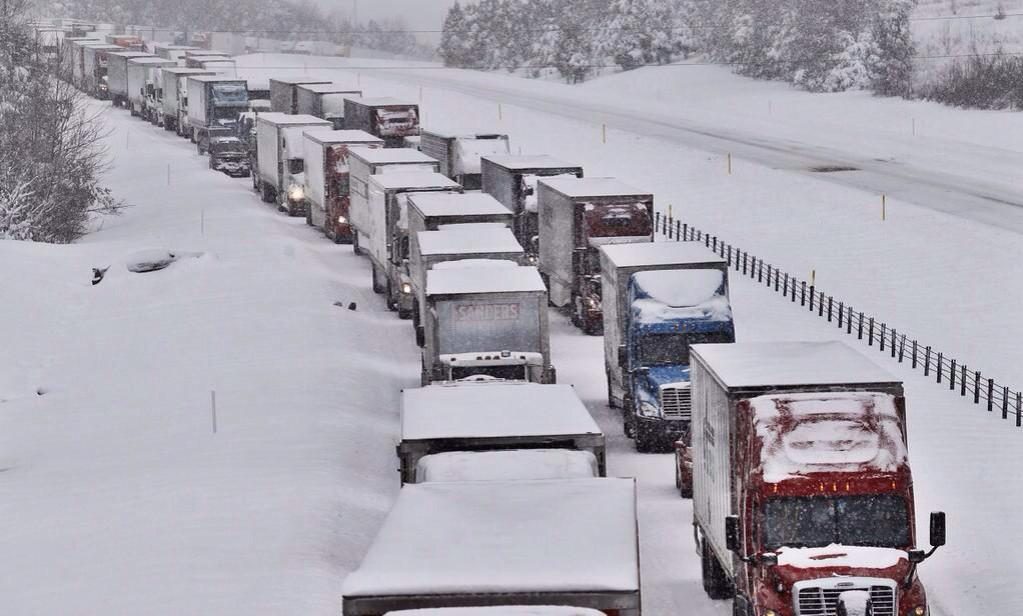