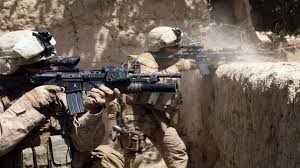 Foreign occupation forces are training and will be training to overrun this country in a martial law scenario. Why foreign troops? Because American troops might not be able to be counted upon to carry out the orders of subjugation that will come down from this globalist inspired banker-hijacked administration.

In the past several days, an enormous military exercise has become known to the public. This October over 36,000 troops from more than 30 countries will be gearing up for what NATO calls its largest exercise in over a decade and the exercise is called “TRIDENT JUNCTURE”

Here is a link to a video produced by NATO about TRIDENT JUNCTURE. Watch the video and then ask yourself, “What is missing?”

Were you able to answer the question? What is missing in this NATO report on TRIDENT JUNCTURE is that they do not tell you what kind of threat, or where the threat would be specifically coming from. As I have discovered, the answer to the question as to the location of TRIDENT JUNCTURE is that the drill could be carried out in one location, multiple locations anytime and anywhere.

According to NATO, the TRIDENT JUNCTURE DRILL (TJ 15) is put together in two parts. The CPX/CAX aspect of the drill will be conducted between the dates of October 3-16, 2015. However, this will follow three days what they are calling “battle staff warm-up” from September 30th to October 2nd. The official purpose of this drill is that it will serve as a “joint certification venue for NATO Response Force 2016 (NRF 16) and Full Operational Capability (FOC) event for JFCBS”. Please note the geographical location of these actions remains very vague.

NATO speaks of a complement to TRIDENT JUNCTURE in what is being called “LIVEX“. LIVEX will run from October 21st to November 6th. AIRCOM will be the leading component of the drill and it will involve over 200 aircraft from all NATO nations and they will perform in a specified training area in southern Europe. The importance of southern Europe will be explained in the conclusion part of this article.

The United States Army plans to cut 40,000 soldiers from its ranks over the next two years. Please keep in mind that the US military is war mode and the targets are primarily Russia and China. This is national suicide!

This is a reduction that will impact all of the Army’s domestic and foreign posts, as this was recently published from a collection of documents obtained by USA TODAY. If the United States is really on war footing, then these actions, led by President Obama, must be looked at under the lens of treason.n

Certainly, if the reduction in US military force is in diametrically opposite response to the foreign build up of troops on American soil, then Obama’s actions make perfect sense, although it is still undeniable treason. Why would the globalists want to diminish the size of the U.S. military? There are two reasons that come to mind. First, and in the long-term, America is supposed to lose World War III. Second, and in more in the immediate time frame, American troops may oppose an United Nations/NATO “Peacekeeping” force designed to restore order to an American public and military that will not accept the direct usurpation of national sovereignty. Reducing the size of the American military will reduce the size of the American threat to an United Nations takeover. If you dismiss this as idle speculation, than ask yourself why we are seeing the following on American soil?

Why Are Surface to Air Missile Batteries Popping Up Around Key Defense Faciities?

I am certain that many readers will recall when I first published photographs of these surface to air missiles in Texas. The photos came under a lot of criticism and skepticism.  However, the local media covered the event and the eventually the photos were vetted as authentic. My sources told me that these missiles were part of a defensive scheme to protect the nuclear waste disposal plant, PANTEX from low flying suicide aircraft whose goal it would be to take out the plant and create a holocaust in the region.

I have reports of similar missiles in Colorado, Missouri and Arkansas. Yesterday, I received photos of more surface to air missile batteries in northern Michigan near Camp Grayling, which is a known FEMA camp facility which also doubles as a training facility for security personnel headed to Guantanamo Bay.

Here is an email I received with regard to a very similar set of circumstances in which a missile launcher was places just outside of a major military aircraft maintenance plant.

We live on the old Whurtsmith AFB in Oscoda Michigan.  Kallita Aircraft company has maintenance facility here.  We’ve been seeing F-16s flying over and today heard C130’s. A local man just posted this picture,,,,,My husband is retired Air Force and we have been trying to monitor events in our area.  One comment on the posting is that the National Guard units from Grayling are having exercises.  But a missile launcher?????  Yikes

Foreign Troops Continue to Pour Into the United States

In May, I received and published information from trusted sources, that 36,000 Turks assigned to NATO were in the process of being sent to a variety of Texas bases.

I have also previously covered the fact that thousands of Danish soldiers trained at Camp Grayling in April.

Here is a second email on the topic of the construction of large number of barracks being constructed at Ft. Bliss. However, many of the troops at Ft. Bliss are gone and have redeployed to other duty assignments such as the Middle East. Why would they need additional housing facilities?

I am part of a construction crew who is overseeing a multi-company construction of barracks on Ft. Bliss. Some of them are temporary TDY that I have seen with disaster relief.  I estimate that the new facilities could house as many as 20,000 troops based upon my previous experience in these matters.

What is really strange is that the normal insignias etc. are missing from our construction sites that would normally be added. There is is nothing in this area of the base to indicate that this is a United States military facility. I have not personally seen military from other countries but there isn’t one of us on my team that does not think that this is the case here.  A fellow friend in the field saw the same at Lackland.  In light of what you have been writing on, I thought I would make this information available to you. For obvious reasons, please do not print my name.

Recently, WNEM TV in Michigan ran a story in which they noted that 3,000 Polish troops were training in the area. We have seen live combat drills in Flint, Michigan complete with explosions and troops movements. In fact, The Common Sense Show has produced documentation that could fill a book with regard to foreign troop activity on American soil.

No doubt that may of saw that yesterday the Obama administration announced that they were going suspend the gun rights of any Social Security recipient who was not the primary executor of their finances because they are obviously mentally infirm. An estimated five million guns could be confiscated. This is the kind of thing tyrants do before they implement martial law.  The VA has been used to go after Veterans guns. Now the Social Security administration is going after the guns of the elderly. Who is next?

In the coming NATO LIVEX drill, we see that southern Europe is identified as the training ground. There is every reason to believe that NATO’s TRIDENT JUNCTURE is involved in this region as well since the two drills are linked together in NATO documents. What countries comprise southern Europe? This is where the dots begin to connect. Southern Europe is comprised in part by the countries, also called Mediterranean Europe, that extends along the Mediterranean Sea on the Southern edge of Europe. It encompasses the major countries of Portugal, Spain, Italy, and Greece. Any listener to The Common Sense Show has heard me interview top economists (e.g. Joseph Meyer) who have said first Greece’s economy will fail first followed by Portugal, Spain, and Italy.

What do people do when their economies fail and they lose their money? They riot!

I recently wrote an article which I detailed how draconian the governments have become in these countries. For example, protesting outside of government buildings in Spain is now illegal. These are always preemptive moves governments with failing economies employ to stay in power. I think it is quite clear that TRIDENT EXPOSURE AND LIVEX drills are a multinational martial law force which is training to suppress revolution as these countries will soon experience an economic meltdown. This is a civil war prevention force.

The deployment of foreign troops on American soil is a gathering of the forces to accomplish the same objective as TRIDENT EXPOSURE AND LIVEX. However, as Steve Quayle mentioned on our July 19th interview, Steve said that America is entering into a civil war period. Steve is absolutely correct. As a case in point, these missile batteries we see that are deployed outside key defense facilities are speaking to the fact some officers in our military are moving to protect critical infrastructure military assets.

What does this all mean? It is likely that the concept of Jade Helm is international and joint international military forces will be used to subdue dissidents and uncooperative military forces in countries as they experience an economic meltdown. I think it likely that Jade is a subset, or a component part of the NATO drills. It is also very coincidental that these drills are taking place in such close proximity to each other. Does this point to an impending event? That is the simplest and mostly likely conclusion. Now we should be able to see where Jade Helm fits into these unfolding events.