EgyptAir Flight MS804 on route from Paris heading to its destination in Cairo, disappeared off radar over the Mediterranean Sea early this morning at a cruising altitude of 37,000. It had just passed through Greek airspace and was in Egyptian airspace for 3 minutes before it vanished from radar. Weather conditions were clear.

Sixty-six people were on board. 56 passengers and 10 crew members. 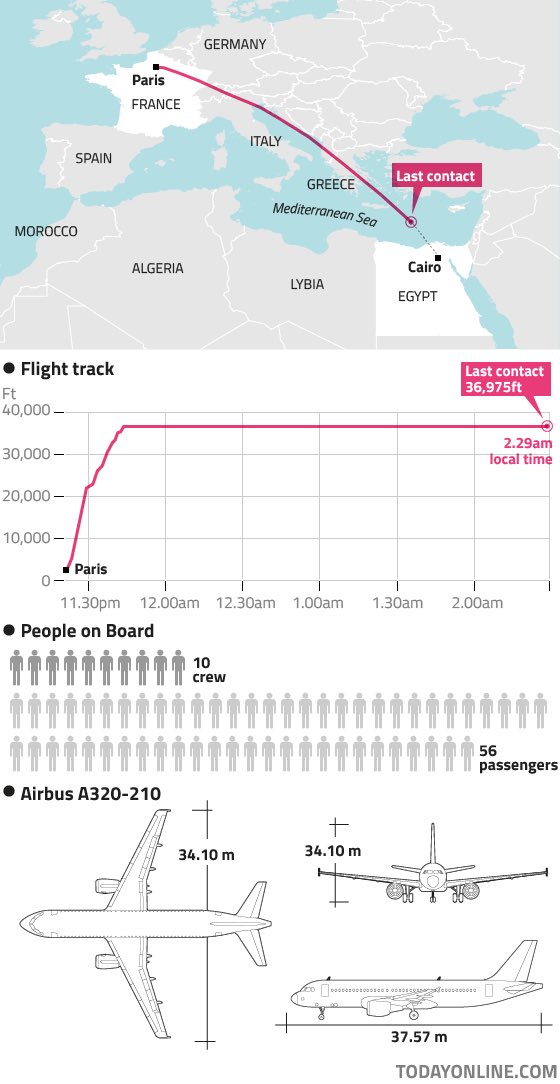 The captain of a merchant vessel reported seeing something burning in the sky at that location.

“The AFP news agency reports confirmation from a Greek aviation source that the EgyptAir plane crashed off the island of Karpathos. The captain of a merchant ship in the area had reported seeing a ‘flame’ in the sky and marine traffic monitors showed civilian vessels joining a search in the area.”Guardian

The area where the plane disappeared is heavily traveled by both air and sea traffic. Greek officials are investigating the reports from the Greek merchant vessel that said the explosion “lit up the sky”

I cannot but help to remember the two guided missile destroyers conducting drills in the South China Sea when Flight 370 was seen “burning in the sky” or the Israeli air combat drills taking place when Metrojet Flight 9268 blew up midair. I guess that’s because there are naval drills (Phoenix Express 2016) taking place in the Med. Sea from May 17 -27 and of course, they include guided missile destroyers.

There are persistent reports that some form of distress beacon was picked up by both Greek authorities and EgyptAir in that area roughly 2 hours after the plane dropped off radar though the Egyptian military denies these claims.

Mail online graphic shows the approximate site that debris from Flight 804 has been found. (Source)

The Daily Mirror is reporting the transponder has fixed the crash location. There is also a photo being published by the Daily Star which purports to show Flight MS804 burning in the night sky. Since it’s not confirmed I will not publish it.

What makes this case somewhat unique is the fact that there was no distress call from the plane and the fact that it disappeared off radar contact instantly. It didn’t drop out of radar coverage. It didn’t seem to slow down. It just vanished.

At 37,000 feet, there is little that could have happened to the plane short of:

MSM talking heads are focusing solely on the terrorism angle. France is in the middle of a massive nationwide protest and they have enacted their draconian emergency security laws in order to clamp down on protesters. The other day they staged a “burning cop car” production to gin-up support for these measures with the general public. Something else being accredited to “ISIS” would certainly not hurt their situation right now.

al Sisi is under pressure as well so the fact that the event took place 3 minutes into Egyptian airspace is of note because that means they are in charge of the investigation… not Greece.

Incident Concurrent with NATO naval drill in the Mediterranean.

Another element that this incident shares in common with several recent air disasters including MH370 and the destruction of Metrojet Flight 9268 over Egypt seven months ago is that it has taken place during the course of a large US led military drill.

Exercise Phoenix Express gets under way in Greece | Naval Today

In this case the drill is named Phoenix Express, it started two days ago and continues until May 27th and involves the naval forces of “Algeria, Egypt, Greece, Italy, Malta, Mauritania, Morocco, Spain, Tunisia, Turkey and the United States, representatives from the NATO Shipping Center, the International Organization for Migration (IOM) and the EU border management agency Frontex are taking part.” (Source)

This is Naval  Today’s description of the drill.

“This year’s exercise control group will be hosted at the NATO Maritime Interdiction Operations Training Center (NMIOTC) located in Souda Bay, Greece, but training will take place throughout the Mediterranean to include North African nations’ territorial waters.”

This story is still in the very early stages and no statements can be made with any confidence about this apparent tragedy nor about any possible motives. Egypt is currently fighting a low intensity guerrilla war in the Northern Sinai region and this may small war may well be a prelude to the full treatment Syria has received in recent years.

Egypt may be the next destination the puppet maniacs are sent to destroy on behalf of the West but whether any of that is linked to this incident is impossible to tell at this time.

All that said… we have very little information to go on right now except for this:

The international Phoenix Express 2016 naval exercises will take place May 17 – 27 in the Mediterranean Sea.

You might recall, in the vicinity of many of the most recent airline disasters, there were active military conflicts or drills taking place at the time the planes went down:

In the case of Metrojet Flight 9268, they put together a little band of whitebread jihadists who pretended to take credit for the downing of the plane.

do they get these kids straight out of acting school in Tel Aviv?

The USS Gravely is a Arleigh Burke-class guided missile destroyer with the motto “First To Conquer”. “Gravely was sent to patrol the eastern Mediterranean Sea in response to rising rumors of an imminent U.S. military intervention in the Syrian civil war”

The talking heads are focusing almost entirely on the “ISIS” theory at this point though they could attempt to portray it as something done by either Turkey or Syria (or “ISIS” flying Libyan planes?) There are so many regimes to change in the area, who knows how it will play out.

As more info becomes available, I will report on it.

Our condolences to the families of those lost in this horrible tragedy.

The Egyptian military has released the first images of the EgyptAir Flight 804 wreckage, showing mangled debris of life vests, seats and masks.

The Egyptian military has released the first images of the EgyptAir Flight 804 wreckage, showing mangled debris of life vests, seats and masks.

The wreckage, much of which bears EgyptAir’s logo, was posted on its Facebook page with the caption, “Side of the images found on the wreckage of the missing plane and some belongings of passengers.”

The images follow the release of new information by France’s BEA air accident investigation agency on Saturday morning, confirming that an EgyptAir jet sent a series of error messages indicating that smoke had been detected on board before crashing into the Mediterranean on Thursday.

“These messages do not allow in any way to say what may have caused smoke or fire on board the aircraft,” a spokesman for the agency said.
He added that the priority now was to find the two flight recorders, containing cockpit voice recordings and data readings, from the Airbus A320 which vanished from radar with 66 people on board.

“There was a fire on board,” aviation expert Tim van Beveren told Deutsche Welle. “The system sent very clear messages. There was lavatory smoke detected,” then a minute later, smoke in the avionics compartment, he said in an interview published late on Friday.
An official in the Egypt-led investigation commission denied the report. “In his last contact with air controllers five minutes before the crash, the plane’s pilot did not report anything unusual or a fire,” the official said on condition of anonymity because he was not authorised to talk to media.

“It is too early to determine the cause of the crash,” he said.

The smoke signals were reportedly sent via the ACARS, or Aircraft Communications Addressing and Reporting System, which transmits short condition updates to ground stations by radio or via satellite, the Aviation Herald reported, citing three independent sources.
Body parts, luggage and airline debris were retrieved on Friday from the Mediterranean Sea around 290 kilometres north of the Egyptian coastal city of Alexandria.

Search teams were Saturday scouring the area for more debris from the jet and its two black boxes.

In Paris, French Foreign Minister Jean-Marc Ayrault was to meet relatives of the 15 French victims, along with government and airline officials.

Three French aviation accident investigators and a technical expert from Toulouse-based manufacturer Airbus are currently in Cairo to join the investigation.

The airliner was flying at a height of 37,000 feet when it went missing about 45 minutes before its expected landing in Cairo.

Before disappearing from radar, data indicated the plane swerved sharply and then began to make a steep descent, the Greek defence minister said.