PHOTO: The bounce in support for Remain may have been in response to growing concerns about the economic impact of a so-called Brexit. (Reuters/Russell Boyce/Illustration/File Photo)
RELATED STORY: Meet the eight-year-old politician who wants Britain out of the EU
RELATED STORY: Let’s talk Brexit: Are the UK and the EU about to break up?
MAP: European Union

The campaign to keep Britain in the European Union has regained its lead in two opinion polls, giving a boost to Prime Minister David Cameron who is battling to avoid a historic Leave vote in Thursday’s referendum.

Another survey also showed a change in momentum in favour of the Remain camp and Mr Cameron got the backing of a leading newspaper when the right-leaning Mail on Sunday urged its readers to vote to remain in the EU.

Britain’s Sunday Times newspaper, however, called on its readers to vote to leave the European Union in Thursday’s referendum as a way to press for deeper reform of the bloc. 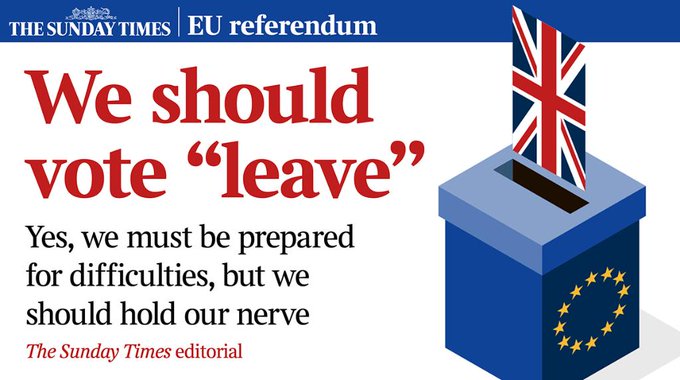 “Yes, we must be prepared for a bumpy ride, but we should hold our nerve. This vote may be the only opportunity we shall ever have to call a halt to the onward march of the centralising European project,” the newspaper said in an editorial.

Could Brexit be the world’s biggest break-up?

Few things are messier than a relationship on the rocks. And Britain’s 43-year marriage with the European Union could be about to come to a spectacular end.

The newspaper said it supported the idea floated by leading Leave campaigner Boris Johnson of Britain holding a second referendum after negotiations on further reform with Brussels.

Despite the editorial, a YouGov poll for the Sunday Times newspaper showed support for Britain staying in the EU had restored a narrow 44-43 per cent lead over the Leave campaign.

That poll was based on interviews conducted on Thursday and Friday, but the Sunday Times said the shift did not reflect the fatal attack on British MP Jo Cox on Thursday which led to the suspension of referendum campaigning.

Instead, the bounce in support for Remain was more a reflection of growing concerns among voters about the economic impact of a so-called Brexit, it said.

Another YouGov poll reported on Saturday but based on surveys conducted a bit earlier in the week showed the lead of the Leave campaign narrowing to two points.

“We are now in the final week of the referendum campaign and the swing back towards the status quo appears to be in full force,” Anthony Wells, a director with polling firm YouGov, said.