In a brilliant maneuver perfectly timed to complement his campaign revamp, Republican nominee Donald Trump today landed in Louisiana to witness first-hand the devastation wrought by flooding not seen there since Hurricane Katrina pummeled the Gulf Coast in 2005.

Trump’s arrival on the scene helps him on a number of levels. Most importantly, it provides a dramatic contrast to Hillary Clinton and President Obama, both of whom have neglected to visit a region where more than a dozen have died and tens of thousands have been forced out of their homes.

Acting like a leader who is there for average Americans is exactly what propelled Trump to the Republican nomination.

Trump’s move to see for himself the plight of disaster victims lends him a presidential aura that critics say he has been lacking due to off-the-cuff remarks that have, at times, sounded as crass and immature. Obama, the actual president, has responded absurdly, refusing to budge from the Martha’s Vineyard golf courses where he is playing nearly daily with celebrities and wealthy friends — even to issue a public statement, let alone visit the unfolding tragedy.

Though the press has barely noticed, Obama’s performance is demonstrably worse than that of George W. Bush during the 2005 Hurricane Katrina catastrophe, when Bush at least broke off his vacation and attempted to show some compassion by flying over the area to witness the devastation. He then actually landed on the scene a couple of days later to check up on the relief effort and offer moral support.

But he was nevertheless pilloried by the very same mainstream media that seem to think it is okay that Obama is dining out on overpriced seafood and tooling around in a golf cart while Louisiana residents are using rowboats to try to get to their homes and salvage their belongings.

Obama did take some time out from his R&R — to attend a fundraiser to raise money for politicians, of course, not beleaguered Cajuns.

Hillary Clinton’s decision not to head to Louisiana should probably feed speculation that she has something wrong in the head because of the inanity of the choice. Instead of showing compassion, she has two poorly timed fundraisers planned for Sunday — one in the vacation mecca of Provincetown on Cape Cod, where Cher will serve as the entertainment, and the other in Atlanta. Clinton has said very little about the tragedy, and like Obama, is said by aides to be “monitoring” the situation and receiving “updates.”

Clinton’s failure to do much of anything related to Louisiana may in part be driven by Obama’s determination to continue with his vacation at all costs. If she shows up and provides leadership, it highlights her friend Obama’s failure to do so and gives him less of an excuse for staying ensconced in his vacation abode, making her most valuable ally look bad.

Trump has been cast by Democrats and their allies in the mainstream media as a heartless demagogue lusting for power. His move to show compassion for a heavily African-American region that is suffering grievously shows a side of Trump that many, particularly his family, say they see all the time behind the scenes — a caring man who worries about individuals and is far less abrasive in private than he can seem on the stump.

Trump is also showing a flexibility that a president needs to display, suggesting he can turn on a dime and address a crisis as it develops and provide leadership.

Louisiana Gov. John Del Edwards immediately tried to diminish Trump’s move, suggesting he was there to stage a “photo-op.” But Trump countered by meeting privately with families who have been struck by the catastrophe, showing a keen interest in their plight that the president so far has not.

PHOTO: Thousands of people have been forced to take refuge in temporary shelter. (AFP: Joe Raedle)

Obama-appointed FEMA Administrator Craig Fugate sought to excuse Obama’s absence. “To move the president into a disaster area actually takes away some time from the response and the focus on saving people,” Fugate said, directly contradicting the criticism leveled at Bush in the aftermath of Katrina.

The Los Angeles Times, hardly a bastion of Trump support, reported that some Louisiana residents were eager to have Trump on hand.

“Trump is a businessman who knows for sure revitalization efforts. Why not” have him visit? said Sharon Bell, who lost her home. “I am going under. Mr. President. Please come. I need a hand up, not out,” she said.

Evacuee Faye Knighten agreed — and said Trump’s appearance would likely highlight the president’s absence, the Times reported. “That would be kind of screwed up if Donald Trump showed up before President Obama,” Knighten said from her cot.

Neither epic floods nor riots will part the president from his golf, seafood, or vacation 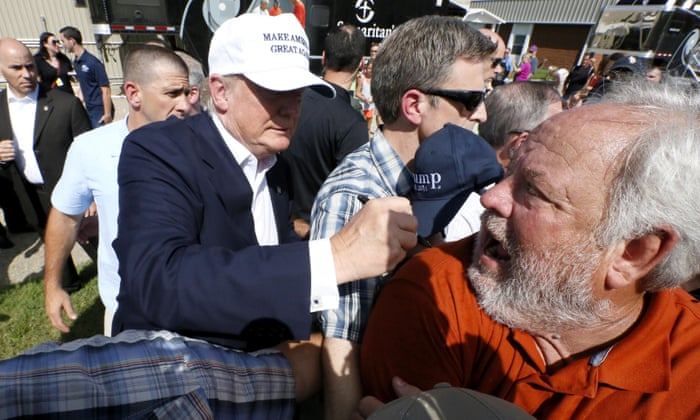 In East Baton Rouge Parish, Trump’s motorcade drove through hard-hit communities, where ripped-up carpet and flooring, furniture, and the entire contents of homes were piled on the curb, ABC News reported. People cleaning out their homes emerged to wave at the motorcade. Trump and Pence then met a group of volunteers at a Baptist church who have been cooking meals for flood victims and helping the elderly gut their homes, ABC wrote.

“Thank you for coming, Mr. Trump,” one woman screamed.

“We knew you would be here for us!” another shouted.

Acting like a leader who is there for average Americans is exactly what propelled Trump to the Republican nomination. If he keeps showing such concern and discipline by showcasing his empathy on a grander scale, like he is doing Friday in Louisiana, while Clinton and Obama demonstrate their aloofness, it may usher him into the White House.

Watch the polls. This could be a turning point.

Keith Koffler is the editor of the website White House Dossier

Trump Rolls Out a More Compassionate Side