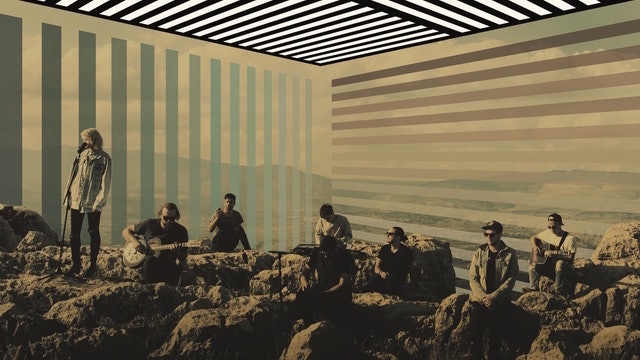 You will notice once again that Hillsong United and the promoters of their albums, continue to dabble in Illuminati symbolism, which makes me either completely paranoid, or they enjoy mocking and laughing at the masses, who see nothing apparently off or unusual in their cover designs.

Last time we saw this inversion was with their album –  Empires Upside Down Faith.

This new album is based on the idea of doing some previous songs from Empires in around Jerusalem.

Graphic 1 — Inversion: Upside down album- both the name ‘live from the land’ and band name ‘United’

Also note the bottom section of the square cut off to form a upside down pyramid, or square.

Graphic 2 — the above shows two pyramids overlaid as below.

Graphic 3 — Compass (black edge) at top of the floating square and bottom edge is the square in the album cover — in plain sight. Freemasonry’s corresponding typical square and compass here to illustrate point.

“Masons also use the two triangles to represent this idea of opposites. In Short Talk Bulletin, a pamphlet which is to be read in the Lodges, we are told that the triangles are symbolic of good and evil, day and night, the Chinese Yang and Yin …” [Dr. C. Burns, Masonic and Occult Symbols Illustrated, quoting Masonic publication, Short Talk Bulletin, “The Significant Numbers”, September, 1956, Vol. 34, No. 9, p. 5; also Wes Cook, Did You Know? Vignettes In Masonry from the Royal Arch Mason Magazine, Missouri Lodge of Research, 1965, p. 34]

I had always wondered about the distinctive black and white squares on Masonic floors, as depicted on Washington’s apron.  Now we know they represent the extremely Satanic concept of Yin and Yang, the “favorite of sorcerers”.  Masons also use two triangles joined together to represent Yin and Yang.  Therefore, their depiction of the Hexagram also depicts Yin and Yang.  We have described the sexual connotation to the Mason of the Hexagram, above.

Inverted symbols, as well as symbols that represent dark forces or black rituals, are sadly used all around us in a repeated, and apparently deliberate manner to convey a message and to put people under the very influences these symbols draw their forces from.

The Masonic Checkerboard is one of the most important symbols to the Illuminati, for it is used in ritualistic ceremonies. This is used because black and white is a symbol for duality, or the base of consciousness. Base consciousness is important, because it is where all other states of mind arise. Checkerboards are also symbols for the celebrities being pawns.

It is important to note that Duality patterns, such as checkerboards, stripes or zebras, are also commonly used as triggers for mind control slaves in order to reach specific alters.

In the following a series of Masonic photos from the Israeli Supreme Court building in Jerusalem will be  shown, a temple for the  Rothschild Antichrist to rule the world. They show the journey to illuminati status.

Apparently the Rothschilds intend to place the Ark of the Covenant in Solomon’s Temple in Jerusalem to legitimize their claim to be the Messiah (nobody knows if it still exists).

The pyramid on top of the parliament

The Freemason is committed to taking America in the direction of the New World Order. Since the square combines the vertical and the horizontal, it becomes a symbol of the material, physical realm which is enmeshed with spirit and time. The passage of time within an occultic spiritual context is what is in view here.

In this instance, Hillsong United are letting us know that Jerusalem in the physical realm is moving in time toward the desired direction of the New World Order.