Some impressive winter events have been taking place all across the northern hemisphere lately. Especially eastern and southeastern Europe have been pounded by massive snowfalls and tremendously cold temperatures. Turkey has been buried by heavy snows and extreme temperatures have gripped the entire USA and vast areas of Russia.

The global warming climate appears to have been hacked by natural factors.

Extreme cold and snow pound the northern hemisphere as some scientists warn of the potential for ice age conditions. Photo of Greenland by NASA (public domain)

These are all odd events when considering the “consensus” forecasts made 15 years ago, which warned that snow and ice would become rare.

In fact many scientists warned that Mediterranean conditions would spread into northern Europe. Lately, however, just the opposite has happened: Arctic conditions have plunged down into the Mediterranean!

Even worse, there is no end in site for the harsh European winter conditions, German mass circulation daily Bild writes here.

Warning of an impending ice age

So in the face of all the earlier global warming predictions, it is now only ironic that yesterday the German-language Pravda TV site here published an article warning of an impending ice age. The article cites Yale scientist Wei Liu and a recent paper he published on the “overlooked possibility of a collapsed Atlantic Meridional Overturning Circulation“. Should the ocean heat conveyor collapse, then there would be “a prominent cooling over the northern North Atlantic and neighboring areas, sea ice increases over the Greenland-Iceland-Norwegian seas and to the south of Greenland.”

CO2 has nothing to do with it, rather the influence of the sun is the dominant factor: less sunspots (Climate: solar physicists project global cooling (video)), weakening of the earth’s magnetic field, impact on the jet stream are decisive factors that can quickly lead our climate into an ice age (Scientists: Consensus 2016: the climate models are useless (Video)).”

Flashback 2014: Scientists and Studies predict ‘imminent global COOLING’ ahead – Drop in global temps ‘almost a slam dunk’ – Growing number of scientists are predicting global cooling: Russia’s Pulkovo Observatory: ‘We could be in for a cooling period that lasts 200-250 years’ – Danish Solar Scientist Svensmark declares ‘global warming has stopped and a cooling is beginning…enjoy global warming while it lasts’

Two satellite datasets agree: The Pause lives on: ‘No warming for the last 18 years’

RSS Confirm 2016 Is Tied With 1998 As Warmest Year -As Roy Spencer has pointed out, the margin of error is 0.1C, so statistically 2016 is tied with 1998 as the warmest year in the satellite record. The fact that there has been no warming for the last 18 years is a massive blow to the credibility of climate science.

EL NINO WARMING DOES NOT MEAN THE END OF THE ‘PAUSE’ 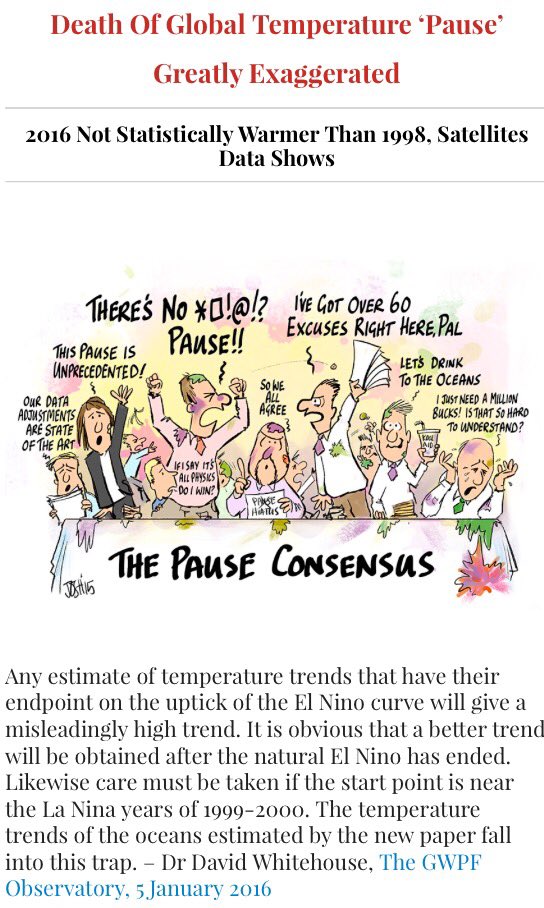 2016 Not Statistically Warmer Than 1998, Satellites Data Shows – Dr David Whitehouse: ‘Any estimate of temperature trends that have their endpoint on the uptick of the El Nino curve will give a misleadingly high trend. It is obvious that a better trend will be obtained after the natural El Nino has ended. Likewise care must be taken if the start point is near the La Nina years of 1999-2000. The temperature trends of the oceans estimated by the new paper fall into this trap.’

Dr. Judith Curry: ‘The hiatus is still going strong in the satellite dataset’

Meteorologist Anthony Watts: ‘Yet another study tries to erase “the pause” – but is missing a whole year of data’