I took two deep breaths, then a tattooed piercer called Andy stabbed me in the fleshy part of my hand between the forefinger and thumb, injecting a tiny microchip encased in a glass capsule the size of a large grain of rice. And so I became the world’s lamest cyborg.

The radio-frequency identification (RFID) chip, once registered, allows me to open doors, unlock computers and pay for items – provided those systems use the right software and have dedicated contactless chip readers. 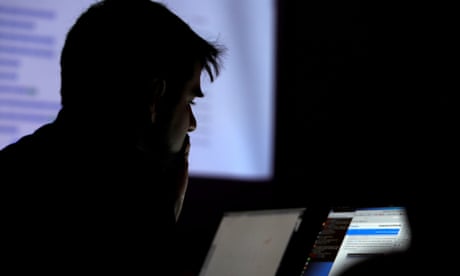 For now, that means that I can buy a KitKat from a vending machine in the canteen of a company called Three Square Market, based on the outskirts of River Falls, Wisconsin.

The company, which provides self-service “micro-markets” to businesses around the world, became the first in the US to offer these implants to all of its employees and a handful of journalists at a “chip party” this week.

The idea came earlier this year when the company’s vice-president of international development, Tony Danna, visited a co-working space calledEpicenter in Sweden, which has been chipping staff since 2015.

“I was trying to sell them a market, but I was so intrigued by the chips,” he told the Guardian.

When he came back to Wisconsin, there was a “lot of excitement” about the technology among his colleagues, and the company decided to explore its potential, starting by chipping its own employees and experimenting with building custom software to trigger a range of experiences.

“When we saw it being used by other societies we thought, why not us?” said the president and COO, Patrick McMullan, while acknowledging that the applications for the technology are fairly limited. “Who knew mobile phones would be what they are? Or driverless cars? It’s not just doors and self-checkouts.”

The program is entirely voluntary, but more than 50 of the company’s 80 staff have already signed up.

Katy Langer, a marketing executive, did not. “My concern is health effect. What’s going to happen down the road.”

“I didn’t like the idea of a foreign object going into my body, and I’m not a fan of needles,” added sales director Melissa Timmins, who was wary of the implant before changing her mind. “I did my research, and I’m now so excited abut what the possibilities are and where we’re going to take this.”

Until Tuesday’s chip party, the biggest thing to happen to River Falls, a town with just 15,000 inhabitants, was its annual parade, with marching bands and beauty queens rolling through town. But now the world’s media has descended – something Three Square Market hadn’t expected but is clearly thrilled by. The company even commissioned “I’ve been chipped” T-shirts to hand out to participants as an Instagrammable promotional tool.

Willing guinea pigs first signed waivers before lining up for Andy to carry out the procedure in a room packed with about a dozen TV cameras, journalists and Three Square Market staff. Along one side of the room was a long table with drinks and snacks, including an improbably large plate of pickles, salsa and, in keeping with the theme, bowls of chips.

The non-edible chips are similar to those implanted into the scruff of dogs’ and cats’ necks so they can be identified if they are stolen or run away, but with a little more memory for storing data.

The human chips are sold by a Swedish company called Biohax International, founded by Jowan Österlund, who said he was inspired by 1995 movie Johnny Mnemonic, in which Keanu Reeves plays a man who stores sensitive data in an implant. “That was it,” he told USA Today. “Ever since, I wanted to do this.”

In science fiction movies, microchips implanted under the skin are used to track individuals through dystopian metropolises – rather like a GPS device. However, as with pet microchip technology, that’s not how it works. The implant is entirely passive, which means it has no power source and only becomes active when it is within a couple of inches of a reader. Think of it like a contactless credit or transit card. In terms of cyborg functionality, I’m much closer to a key fob than RoboCop.

Where this kind of chip could be used for tracking is at the back end – by collecting data every time an employee makes a purchase, uses the photocopier, or enters the building.

When pressed on what the other applications could be, the company suggested that people could put their medical records or passport data on chips. More advanced chips with their own power sources could eventually be used for GPS tracking.

“We’ve had interest from parents of young kids who want to be able to implant their children with a GPS chip,” said Westby.

Almost all of the possible applications can be achieved through other means, like smart wristbands, ID cards or Apple Pay. Even without any gadget, there’s still biometric technology such as fingerprint scanning or facial recognition that is cheaper and doesn’t require a minor surgery.

To find out about some of the longer-term applications, the Guardian caught up with several biohackers, journalists and artists who have had implants for at least a year. For most of them, it’s little more than a gimmicky talking point.

Implants have not altered our experiences of technology the way smartphones, face-detection or social media have

Artist Meghan Trainor (not the singer), however, explored ideas of “human-machine interfaces, cyborg tropes, surveillance and bodily autonomy” for four years after she had her RFID chip implanted in 2003.

It now functions as “a poetic example of abandonware”, she said, referring to software no longer sold or supported by its creator. She says she’s “fairly certain” she’ll explore it as a “vintage interface” some time in the future.

“But implants have not really significantly altered our experiences of technology the way smartphones, face-detection, hell even social media, have in the intervening years.”

Zoltan Istvan, former presidential candidate and known transhumanist who had a chip implanted in 2015, is more bullish. “As a surfer and a jogger, it’s such a pain to carry around keys. It’s far easier just to have a chip. It’s not a gimmick at all in my opinion.”

To get mainstream adoption there will need to be a standardised payment protocol to allow individuals to swipe their hands across any reader – not just the one in the Three Square Market office – instead of using their credit card, said Istvan. “This is a multibillion-dollar market waiting to explode.”

The closest these chips have come to anything like mainstream adoption is in Sweden, where Biohax International says it has implanted about 3,000. The most popular application is as a replacement for a contactless smartcard on theSwedish railway system.

Österlund says the technology is better than biometrics because you do not run the risk of losing your fingerprint to hackers. The chip, unlike your fingerprint or your face, can always be replaced or reconfigured.

But the chip attracts the wrath of some fundamentalist Christians, who see it as the “mark of the beast”. The fear stems from a passage in the Bible’s book of Revelation, where it talks of the mark of the beast on the forehead or right hand.

Österlund sought to address these concerns in a “respectful fashion” by consulting members of the clergy and theologians. His inquiries found that word for “mark” comes from the original Greek word for “stigma”, which can be translated as branding, scarification or tattoo, “but definitely not a biocompatible capsule with NFC circuitry”, said Österlund.

Furthermore, he said, most people have the implant in their left hand; Satan prefers the right. Such logic hasn’t stopped countless people send emails, Facebook messages and creating YouTube videos telling him he’s doing Satan’s work – but it doesn’t faze him.

These people are mad – we give away our souls for the latest piece of tech or some other fashion accessory.

The fact that a tattoo artist injected the chip says it all!!