Kim called Trump “a rogue and a gangster fond of playing with fire” after the President’s threat, earlier this week, to “destroy” North Korea.

North Korean leader Kim Jong Un, in an extraordinary and direct rebuke, called President Donald Trump “deranged” and said he will “pay dearly” for his threats, a possible indication of more powerful weapons tests on the horizon.

Hours later, North Korea’s foreign minister reportedly said his country may test a hydrogen bomb in the Pacific Ocean to fulfill Kim’s vow to take the “highest-level” action against the United States.

Kim, in his statement, said Trump is “unfit to hold the prerogative of supreme command of a country.” He also described the U.S. president as “a rogue and a gangster fond of playing with fire.”

The dispatch was unusual in that it was written in the first person, albeit filtered through the North’s state media, which are part of propaganda efforts meant to glorify Kim. South Korea’s government said it was the first such direct address to the world by any North Korean leader.

Some analysts saw a clear sign that North Korea would ramp up its already brisk pace of weapons testing, which has included missiles meant to target U.S. forces throughout Asia and the U.S. mainland.

“I will make the man holding the prerogative of the supreme command in the U.S. pay dearly for his speech calling for totally destroying the DPRK,” said the statement carried by North’s official Korean Central News Agency on Friday morning.

DPRK is the abbreviation of the country’s official name, the Democratic People’s Republic of Korea.

North Korean Foreign Minister Ri Yong Ho told reporters on the sidelines of a United Nations gathering that his country’s response “could be the most powerful detonation of an H-bomb in the Pacific,” according to South Korea’s Yonhap news agency.

Ri reportedly added that “We have no idea about what actions could be taken as it will be ordered by leader Kim Jong Un.”

Such a test would be considered a major provocation by Washington and its allies.

Japanese Defense Minister Itsunori Onodera noted such a test could mean a nuclear-armed missile flying over Japan. He said North Korea might conduct an H-bomb test with a medium-range or intercontinental ballistic missile, given its recent advances in missile and nuclear weapons development.

“We cannot deny the possibility it may fly over our country,” he said.

Vipin Narang, a nuclear strategy expert at MIT, said that such a test could pose a danger to shipping and aircraft, even if the North declared a keep-out zone.

“And if the test doesn’t go according to plan, you could have population at risk, too,” he said. “We are talking about putting a live nuclear warhead on a missile that has been tested only a handful of times. It is truly terrifying if something goes wrong.”

The statement by Kim Jong Un responded to Trump’s combative speech at the U.N. General Assembly on Tuesday where he mocked Kim as a “Rocket Man” on a “suicide mission,” and said that if “forced to defend itself or its allies, we will have no choice but to totally destroy North Korea.”

He said Trump’s remarks “have convinced me, rather than frightening or stopping me, that the path I chose is correct and that it is the one I have to follow to the last.”

Kim said he is “thinking hard” about his response and that he would “tame the mentally deranged U. S. dotard with fire.”

Kim Dong-yub, a former South Korean military official who is now an analyst at Seoul’s Institute for Far Eastern Studies, said Kim Jong Un’s statement indicated that North Korea will respond to Trump with its most aggressive missile test yet. That might include firing a Hwasong-14 intercontinental ballistic missile over Japan to a range of around 7,000 kilometers (4,349 miles) to display a capability to reach Hawaii or Alaska.

The statement will further escalate the war of words between the adversaries as the North moves closer to perfecting a nuclear-tipped missile that could strike America.

In recent months, the North has launched a pair of still-developmental ICBMs it said were capable of striking the continental United States and a pair of intermediate-range missiles that soared over Japanese territory. Earlier this month, North Korea conducted its sixth and most powerful nuclear test to date drawing stiffer U.N. sanctions.

South Korea called Kim Jong Un’s rebuke a “reckless provocation” that would deepen his country’s international isolation and lead to its demise.

Japan must brace itself for the possible launch of a nuclear-armed North Korean missile over its territory if the regime carries out a threat to test a hydrogen bomb in the Pacific Ocean, Japan’s defence minister has said.The warning followed an extraordinary exchange of insults between Donald Trump and Kim Jong-un in response to the US president’s threat at the UN general assembly to “totally destroy” North Korea if Washington was forced to defend itself or its allies.

Kim said that he was considering retaliating at the “highest level”, calling Trump a “mentally deranged US dotard” who would “pay dearly” for threatening to destroy his regime. The North Korean foreign minister, Ri Yong-ho, suggested Pyongyang could test a powerful nuclear weapon in the Pacific.

“It could be the most powerful detonation of an H-bomb in the Pacific,” Ri, who is due to address the UN general assembly at the weekend, told reporters in New York. “We have no idea about what actions could be taken as it will be ordered by leader Kim Jong-un.”

Trump tweeted in response on Friday: “Kim Jong Un of North Korea, who is obviously a madman who doesn’t mind starving or killing his people, will be tested like never before!”

Itsunori Onodera, the Japanese defence minister, warned such a test could involve a nuclear device mounted on a medium-range or intercontinental ballistic missile being flown over Japan. “We cannot deny the possibility it may fly over our country,” he said.

Speculation is growing that North Korea will add to its robust verbal response to Trump’s UN speech on Tuesday with a military provocation, possibly a test of a Hwasong-14 missile, which is theoretically capable of reaching Hawaii and Alaska.

Chung Sung-yoon, an analyst at the Korea Institute for National Unification, said there was a “very high possibility” that Kim would follow through with a provocation of some sort.

While the North has claimed it is able to mount a miniaturised nuclear weapon on a missile, the regime has yet to offer definitive proof.

The US and Japan have warned they will shoot down any missile they consider a threat to Japanese territory.

Monitoring groups estimate that the nuclear test conducted in North Korea this month – its sixth and largest – had a yield of 250 kilotons, which is 16 times the size of the US bomb that destroyed Hiroshima in 1945.

In a statement carried by the official KCNA news agency, Kim called Trump “mentally deranged” and warned him that he would “pay dearly” for issuing threats to the regime during his maiden UN general assembly speech on Tuesday.

Describing the president as “a rogue and a gangster fond of playing with fire”, Kim drew a critical comparison between Trump and his predecessors in the White House, calling him unfit to hold the position of commander in chief.

“Far from making remarks of any persuasive power that can be viewed to be helpful to defuse tension, he made unprecedented rude nonsense one has never heard from any of his predecessors.”

In a combative speech, Trump warned he would “totally destroy” North Korea if it attacked the US or its allies, and called on other countries to cut the regime off from its sources of funds.

“The mentally deranged behaviour of the US president openly expressing on the UN arena the unethical will to ‘totally destroy’ a sovereign state … makes even those with normal thinking faculty think about discretion and composure,” Kim said.

The North Korea leader is thought to be the first of three generations of the Kim dynasty to publicly read out a statement aimed at the international community in his own name.

Kim said Trump’s remarks had convinced him “that the path I chose is correct and that it is the one I have to follow to the last”.

He added that he was “thinking hard” about his response, but vowed that Trump would “pay dearly for his speech calling for totally destroying” North Korea.

“Action is the best option in treating the dotard, who, hard of hearing, is uttering only what he wants to say,” he said.

“Now that Trump has denied the existence of and insulted me and my country in front of the eyes of the world and made the most ferocious declaration of a war in history that he would destroy [North Korea], we will consider with seriousness exercising of a corresponding, highest level of hard-line countermeasure in history.”

His lengthy criticism of Trump ended: “I will surely and definitely tame the mentally deranged US dotard with fire.”

Reuters reported earlier in the day that China’s central bank had ordered financial institutions to implement UN sanctions rigorously after frequent complaints from Washington that Beijing was leaving open too many loopholes. 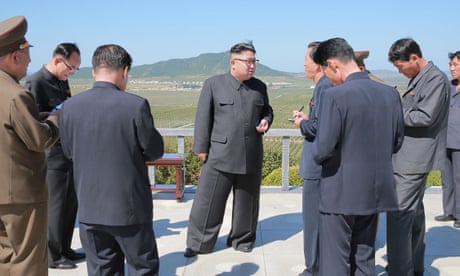 There was no immediate confirmation from the Chinese government that it had imposed a financial embargo on North Korea. If confirmed, it would represent a significant tightening of the economic noose around the Pyongyang regime, by a country which accounts for 90% of its trade.

But it is unclear whether any amount of financial or economic pain would induce Kim Jong-un to relinquish North Korea’s nuclear weapons and missiles, which he believes are essential for the regime’s survival.

“Our new executive order will cut off sources of revenue that fund North Korea’s efforts to develop the deadliest weapons known to humankind,” Trump said. “The order enhances the treasury department’s authorities to target any individual or entity that conducts significant trade in goods, services, or technology with North Korea.”

Under the new measures, no ship or aircraft can visit the US within 180 days of going to North Korea. The same restriction would apply to any vessel involvement in ship-to-ship transfers with North Korean vessels. The order gives the US Treasury the power to sanction anybody involved in a wide variety of North Korean industries, ports, trade, and banking.

“Foreign financial institutions must choose between doing business with the United States or facilitating trade with North Korea or its designated supporters,” a White House statement said.

“To prevent sanctions evasion, the order also includes measures designed to disrupt critical North Korean shipping and trade networks,” he said. “For much too long, North Korea has been allowed to abuse the international financial system to facilitate funding for its nuclear weapons and missile programs.”