The only supermoon of 2017 will appear in a sky near you Sunday night … weather permitting.

Bigger and brighter than a typical full moon, the term “supermoon” was coined in 1979 by astrologer Richard Nolle. According to NASA, it’s used by the media today to describe what astronomers would call a perigean full moon: a full moon occurring near or at the time when the moon is at its closest point in its orbit around Earth.

A supermoon can appear as much as 14% bigger and 30% brighter than when a full moon is at its farthest distance from Earth, NASA said.

The astronomical term for a supermoon is “perigee syzygy.” (Syzygy is when the sun, moon and Earth are all aligned in a straight line.) 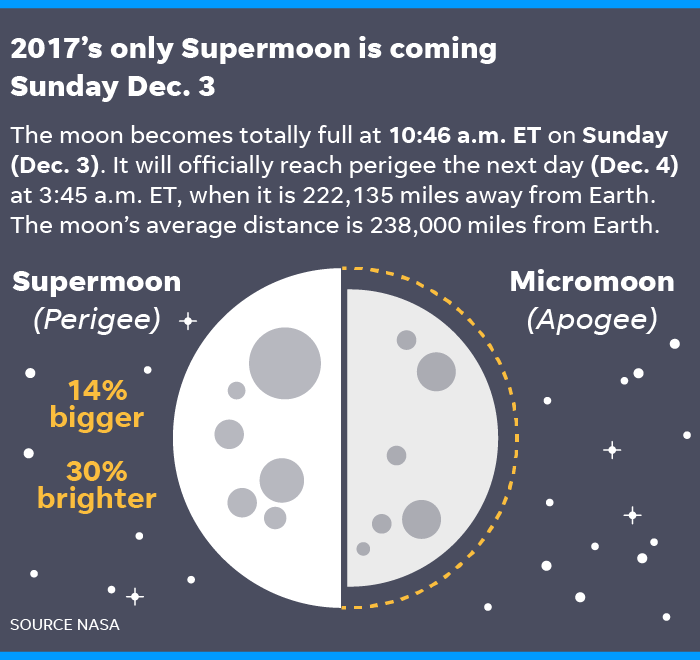 At that moment, the moon will not be visible over most of North America. However, the moon will still appear plenty big when it rises in the eastern sky Sunday evening.

Due to the optical effect known as the moon illusion, the full moon can seem huge when rising behind distant objects on the horizon. A supermoon appears especially impressive.

Clear skies are forecast across much of the eastern U.S., except for New England and around the Great Lakes, the National Weather Service said. Elsewhere, clouds could obscure the view in the upper Midwest, northern Plains, Rockies and Northwest.

The December full moon, even when its not a supermoon, is known as the cold moon.

If you miss this one, however, don’t fret: The first two full moons of 2018 will be supermoons.

Just over a year ago, we enjoyed an especially large supermoon:

The end of World War II also brought with it another step toward the dissolution of European empires and colonialism in general.

With that, there was a very significant development this year in the Middle East that, in part, occurred because of the lessening grip of European rule in the region.

In May of 1948, Israel declared independence, and this sparked the 1948 Arab-Israeli War.

During this conflict, the countries of Egypt, Transjordan, Syria, and Iraq sent military forces against Israel. When this occurred, formal British control over the region was truly finished.

In yet another event that helped bring some closure to the Second World War, in November of this year, an international war crimes tribunal sentenced seven Japanese government and military officials to death for their role in war crimes committed during World War II by the Japanese Empire.

But more importantly what may happen in 2018?