Update: We have a new tweet from President Trump on Iran this morning. We also have one from Ayatollah Ali Khamenei blaming the Deep State.

The people of Iran are finally acting against the brutal and corrupt Iranian regime. All of the money that President Obama so foolishly gave them went into terrorism and into their “pockets.” The people have little food, big inflation and no human rights. The U.S. is watching! 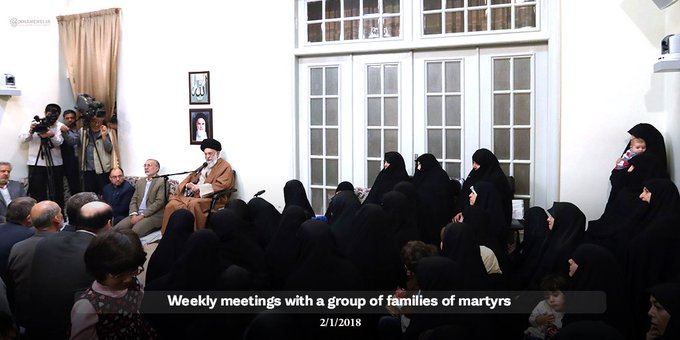 In recent events, enemies of #Iran have allied & used the various means they possess, including money, weapons, politics &intelligence services, to trouble the Islamic Republic. The enemy is always looking for an opportunity & any crevice to infiltrate &strike the Iranian nation.

In light of the events in Iran, I have been doing some reading to refresh my memory of how the CIA overthrew the nationalist government of Mohammad Mossadeq in 1953. This excerpt comes from Sandra Mackey’s book, The Iranians: Persia, Islam and the Soul of a Nation:

“Meanwhile in Tehran, thirty-seven-year-old Kermit Roosevelt, the twelve-thousand-dollar-a-year head of the CIA’s Middle East operations and grandson of Teddy, had released the trigger on “Operation Ajax.”

Employing bribery and contacts provided by British intelligence in the police, armed force, and the bazaar, he deftly wove together a royalist coalition of the aristocracy, industrialists, major merchants, disillusioned members of the National Front and the handful of political clerics who had joined Mossadeq in 1951. On August 18, the day the shah arrived in Rome, the Iranian army, reacting to the possibility that the Tudeh might for the next government, came out of the barracks to crush street demonstrations in the name of the shah.

With the army secured, Roosevelt sent a throng hired in south Tehran for one hundred thousands dollars marching toward Mossadeq’s office in the heart of the city …

The coup triumphed with a speed that surprised even its most ardent supporters. With nine hundred thousand of the million dollars originally set aside for Operation Ajax remaining, Kermit Roosevelt and the royalist coalition surveyed the realm of Muhammad Reza Shah cleansed of those who threatened the throne.

In Rome, the man under whose name the coup was staged sat with his wife at lunch in the dining room of the Excelsior Hotel. They were ignorant of events in Tehran until a young reporter from the Associated Press rushed to the table and handed the shah a piece of paper from the wire. “Mossadeq overthrown. Imperial troops control Tehran.” Soraya burst into tears. Muhammad Reza Shah went pale and reportedly whispered, I knew that they loved me.”

Acting on the orders of President Dwight Eisenhower, Kermit Roosevelt hired the mob that overthrew Mossadeq for a hundred thousand dollars. The shah was out of the loop.

The driving force behind the coup was the Cold War with the Soviet Union.