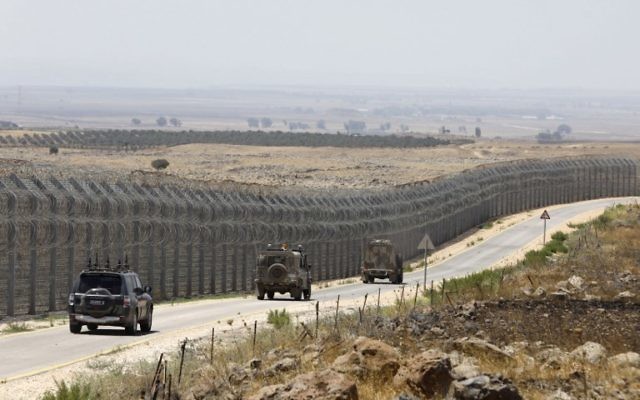 IDF vehicles driving along the road parallel to the border fence separating the Israeli and Syrian regions of the Golan Heights, July 19, 2017. (AFP/MENAHEM KAHANA)

Iranian-backed forces in Syria could be left as close as five kilometers to the Israeli border under the terms of a ceasefire agreement hammered out between the US, Russia, and Jordan, according to a report this week.

Israel has indicated that it is unhappy with the terms of the agreement.

An Israeli official said that, under the deal, militias associated with Iran would be allowed to maintain positions as little as five to seven kilometers (3.1-4.3 miles) from the border in some areas, Reuters reported Monday.

In other areas, the Iranian-allied forces would be pulled back as far as 30 kilometers from the border, explained the official, who spoke with the news agency on condition of anonymity. The final arrangements will depend on the current positions held by rebel forces fighting against the Assad regime on the Syrian part of the Golan Heights.

According to media reports, the deal applies even to Iranian proxies fighting on behalf of Syrian President Bashar Assad’s regime. 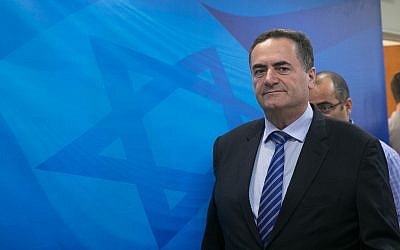 Israeli intelligence minister Yisrael Katz refused to confirm those details but Israeli authorities have indicated the agreement does not go far enough in moving Iran and affiliated militias away from the Israeli border.

“Even though we view favorably the agreement on the need to eliminate the foreign forces — namely, the Iranian forces, Hezbollah and the Shiite militias from the area — the test will be on the ground, not in words but in deeds. Israel has already made it clear that it shall not accept Iran and its affiliates and proxies basing themselves in Syria, which will be a permanent threat and a constant source of tension, friction and instability,” Katz said Monday.

Israel has lobbied against allowing Iran to maintain any foothold in Syria.

On Saturday, Defense Minister Avigdor Liberman said Israel “will not allow the Shiite axis to be established in Syria as a base for action,” after new photos were published of a permanent Iranian base being built some 50 kilometers from the Israeli Golan Heights. 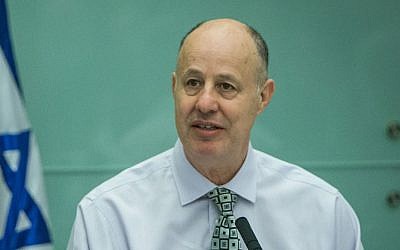 On Sunday, minister Tzachi Hanegbi said  the agreement “does not answer Israel’s unequivocal demands that there will be no developments that bring Iranian or Hezbollah forces closer to Israel’s border with Syria in the north.”

The Israeli official who spoke to Reuters said the deal is intended to keep rival Syrian factions from clashing with each other but will also control the presence of Iranian proxies.

The agreement, announced in a US-Russian statement Saturday, affirms a call for “the reduction, and ultimate elimination” of foreign fighters from southern Syria. 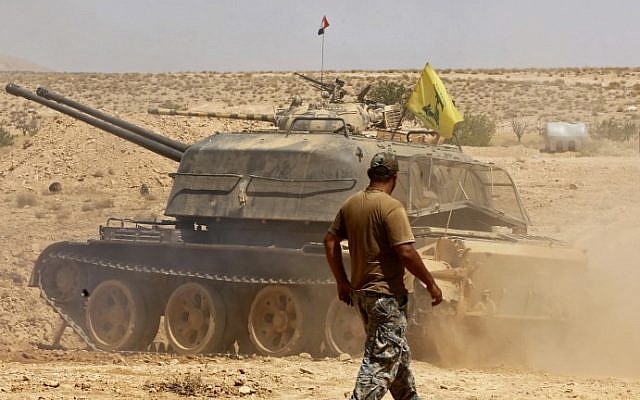 A tank flying the Hezbollah terror group’s flag is seen in the Qara area in Syria’s Qalamoun region on August 28, 2017.(AFP Photo/Louai Beshara)

Prime Minister Benjamin Netanyahu has in the past voiced concerns over Iran’s plans to cement its presence in Syria, which, he has said, include the establishment of naval and air force bases.

Jordanian government spokesman Mohammad Momani confirmed Sunday no non-Syrian fighters would be allowed in the “de-escalation zone” under the agreement, which he said was built on a previous ceasefire reached in July.

He also said the deal was a “key step” in ending the fighting in Syria and would help lead to a political solution to the Syrian civil war, according to the country’s al-Ghad newspaper.

The reports on the new ceasefire agreement came after the BBC published satellite photos on Friday said to show the construction of a permanent Iranian military base in Syria.

According to the BBC report, the base is situated at a site used by the Syrian army near El-Kiswah, 14 kilometers (8 miles) south of Damascus, and 50 kilometers (30 miles) from the Israeli border. 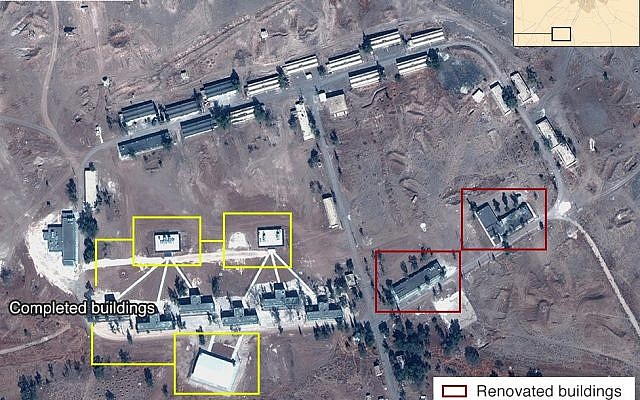 In July, the Times of London reported that Israel was pushing Russia and the US for an agreement that would prevent “Hezbollah or other Iranian-backed militias” from operating in the area, which would extend some 30 miles (48 kilometers) beyond the Israeli-Syrian border on the Golan Heights.

Hezbollah, the Lebanese terror group that acts as a proxy of Iran, has been fighting on behalf of the Syrian President Bashar Assad in his efforts to suppress a six-year long insurgency. Russia, an ally of both Syria and Iran, has also provided military assistance in the war.

In recent years there have been several airstrikes inside Syria, attributed to the Israel, that targeted alleged shipments of advanced weapons and rockets for Hezbollah. Israel has vowed to prevent the Shiite organization, which holds positions along Israel’s northern border with Lebanon, from obtaining game-changing weaponry.

In August Netanyahu met with Russian President Vladmir Putin in Sochi, Russia, and entreated him to curb Iranian military expansion in Syria.

On Friday Pravda reported that while Putin told Netanyahu at their talks that “Israel is also an important partner for Russia in the region,” he stressed that “Iran is Russia’s strategic ally in the Middle East” and declined to abandon Russia’s alliance with the Islamic Republic.