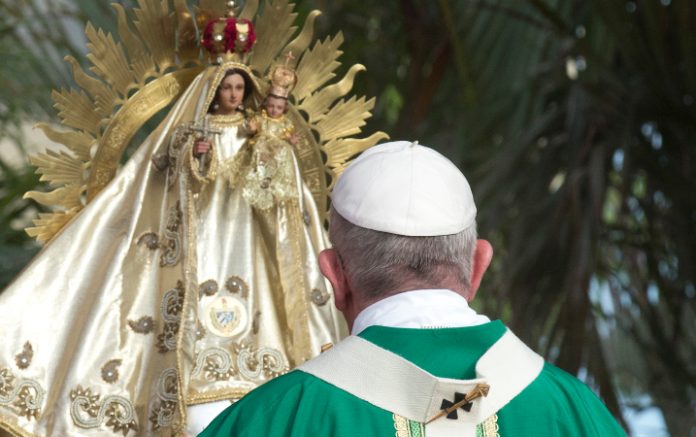 Admittedly this is an older an article but…..Pope Francis, the Jesuit, claims that mother Mary is the source of our hope, not Jesus Christ.

The blasphemy sustained in this statement should make every catholic repent and turn to the truth; The Bible, rather than the doctrine of lies, the Catholic Church.

According to catholic doctrine, Jesus Christ is third on the list of whom grants us hope.

Mary, the mother church, and then Jesus Christ.

“Thus, this is “our hope: we are not orphans, we have mothers”: first of all Mary. And then the Church, who is Mother “when she follows the same path of Jesus and Mary: the path of obedience, the path of suffering, and when her approach is to constantly learn the way of the Lord”.

Related: The Pope Just Called Jesus Christ A Failure And God Silenced him

The statements protruding out of the pope’s mouth should shake the catholic church and turn it towards that of life, which is obtained only through a relationship with Jesus Christ, and not through the pope; but rather a personal relationship with The Messiah.

Scripture clearly references Jesus Christ as the hope of our lives, not the church.

This statement is not the only time the pope has attacked Jesus Christ and nor will it be the last, however not too long ago the pope was also caught singing to lucifer rather than Jesus Christ.

Related: The Dirty Vatican, The Black Pope, and Their Heinous Crimes – The Masters of ‘The Situation’ Exposed

Is Pope Francis A Marxist in Disguise? The WSJ Claims The Pontiff is the Leader of The Globalists01:55

It’s all in the twist. The pope continually twists scriptures to meet his narrative rather than that of Christ. Which clearly should show that the pope has an agenda.

The position and title that Pope Francis has bestowed on Mary is, by his own words, equal or greater than that of the second part of the Trinity, Jesus Christ. And though he has yet to use the words, he has effectually already placed her authority firmly at the Godhead. Interesting thing, in the book of Revelation and speaking of the Roman Catholic Church, the apostle John writes this about that ‘holy mother church’:

“And the woman was arrayed in purple and scarlet colour, and decked with gold and precious stones and pearls, having a golden cup in her hand full of abominations and filthiness of her fornication: And upon her forehead was a name written, MYSTERY, BABYLON THE GREAT, THE MOTHER OF HARLOTS AND ABOMINATIONS OF THE EARTH. And I saw the woman drunken with the blood of the saints, and with the blood of the martyrs of Jesus: and when I saw her, I wondered with great admiration.”Revelation 17:4-6
And that’s what God thinks of the “holy Roman Mother Church”.

The following is the transcript from the pope’s Morning Meditation

Two women and mothers — Mary and the Church — bring Christ to a third woman, who resembles the first two but is “little”: our soul. The Pope reaffirmed, with these wholly female images, that without the motherhood of Mary and the Church we would not have Christ. “We are not orphans”, he recalled during the Mass celebrated in the chapel at Santa Marta.

Francis highlighted right away that “the Church, in the liturgy, leads us twice, for two days, one after the other, to Calvary”: in fact, “yesterday she made us contemplate the Cross of Jesus, and today his Mother at the Cross” (Jn 19:25-27). In particular, “yesterday she had us speak a word: glorious”. A word which refers to the “Cross of the Lord, because it brings life, it brings us glory”. But “today the strongest word of the liturgy is: Mother”. The Cross is glorious; the Mother humble, gentle”, the Mother whom the liturgy celebrates today as Our Lady of Sorrows.

Meditating on the Mother leads us directly to Jesus as son. Referring to the day’s Reading (Heb 5:7-9), the Pontiff pointed out that “in the passage from the Letter to the Hebrews, Paul emphasizes three strong words, speaking of Jesus the Son: he learned, he obeyed and he suffered”. Jesus, in essence “learned obedience and suffered”. Thus, “it is the opposite of what had befallen our father Adam, who had not learned what the Lord commanded, who had neither suffered nor obeyed”. Moreover, the Pope stated, “this passage from the Letter to the Hebrews reminds us of another passage from the Letter to the Philippians: “although he was in the form of God, he did not consider it an inalienable right; he renounced it, he humbled himself and took the form of a servant. This”, Pope Francis continued, “is the glory of the Cross of Jesus” who “came to the world to learn to be a man and, being man, to walk with men. He came to the world in obedience and he obeyed”. But “this obedience was learned through suffering”.

“Adam left Paradise with a promise”, he proceeded, “which went on throughout many centuries. Today, with this obedience, with this self-denial, this humbling of Jesus, that promise has become hope”. And “the People of God journey with confident hope”.

Mary too, “the Mother, the New Eve, as Paul himself called her, follows this path of her son: she learned, she suffered and she obeyed”. She “became ‘Mother’. We could say that she is the ‘anointed Mother’, the Pontiff affirmed, and the same is true for the Church.

Thus, this is “our hope: we are not orphans, we have mothers”: first of all Mary. And then the Church, who is Mother “when she follows the same path of Jesus and Mary: the path of obedience, the path of suffering, and when her approach is to constantly learn the way of the Lord”.

“These two women — Mary and the Church — carry on the hope which is Christ, they give us Christ, they generate Christ in us”, the Bishop of Rome emphasized. Thus “without Mary, Jesus Christ would not have been; without the Church, we cannot go forward”. They are “two women and two mothers”.

“Mary”, Francis explained, “remained steadfast at the Cross, she was bonded with the son because she had accepted him and she knew, more or less, that a sword awaited her: Simon had told her so”. Mary is “the steadfast Mother”, he continued, “who gives us certainty on this path of learning, of suffering and of obedience”. And Mother Church is also “steadfast when she adores Jesus Christ and she guides us, teaches us, shelters us, helps us on this path of obedience, of suffering, of learning this wisdom of God”.

Moreover, the Pontiff again affirmed, “our soul also takes part in this, when it opens itself to Mary and to the Church: according to monk and abbot, Isaac of Stella, our soul is also female and likewise resembles Mary and the Church”. Thus “today, looking at the Cross, this woman — steadfastly following her son, suffering in order to learn obedience — we see the Church and we see our Mother”. But “we also see our little soul”, which will never be lost if it too continues to be a woman close to those two great women who accompany us in life: Mary and the Church”.

Francis concluded by recalling that “as our fathers left Paradise with a promise, today we are able to go forward with hope: the hope we are given by Mary, steadfast at the Cross, and our hierarchical Holy Mother Church”.

One thought on “Pope Francis Demotes Jesus Christ, and Claims Mary as the Source of Our Hope”