Israel, a nation with a forceful religious lobby and a conservative prime minister, is poised to offer its female citizens some of the most liberal abortion coverage in the world.

The nation’s Health Ministry commission, led by Dr. Yonatan Halevy, last week announced its state-subsidized “health basket,” the package of medications and services that all Israeli citizens are entitled to under the nation’s health care system. It was approved by the cabinet on Sunday. The health basket is analyzed and amended on an annual basis, and among the many additional treatments to be offered to Israelis in 2014 are free-of-charge abortions for women ages 20-33.

Some 25,000 people, according to police estimates, marched Thursday evening at the fifteenth annual Jerusalem gay pride parade under heavy security after a deadly stabbing attack that took place at last year’s event.

Netanyahu paid tribute to Shira Banki, 16, who was murdered at the 2015 parade in the capital by an ultra-Orthodox extremist, calling her a “brave, talented and loved” child.

“Shira was murdered for supporting the simple idea that we are all equal. The parade today in Jerusalem is not a parade just for the LGBT community. It’s not a march just for one group…It’s a march for ‘us,’ for ‘togetherness.’ …We are all one family,” he said. “We march together in Shira’s memory, we will remember her with love and longing, we will not let others sow separation among us.”

Shortly after the original post Netanyahu also released a video in English with a number of changes to the Hebrew version, particularly stressing the way Arab countries treat the LGBT community.

“Weeks ago, dozens of members of the LGBT community were gunned down in Orlando by a terrorist with a fanatic ideology. We’ve all seen the horrific pictures of [the Islamic State] throwing gays off rooftops. And the Iranian regime hangs them from cranes in public squares. This is nothing short of insanity. Surrounding us are regimes who literally murder you for being gay,” he said in English.

The lack of rights in other countries was then compared to Israel where “the LGBT community marches with pride.” 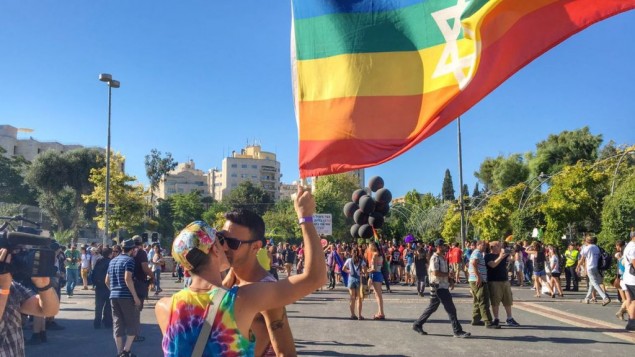 His English message echoed a video he made after last month’s deadly nightclub shooting in Orlando when he said that the attack was not an isolated incident, naming homophobic practices carried out by Islamic terrorist groups and countries across the Middle East.

“The murderer wasn’t alone. Regime and terrorist organizations around the world ruthlessly persecute the LGBT community,” he said in the June video. “In Syria ISIS throws gays off rooftops, in Iran the regime hangs gays from cranes. Too many people have remained silent in the face of this awful persecution.”

The attack at the Pulse gay club in Orlando killed 49 people and wounded 53 others. It was perpetrated by Omar Mateen, 29, who pledged allegiance to the Islamic State.