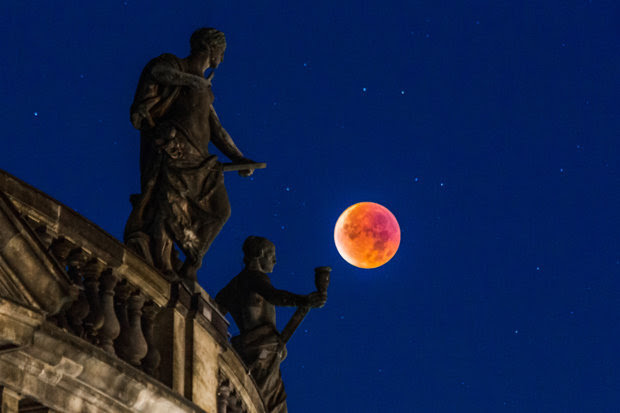 The total phase of the eclipse – called the totality – spans 1 hour 42 minutes and 57 seconds. That’s in contrast to the shortest total lunar eclipse of this century, which occurred on April 4, 2015 and lasted 4 minutes and 48 seconds. And it’s in contrast to 2018’s other total lunar eclipse – on January 31, 2018 – whose totality lasted 1 hour and 16 minutes.

A partial eclipse precedes and follows the total phase of the eclipse, each time lasting 1 hour and 6 minutes. So, from start to finish – on July 27-28, 2018 – the moon spends nearly 4 hours (3 hours and 55 minutes) crossing within Earth’s dark umbral shadow. Wow! That’s a long eclipse.

Adding to the excitement on eclipse night … this eclipse will happen on the same night that Earth is passing between the sun and Mars, placing Mars at opposition in our sky. In one of the sky’s wonderful coincidences, the Mars opposition happens on July 27, too. It’s not just any Mars opposition, but the best Mars opposition since 2003. Mars is very bright and red throughout July and August, 2018. But eclipse night will be a very special night. On July 27, the sun, Earth and moon are aligned – placing the moon opposite the sun in our sky – producing an eclipse as Earth’s shadow falls on the moon’s face. On the same night, the sun, Earth and Mars are also aligned, bringing Mars also opposite the sun in our sky, just like the full moon. That’s fun to think about, but there’s more for those who plan to observe the eclipse.

Picture it, if you will. During the long total phase of the July 27, 2018 lunar eclipse – the totality – the moon will turn red from sunlight filtering through Earth’s atmosphere onto the moon’s surface. And Mars will be near the moon, exceptionally bright – brighter than since 2003 – and red in color also.

Red moon, red Mars … does it get any better? Expect some great photos!

The eclipsed moon on July 27 will be close to the planet Mars, which – in July and August 2018 – is at the peak of its very special brightness as seen from Earth. Read more.

Clouded out on eclipse night, or on the wrong side of Earth? Never fear.

The Virtual Telescope Project in Rome is offering a live viewing. Click here for details. It starts at 18:30 UTC on July 27. That’s 2:30 p.m. EDT on July 27; translate UTC to your time.

Here’s another option for following the eclipse, live, online. This one offers a commentary in Spanish. The live broadcast of sky-live.tv starts at 18:20 UTC.  Click here for information.

Now for the bad news for North America. This lunar eclipse is primarily visible from the world’s Eastern Hemisphere (Europe, Africa, Asia, Australia and New Zealand).

The next total lunar eclipse on January 21, 2019, won’t be as long either (1 hour and 2 minutes) because it’ll pass to the north of the shadow’s center.

In 2018, the July full moon and July lunar apogee – the moon’s most distant point from Earth in its monthly orbit – both fall on the same date: July 27, 2018. Therefore, the July 2018 full moon showcases the most distant and smallest full moon of the year. Sometimes called an apogean full moon (or micro-moon or mini-moon), this smaller and slower-moving full moon takes more time to cross the Earth’s shadow than does a full moon that’s closer to Earth and moving faster in orbit. That’s why a full moon at or near lunar apogee adds to the duration of a total lunar eclipse. 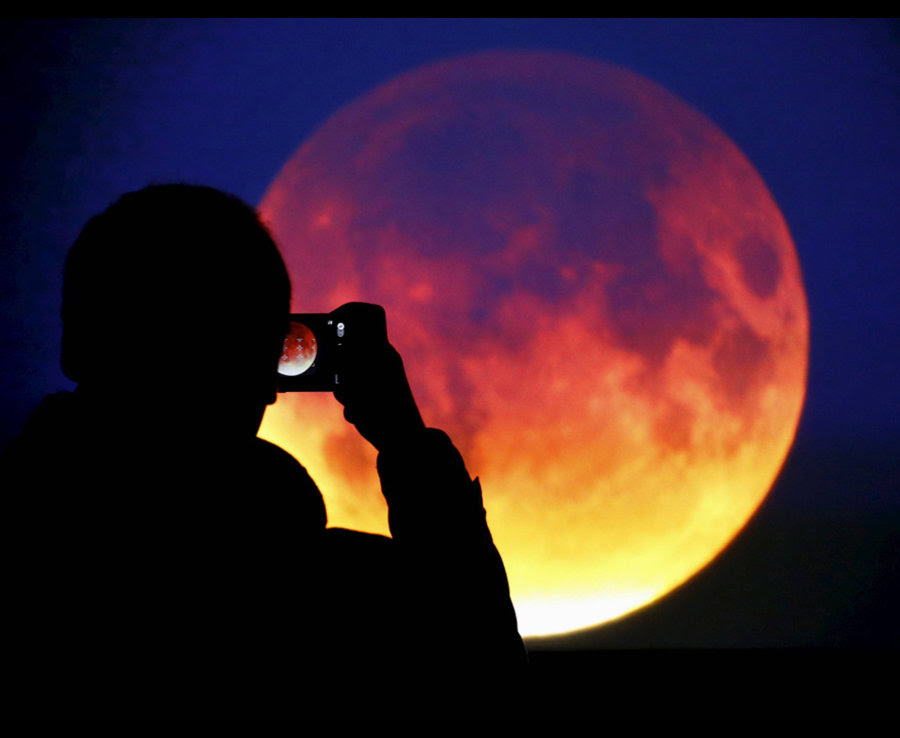 The full moon will plunge deeply into the Earth’s shadow on the night of July 27-28, 2018. Depending on atmospheric conditions, this could be an especially dark total eclipse, though you won’t know for sure unless you look!

BLOOD MOON: Does the Bible predict the end of the world this week?
The theory has been picked up by similar thinkers and the prophecy resurfaces weeks before every blood moon.

The “blood moon” theory is interpreted from the Book of Joel, which says: “The sun will turn into darkness, and the moon into blood, before the great and terrible day of the Lord comes.”

A similar passage in the Book of Revelations reads: “And I beheld when he had opened the sixth seal, and, lo, there was a great earthquake; and the sun became black as sackcloth of hair, and the moon became as blood.”

The combination of a Supermoon and total lunar eclipse creating a blood moon last occurred in 1982 and will not happen again until 2033.

But note there are no more Supermoons for centuries after that!!!

Bottom line: July 27, 2018, brings the longest total eclipse of the moon of the 21st century. It happens when the most distant and smallest full moon of the year passes through the center of the Earth’s shadow, which is at its widest in July.

And it happens on a night when the moon is near Mars, which also comes to opposition on July 27. What a night!