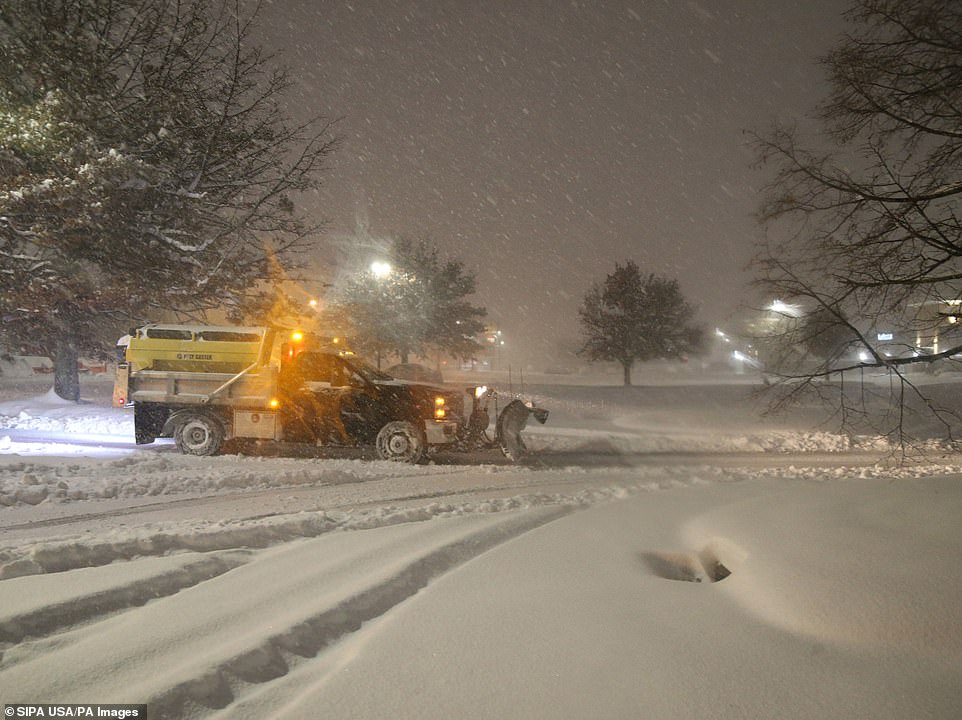 By JESSA SCHROEDER and KEITH GRIFFITH FOR DAILYMAIL.COM and ASSOCIATED PRESS

The first wintry blast of the season brought several inches of snow, contributing to eight deaths across the country and slowing New York City’s Thursday evening commute to a crawl.

From St. Louis to the South and into the Northeast, snow, freezing rain, and in some parts, sleet, made driving tricky and closed schools Thursday.

And the storm will continue to cause travel disruptions and power outages into Friday with the potential for up to 12 inches inches of snow from western Maryland to northwestern Maine, AccuWeather reports.

‘In some areas, it is possible that one to two inches of sleet falls on top of the snow,’ AccuWeather senior meteorologist Alex Sosnowski said.

Commuters were also advised to avoid the Port Authority Bus Terminal – which is also used by some to travel to New Jersey – due to extreme overcrowding.

By 5:30 p.m., the terminal had become an immovable block of wall-to-wall commuters all gazing up at the schedule board. Lines of people waited to get into the terminal as officials urged them to take trains or ferries.

Shocking photos from inside the station show hundreds of commuters sporting their winter jackets and hats as they are crammed in. The terminal was partially closed down and travelers were banned from entering the second and third level.

As a result of the storm, the city’s students were left stranded on school buses late into Thursday night. Special-needs student George Jordan spent seven hours on a bus home to the Bronx, the New York Post reports.

The poor weather made it difficult for buses to reach the terminal, officials said. And a multi-vehicle accident on the George Washington Bridge and the closure of the Bayonne Bridge connecting Staten Island to New Jersey added to the traffic nightmare.

A mayoral spokesman said the early storm meant that Metropolitan Transportation Authority didn’t have snow chains on its buses. He said many of them had to pull over, ‘further clogging streets.’

Scroll down for videos 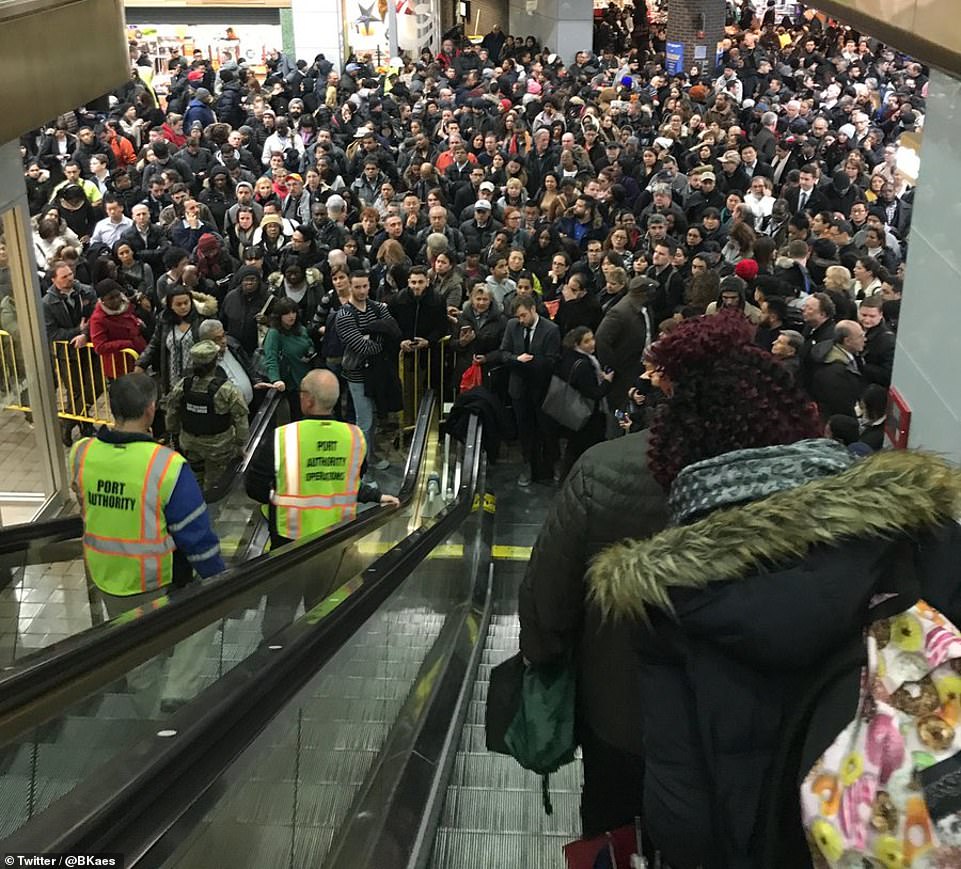 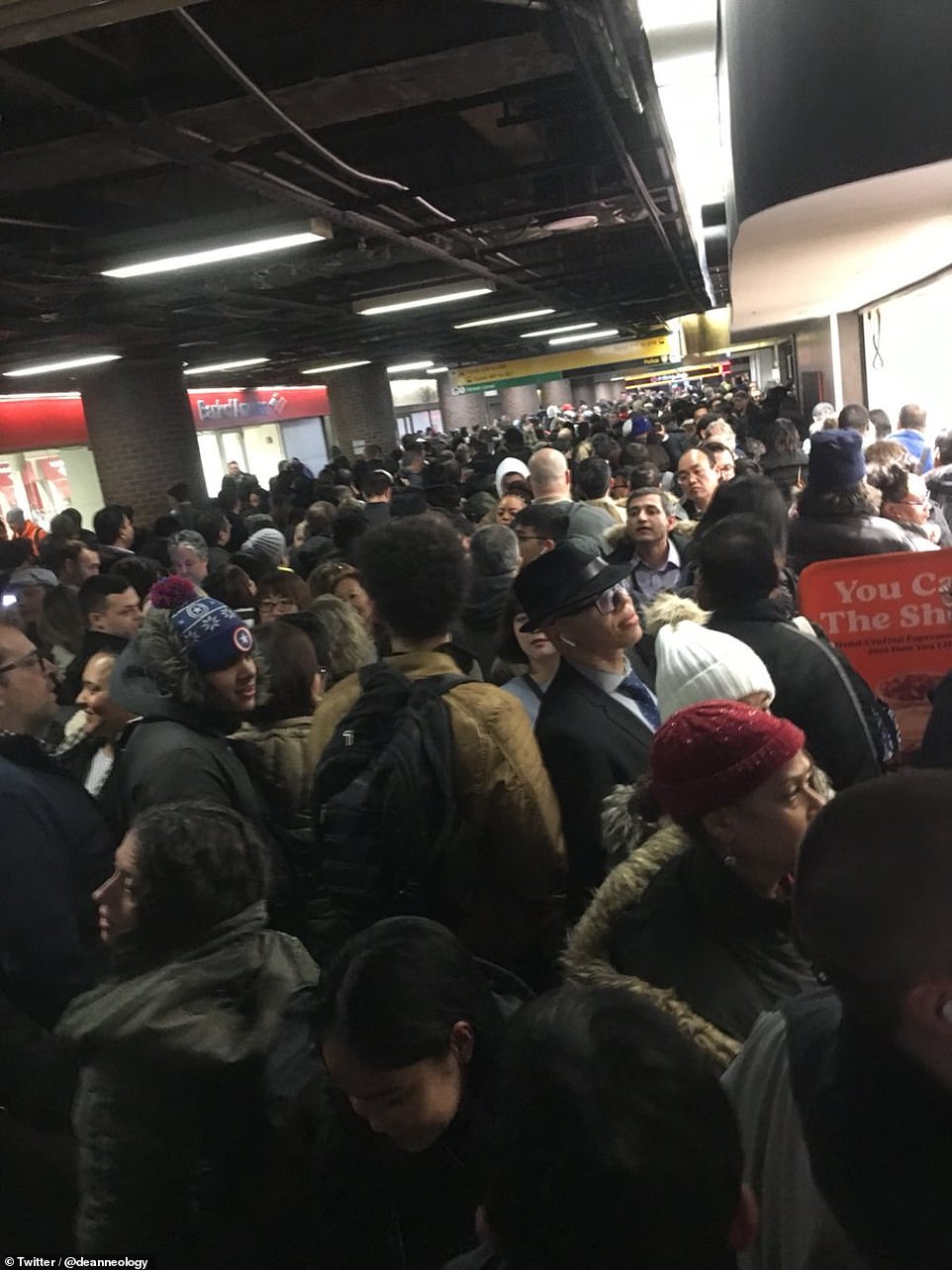 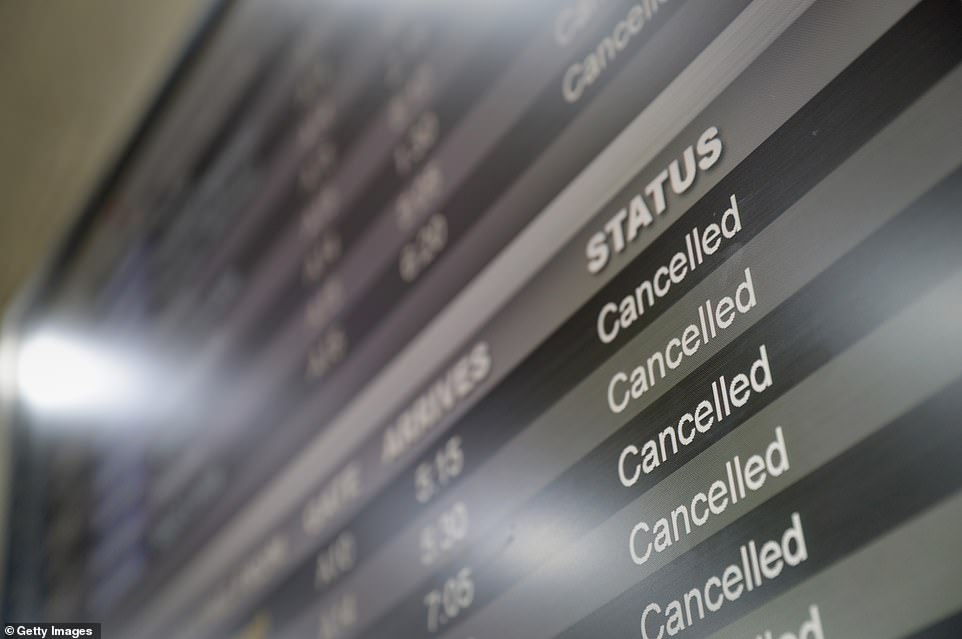 A board shows cancelled flights due to a snow storm at the Newark Liberty International Airport on November 15, 2018 in Newark, New Jersey. The early season storm caused flight cancellations in much of the northeast 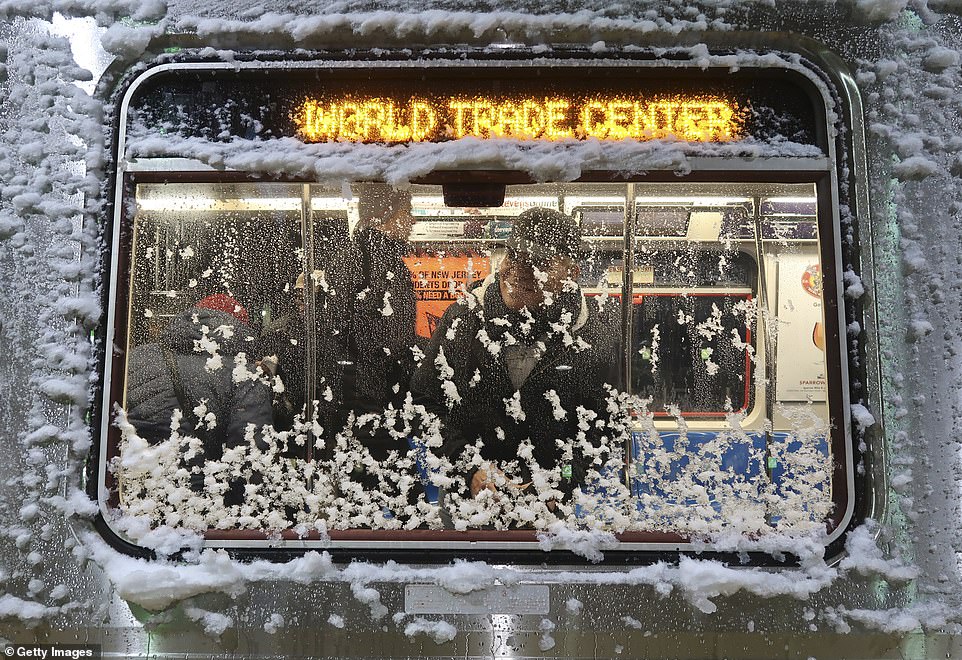 A World Trade Center bound PATH train is covered in snow as it sits in Newark Penn Station on November 15, 2018 in Newark, New Jersey. 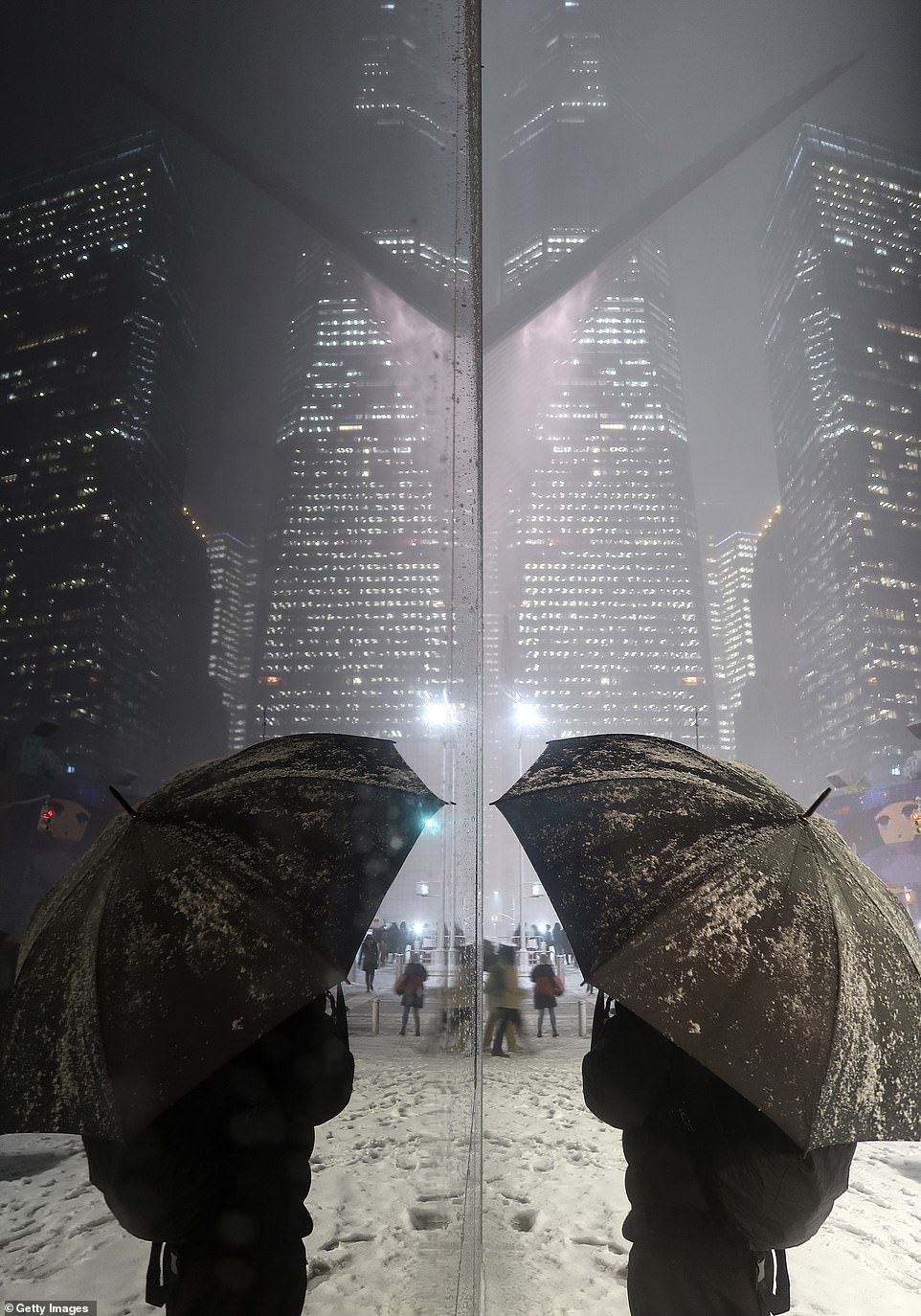 A person stands in the snow outside the Oculus Transit Hub on November 15, 2018 in New York City. New York experienced its first snowfall of the season on Thursday with expectations of over an inch of snow to fall on the area 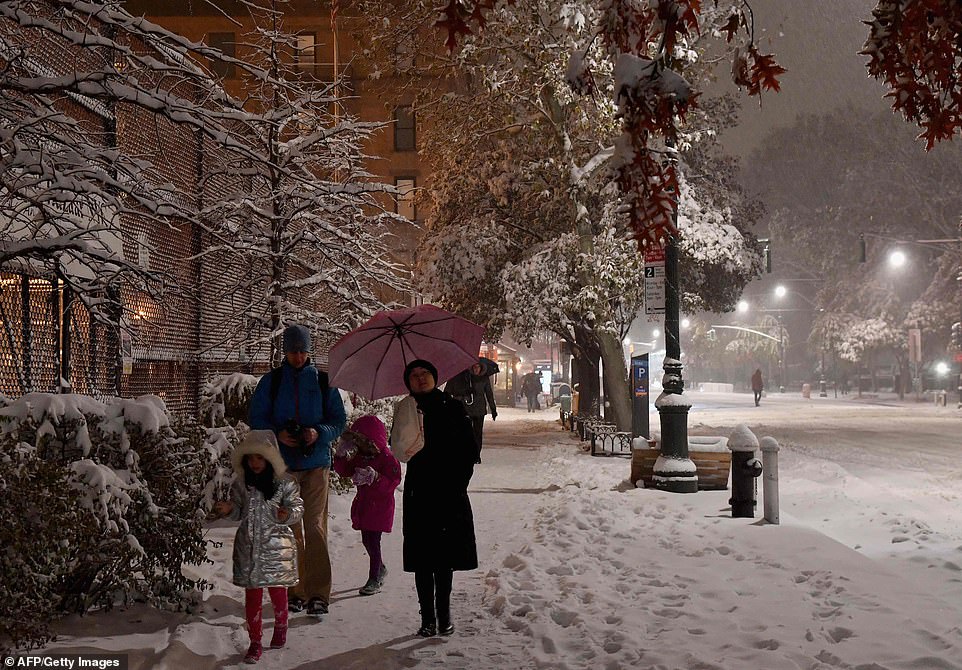 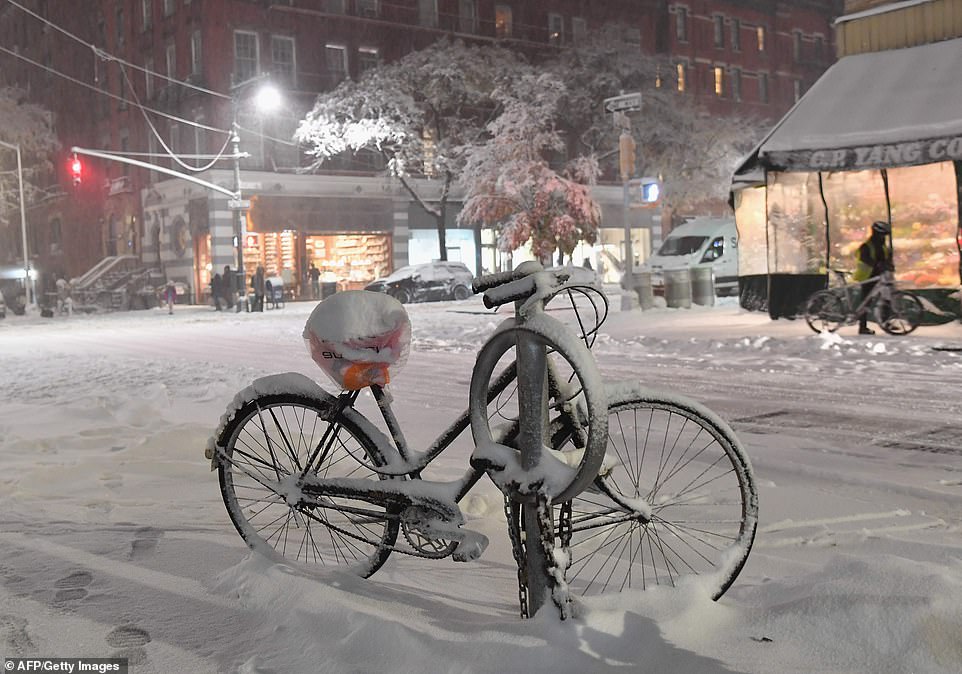 A bicycle covered in snow is seen in Manhattan on November 15, 2018 in New York 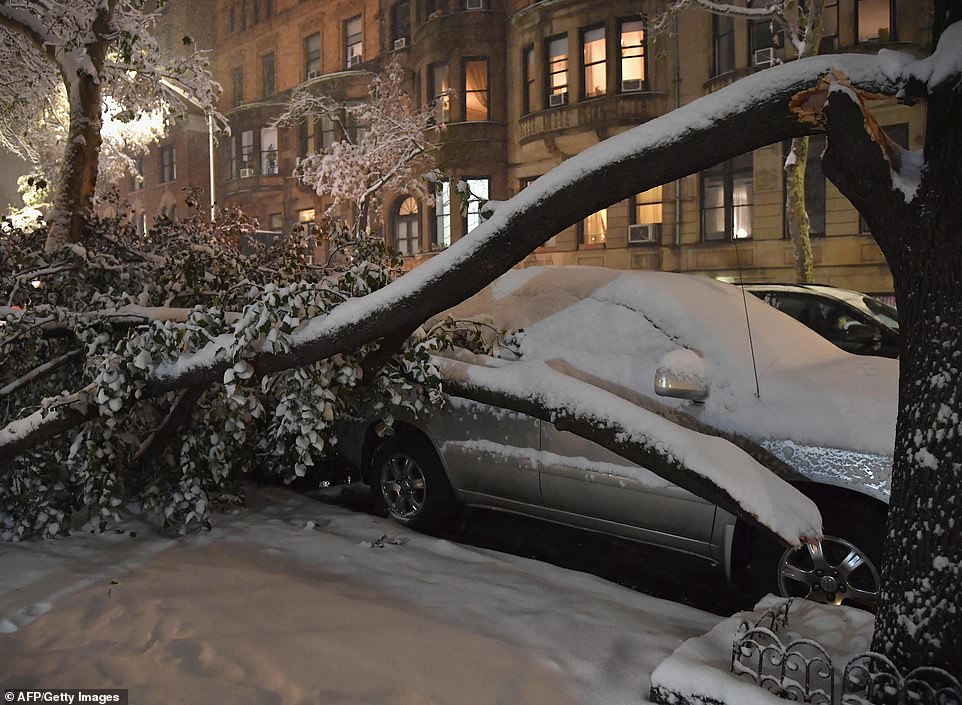 A tree collapsed on top of a parked car in Manhattan on November 15, 2018 in New York 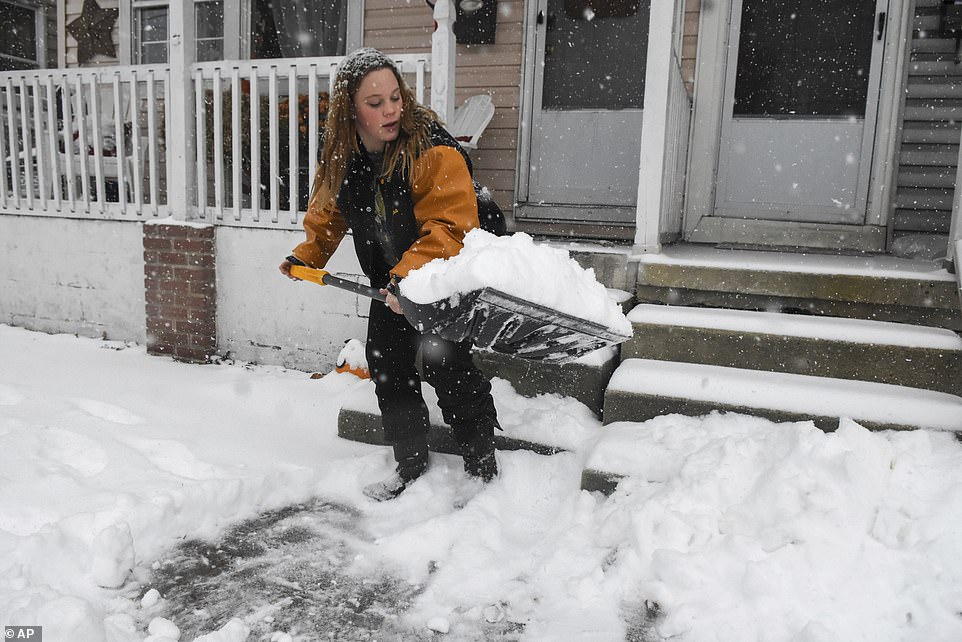 Ileina Weber shovels snow in front of her house in Schuylkill Haven, Pennsylvania on Thursday