By JENNIFER SMITH FOR DAILYMAIL.COM and REUTERS

California is bracing for what meteorologists are calling a ‘parade’ of wet weather storms that could cause dangerous mudslides in the areas which were torched by the wildfires.

On Wednesday afternoon, the first of the storms will rush across the state, bringing up to four inches of rain in Paradise, the town which was entirely razed by the Camp fire earlier this month.

It will finally bring fire season to an end and will play a part in extinguishing the last of the fire which, as of Tuesday night, was 75 per cent contained.

It will also pose fresh danger to the area by triggering mudslides that could be like a ‘flood on steroids’ because there is so much debris in the area.

The number of people confirmed dead rose in Paradise to 81 on Tuesday as emergency teams recovered two more bodies.

It brings the death toll across the entire state to 84 people. The number of people missing also rose again on Tuesday night to 899 remain missing as detectives in Paradise were able to work through a backlog of voicemails from the worried relatives of people who remain unaccounted for.

The rain will slow down search efforts in Paradise and will also wreak havoc on evacuees who are living in shelters and in their cars. 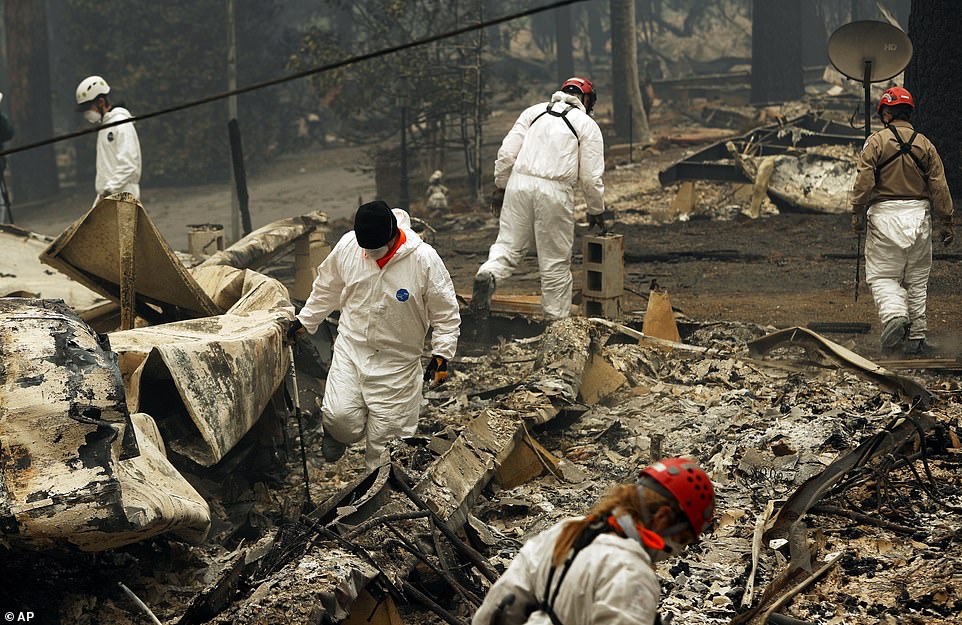 Rescue teams work through the debris in Paradise looking for victims of the wildfire last week. Two more bodies were found on Tuesday, bringing the total wildfires death toll across California to 84

The fire also creates a hard, waxy surface that tends to repel rather than absorb water.

It’s like a flood on steroids… they move faster than you can run
Jason Kean, a research hydrologist for the U.S. Geological Survey, describing the likely debris slides

The result can be heavy runoff of rainwater mixed with mud, boulders, trees and other debris that flows downhill with tremendous force, said Jason Kean, a research hydrologist for the U.S. Geological Survey.

‘Those debris flows have the consistency of wet concrete and move faster than you can run,’ he said.

‘It’s like a flood on steroids … and a big one can take out two-story buildings.’

Butte County Sheriff Kery Honea, who said he is ‘overwhelmed’ with the situation on Monday, said he knew the list – which is ‘incomplete and raw’ – was not perfect but that he wanted to get information out to the public. 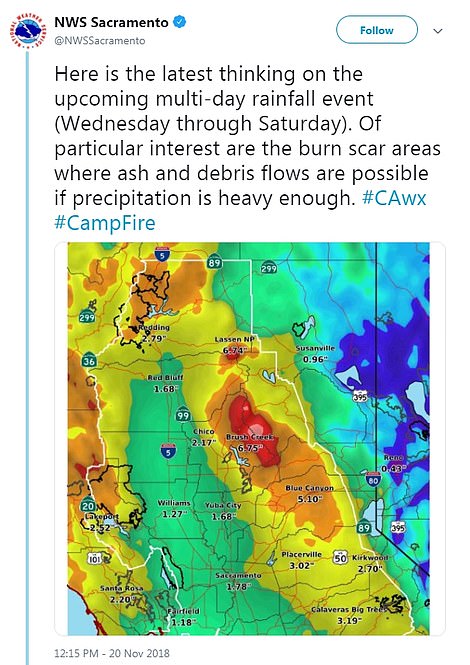 ‘We put the list out. It will fluctuate. It will go up. It will go down because this is in a state of flux.

‘My view on this has been that I would prefer to get the information out and start working to find who is unaccounted for and who is not. I would put progress over perfection,’ he said.

The Woolsey fire is now 96 percent contained and firefighters expect it to be completely extinguished by November 22.

The Camp fire is 60 percent contained. On Monday, experts said they predicted it will burn for another 10 days before being entirely put out.

‘It is overwhelming, I don’t have any word to describe it.

‘This is unprecedented. No one has had to deal with this magnitude that caused so much destruction and regrettably so much death,’ Butte County Sheriff Butte  Kory Honea said on Monday.

The rain forecast for Tuesday and Wednesday will bring relief to the areas with the worst air pollution and where the fires are still burning but they will pose other problems.

As much as four inches of rain is forecast in Chico, were Paradise evacuees are sheltering, and in the town itself between Wednesday and Sunday.

‘Once you get the first real rain, the fire season comes to an end. The fire threat falls significantly. 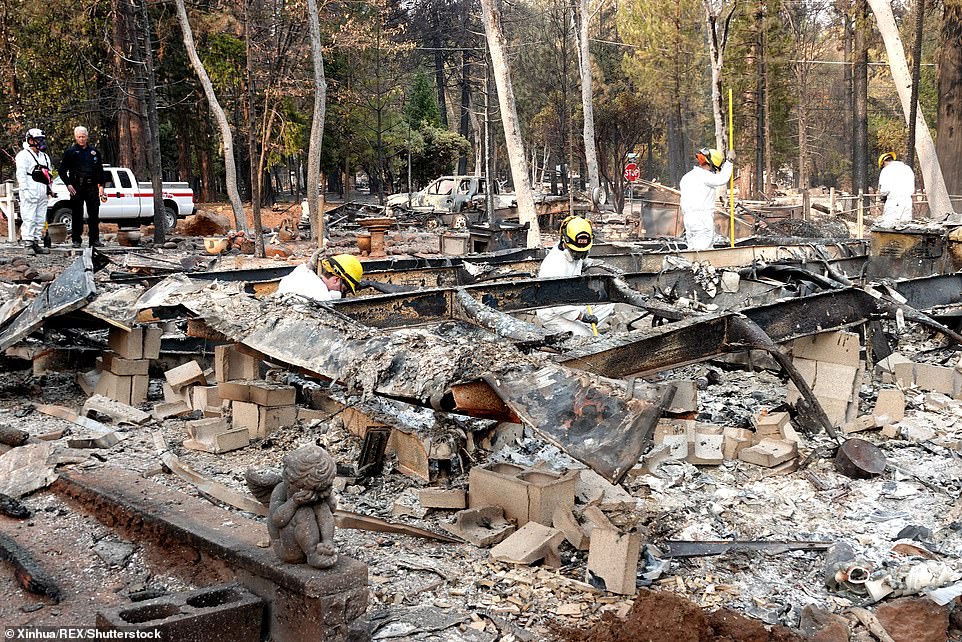 Rescue teams search a torched site in Paradise, California, on Monday in a race against the weather