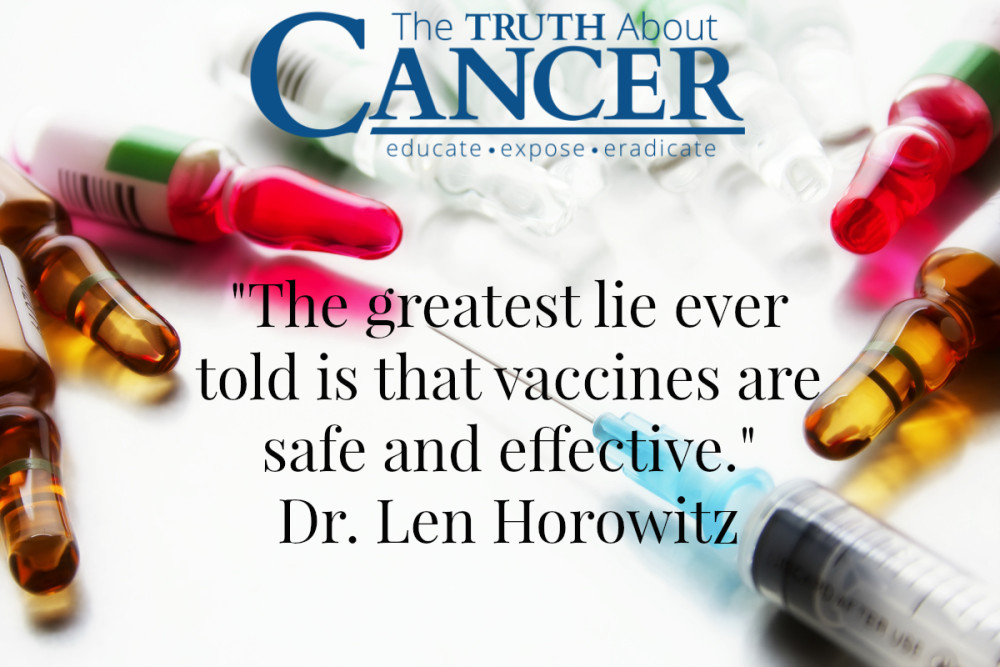 (NaturalHealth365) Recent data from the Health Resources & Services Administration reveals some alarming information about vaccine side effects and the legal outcome of a vaccine injury.

Payouts from a vaccine injury compensation fund have now exceeded $4 billion, and this reflects the government’s own assessment that just one percent of all vaccine injuries are reported.

As we would expect: the pharmaceutical industry, the U.S. Centers for Disease Control and Prevention (CDC) plus many other ‘health’ organizations continue to insist that vaccines are ‘safe and effective’ – despite the huge payouts issued by the National Vaccine Injury Compensation Program (NVICP).

There has never been a wider level of brainwashing throughout a society.  Too many uninformed citizens are being kept in the dark about the true risks associated with these vaccines.

The most disturbing reality linked to vaccine injury payouts

The National Childhood Vaccine Injury Act (NCVIA) was launched by President Reagan in 1986 as an ‘alternative remedy’ to judicial action for vaccine injuries. A key component is the National Vaccine Injury Compensation Program (NVICP) with its own “vaccine court.”

Within this system, consumers are required to meet an extremely high burden of proof to win their cases. Over its 30-year history, consumers have filed more than 20,000 petitions.

The result?  Less than one-third of these victims receive compensation, and since only about one percent of vaccine injury cases are reported, only a fraction of those affected by vaccine side effects ever receive monetary compensation for their pain.

While some victims do receive a legal victory, overall it seems like this program cares more about protecting the vaccine manufacturer.  If big pharma is not held accountable for its actions, why should they focus on making vaccines safer?

Despite horrific side effects: Vaccines get promoted, more than ever!

Meanwhile, the CDC childhood vaccine schedule guarantees a large and lucrative market for the pharmaceutical companies.  As you may know, there’s been a push – in recent years – to vaccinate teenagers with the HPV shot.

In addition, the highly ineffective flu vaccine is heavily marketed to people of all ages.

The source of many vaccine side effects has been linked to the toxic metals – which are included as so-called ‘necessary’ ingredients.  Many vaccines on the market today contain: aluminum, mercury and other ingredients that essentially function as neurotoxins – suppressing the immune system; leading to nervous system issues and cognitive problems.

Parents beware: children under the age of 3, in particular, receive these unsafe ingredients in amounts that far exceed acceptable levels.

The reason why vaccines cause problems like, autism and autoimmune disorders

According to ‘conventional wisdom,’ adults should not receive more than 25 micrograms (mcg) of aluminum at one time; infants or children – no more than 10 micrograms.  Yet, while adhering to a typical vaccine schedule, small children will be exposed to at least 250 mcg on their first day of life! (plus, much more before the age of 3)

In addition to neurological problems, autoimmune disorders and autism, many vaccine side effects include: chronic aches and pain, paralysis and even sudden premature death.  Regulatory agencies and the drug companies themselves need to start focusing on better ways to protect our society from disease.

Injecting neurotoxins into the human body is NOT ‘safe’ or ‘effective.’  It’s just wrong.

We, as concerned citizens, must educate ourselves and (always) make informed decisions about our healthcare. 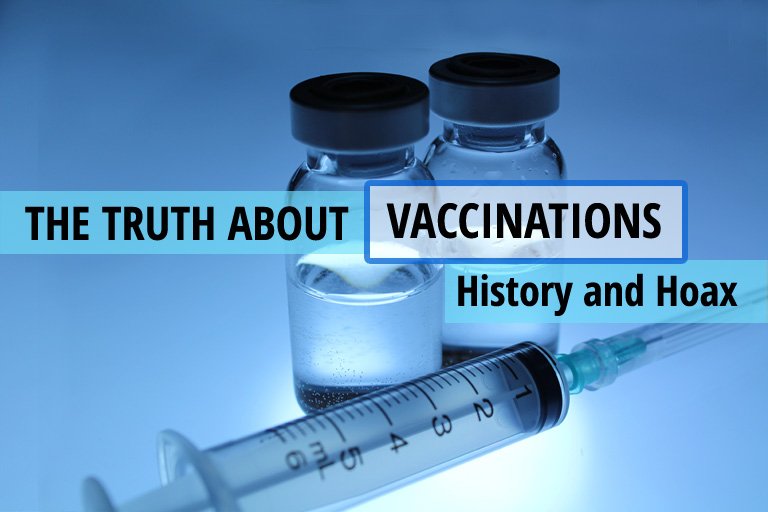 Many modern health “authorities” credit vaccines for the decline in disease and assure us that vaccines are safe and effective. But is that true? Take a close look at the following graphs and you will see the reduction in deaths from pertussis (whooping cough), diphtheria, polio and measles. 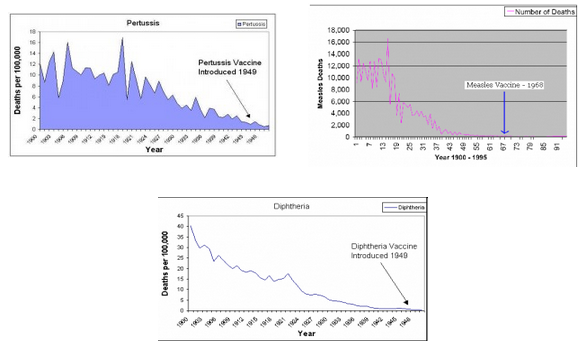 Notice that these diseases were virtually wiped out before the introduction of their respective vaccines! Rather the decrease in these childhood maladies weren’t due to vaccinations (as you may have been told), but were mainly the result of improved public health and hygiene (including sanitation and cleaner drinking water) during that time.

An interesting side note concerning polio involves some “shady” behavior by the Centers for Disease Control (CDC); in 1958, after the introduction of the live polio vaccine, they changed the definition of “polio.” Cases of inflammation of the membrane that protects the brain and spinal neuron cells, causing muscular weakness and pain (but not paralysis) were no longer classified as “polio”;  they were now to be referred to as aseptic meningitis, even if the polio virus was present.

Reported cases of aseptic meningitis went from near zero to thousands, and polio cases dropped the same amount. Then, later in 1958, the CDC changed the definition of “polio” again!! All cases with classic polio paralytic symptoms were to be called acute flaccid paralysis. In 1960, the CDC triumphantly declared large parts of the world as “polio free,” while the newly created acute flaccid paralysis “mysteriously” became quite common.

In 1977, Jonas Salk, the creator of the polio vaccine, testified before a Senate subcommittee that “all polio outbreaks since 1961 were caused by the oral polio vaccine.” In 1985, the CDC reported that 87% of the cases of polio in the USA between 1973 and 1983 were caused by the vaccine and most of the reported cases occurred in fully immunized individuals.

Despite indisputable proof that vaccines do nothing to prevent disease, brainwashed pediatricians insist that it is unwise and a health risk to have unvaccinated children. Sadly, nothing could be further from the truth. The fact is that vaccines have been a hoax from their inception. Edward Jenner, known as the “father of vaccines,” was not a scientist but a huckster and Louis Pasteur, the father of the germ theory of disease, was nothing more than a charlatan out to make a buck. I have heard these two men referred to as the “Barnum & Bailey” of medicine.

Contrary to popular belief, the scientific community is not 100% behind mandated vaccination laws in the US. Thus you have a consensus of thought rather than solid scientific evidence supporting vaccine mandates. . . which, for lack of a better term, translates into “junk science.” Real scientists and real science tell us that artificial immunity (aka vaccination) is “an emperor with no clothes on.”

As far as real science is concerned, there is no evidence that you should vaccinate yourself or your children, ever, for any reason. I am well aware that vaccines are considered “sacred” to most physicians. As a matter of fact, questioning them is tantamount to blasphemy. I can assure you that I would not challenge the efficacy and safety of something as “holy” as vaccines unless I were certain, beyond a shadow of a doubt, that I am accurate when I state that vaccines are not safe (unless you change the definition of “safe” to include death, numerous diseases and brain damage).

The greatest lie ever told is that vaccines are safe and effective.
-Dr. Len Horowitz

But that’s not surprising, considering the toxic ingredients in most vaccines. Oftentimes described as “toxic cocktails,” many vaccines contain XE “toxic cocktails” which are live and dead animal viruses that have been cultured in monkey kidney tissue, cow tissue, goat tissue, pig tissue, and even aborted human fetuses. Vaccines contain any combination of the following: thimerosal (a mercury derivative), aluminum, formaldehyde (carcinogenic embalming fluid), phenol, ethylene glycol (antifreeze), live viruses, bacteria, and acetone, among other things.

What if I were to take some mercury, formaldehyde, aluminum, antifreeze, and live viruses cultured in dead animal tissue, then mix them together with some peanut butter and spread it on a piece of bread for my children to eat for a snack? Would you think I was a good parent? What if I were to tell you, “This will keep them from getting sick”? Would you question my sanity? The odds are that I would be arrested for child abuse. However, when doctors inject our kids with the same ingredients (minus the bread and peanut butter) and tell us, “This will keep them from getting sick,” most of us don’t even give it a second thought.

What if you call your family physician and tell him you are going to inject your baby with mercury, aluminum, and formaldehyde and that you are wondering what the “safe dosage” was for these ingredients? Well, right after he calls CPS, he will probably call the police! You see, there is no safe dosage because these are all lethal substances that are also potentially carcinogenic. But mercury derivatives, aluminum, and formaldehyde are ingredients in most vaccinations. How is it possible that they are safe?

The answer depends upon who is injecting them. If you or I inject our child with mercury or formaldehyde, we are going to jail. But if a pharmaceutical company and a doctor inject the same toxic poisons, then they are perfectly safe. What’s wrong with this picture? Unfortunately, most Americans follow the masses, believe what we’re told, don’t ask questions, and place blind faith in our doctors.

In the 1970s, only 1 child in 10,000 was autistic. In the 1990s, there was a “stepped-up vaccine schedule” where the amount of thimerosal was drastically increased in most childhood vaccines, including the MMR and DPT. Now, in the year 2009, autism affects 1 in 67 children! It is a well-established fact that exposure to mercury can cause immune, sensory, neurological, motor, and behavioral dysfunctions – all similar to traits defining, or associated with, autism. My cousin’s second boy is autistic and he first showed autistic behavior less than 24 hours after receiving the MMR vaccine. The evidence linking vaccines to autism is overwhelming.

Interestingly, in March of 2008, the U.S. government conceded that childhood vaccines were responsible for the autism in 9-year-old Hannah Poling. This unprecedented concession was in response to one of three test cases that allege thimerosal caused autism in children.

I am no longer “trying to dig up evidence to prove” vaccines cause autism. There is already abundant evidence…. This debate is not scientific but political.
—Dr. David Ayoub, M.D.

I know we were all taught to blindly trust our doctors, but the fact is that they no longer deserve that trust. Physicians take an oath to “First, do no harm,” but today, what gets injected into your child is being decided not by physicians but by multinational pharmaceutical companies which have a financial incentive to sell as many vaccines as possible. Only by keeping people in the dark can they continue their absurd profiteering from the vaccine industry. We assume that because vaccines are mandated by US law that the government is verifying their safety and effectiveness. Nothing could be further from the truth.

Every day, millions of children are lined up and injected with toxic, putrid substances called vaccines. Before they begin first grade, children can get as many as 36 vaccines! There are about 200 more vaccines in the pipeline. Scenarios for the future even include consuming vaccines in nose sprays, ointments and fruits and vegetables. This “Vaccine Obsession” has gone beyond what anyone can possibly defend on scientific grounds. Pumping more vaccines into our precious children borders on the criminal.

With every child on the planet a potential “required recipient” of multiple vaccines, and with every healthcare system and government a potential buyer, it is little wonder that billions of dollars are spent nurturing the vaccine industry. Without public outcry, we will see more and more new vaccines required of us and our children. And while profits are readily calculable, the real human costs are being ignored. According to Dr. James R. Shannon, former director of the National Institute of Health reported in December, 2003 that “the only safe vaccine is one that is never used.”

Keep this in mind when you’re attempting to make up your mind “to jab or not to jab.”

Concerning the preceding article, I must give you the following FDA mandated warning and disclaimer:

I am not a doctor. The article above is for educational purposes only.