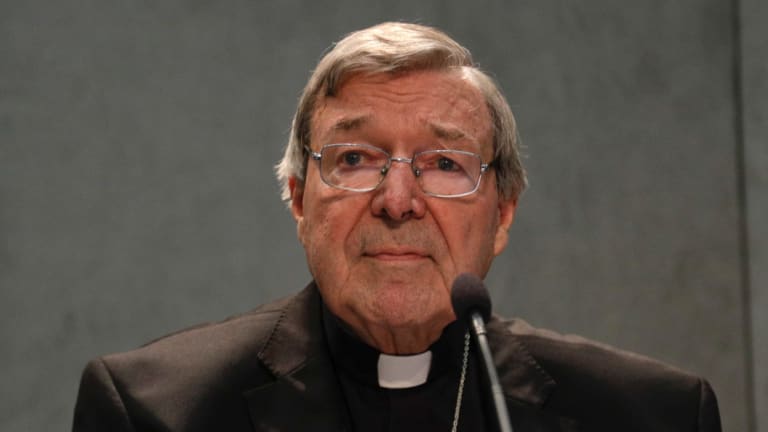 An Australian court just found Cardinal George Pell, at one time the #3 official in the Vatican and a former Archbishop of Sydney, guilty of sexual abuse of two choirboys in the 1990s.

But news outlets in that country couldn’t report the conviction because of what is known as a “suppression order,” which bans any mention of Pell’s name or the details of the case.

IF A JUDGE IN A DIFFERENT COUNTRY issues an order preventing the media from discussing a trial, do media outlets in the US have a duty to abide by that order? Or is there a larger duty to keep the public informed? This isn’t a hypothetical example

The Melbourne Herald Sun ran a front page with the word “Censored!” in large type on the day after the conviction was handed down.

In an unusual step, the judge’s order also (theoretically at least) applies to non-Australian news outlets. A transcript of a discussion between the judge and another court official even shows the judge mentioning the possibility of extradition for anyone who breaches the order. As a result, international media organizations including Reuters, Associated Press, and The New York Times have avoided writing about the conviction, out of concern that their reporters in Australia could be charged with contempt of court (see update below). The Washington Post, however, ran both a news story on the conviction and a column by media writer Margaret Sullivan, one of the only mainstream publications to do so (it should be noted that the Daily Beast was the first to report the news, and the Post piece was followed by stories at NPR, Slate, The Daily Mail and several Catholic news sites).

ICYMI: A reporter asked for 20 years of lottery winner data. After analyzing the records, he noticed something unusual.

After the Post stories were published, executive editor Marty Baron released a statement which read, in part:

This story is a matter of major news significance involving an individual of global prominence. A fundamental principle of The Washington Post is to report the news truthfully, which we did. While we always consider guidelines given by courts and governments, we must ultimately use our judgment and exercise our right to publish such consequential news. Freedom of the press in the world will cease to exist if a judge in one country is allowed to bar publication of information anywhere in the world.

After her column was published, Sullivan got some blowback from Kate Doak, a journalist in Australia who said she has been working on the Pell case and similar Catholic Church-related sexual abuse cases for a number of years. Doak suggested that it was irresponsible of the Post to break the judge’s gag order, because doing so could jeopardize future cases against Pell that are still in the works. The judge’s order was designed (as most similar gag orders in Australia, Britain and Canada are) to limit the amount of information potential jurors might have about a case, so as to avoid poisoning the jury, resulting in a potential mistrial?

@Sulliview I’m going to be purposefully blunt. Are you and your colleagues at the @washingtonpost purposefully trying to cause a mistrial with the stunt that you’ve pulled on the Melbourne case? There’s still more cases going to trial & this is putting a LOT of them at risk.

In comments to CJR about the case, Sullivan—who stressed that she was speaking only for herself—said: “As journalists our job is to tell the truth, not to keep newsworthy events hidden to achieve a particular outcome that may or may not come to pass.” While Sullivan said there are clearly times when a media outlet might refrain from publishing certain material because it could put lives at risk (in reporting on hostage negotiations, for example), “the conviction of a senior Vatican official for sex abuse of children falls far outside those limits.” In addition, the Post columnist said that it’s absurd to think word of the trial and conviction wouldn’t get out via social media regardless of a gag order, and so “better that it be reported accurately and professionally” than rely on word-of-mouth innuendo or hearsay.

In an email to CJR, Doak said that while she believes in the public’s right to know about an important case, she doesn’t think that goal justifies potentially jeopardizing future cases against the Cardinal by breaching the suppression order. “As an investigative journalist I’m deeply aware that I have a responsibility to my audience to be as accurate, informative and impartial as humanly possible,” she said, but “when the breach of a media suppression order may result in a mistrial occurring, we must take into consideration the additional health implications that our actions can inflict on already traumatised individuals and act accordingly.”

Doak isn’t the only one who thinks the Post might have made a mistake in publishing news of the conviction. Raju Narisetti, former CEO of Gizmodo Media Group and now a journalism professor at Columbia University and director of the Knight-Bagehot Fellowships program, said on Twitter that if a court in a democratic country comes to a decision about something like a gag order in a crucial sex abuse case, even international media outlets should abide by that decision. “I don’t think news companies should pick and choose which law of the land they will adhere to, especially in democratic societies with established laws,” he said. “To me the law of the land argument resonates in a more compelling way than the argument about holding back for future, broader justice.”

The question of whether US media should abide by a court decision in another country is a complex one. But from a practical point of view, gag orders like the one the Australian court issued—not to mention the “super injunctions” used by courts in the UK, where even mentioning the existence of a gag order is forbidden—seem doomed even if newspapers like the Post agree to them, since the news can be distributed instantly via Twitter or Facebook or WhatsApp. A transcript from the Australian case shows the judge is concerned that Wikipedia reported the conviction, and is also concerned about Twitter.

In a similar case in New Zealand, the government criticized Google for not abiding by a gag order on a case involving the killing of a British backpacker. The search giant used the accused killer’s name in a “trending topics” email that was sent to some users, and the New Zealand justice minister demanded that Google change its algorithm so that information in such cases wouldn’t be visible inside New Zealand.

Apart from the legal issues, these kinds of gag orders raise a larger question: Does it make any sense to try to keep people in the dark about a legal ruling simply because they might one day be asked to serve as a juror in a related case? Can’t we assume that reasonable human beings would be able to put aside news reports in order to come to a conclusion about someone’s guilt or innocence? And if we can’t, then why don’t all court cases include gag orders?

The New York Times sent CJR a statement after this post was published pointing out that a story about the Cardinal’s conviction appeared in US print editions of the newspaper on Friday. The statement quoted David McCraw, vice president and deputy general counsel for the Times:

“The Times is covering the Pell story in its U.S. print editions. On advice of our local counsel, we are abiding by the court’s suppression order in Australia because of the presence of our bureau there. It is deeply disappointing that we are unable to present this important story to our readers in Australia and elsewhere. They deserve to know the truth about a public figure of global influence. Press coverage of judicial proceedings is a fundamental safeguard of justice and fairness. A free society is never well served by a silenced press.”

Editor’s note: If you’re interested in these and other related questions, we’ve been discussing the Australian case and the Post’s decision in CJR’s Galley discussion forum.

Pope Francis has removed two cardinals from his informal cabinet amid the Catholic Church’s sex abuse and cover-up scandal, shedding embarrassing advisers ahead of a high-stakes Vatican summit on abuse early next year.

The Vatican said on Wednesday that Francis in October had written to Cardinal George Pell and Chilean Cardinal Javier Errazuriz thanking them for their five years of service on the so-called Group of Nine, or C-9.

Pope Francis has removed two cardinals from his inner circle of advisers. One, George Pell, faces trial for sex abuse; the other is accused of covering up abuse in Chile.

Francis also bid farewell to Congolese Cardinal Laurent Monsengwo Pasinya, who hasn’t been implicated in the scandal but, at age 79, recently retired as archbishop of Kinshasa.

Pell, 77, took leave from his job as the Vatican’s economy minister to stand trial in Australia on historical charges of sex abuse, which he denies.

After Francis realised his errors and apologised, he summoned the presidents of all the world’s bishops conferences to Rome for a three-day meeting in February to discuss protecting young people from paedophiles. That summit has taken on enormous weight, given the eruption of the scandal in the US.

Francis appointed the C-9 in 2013 to help him reform the Vatican and reorganise its bureaucracy. That work is wrapping up, with the finalising of a new document outlining the work and mission of the various congregations that make up the universal government of the 1.2 billion-strong church.

A statement from the Vatican press office noted that the cabinet members asked Francis in September to reflect on the future composition, structure and work of the C-9, taking into consideration especially the advanced ages of some of its members.

Errazuriz, who retired as Santiago archbishop in 2010, had announced publicly in November that he had removed himself from the group. He is currently the subject of civil litigation in Chile by victims accusing him of covering up for recently defrocked priest Fernando Karadima.

Though he has been away from Rome since announcing his leave of absence in June 2017, Pell technically remains prefect of the Vatican’s economy secretariat.