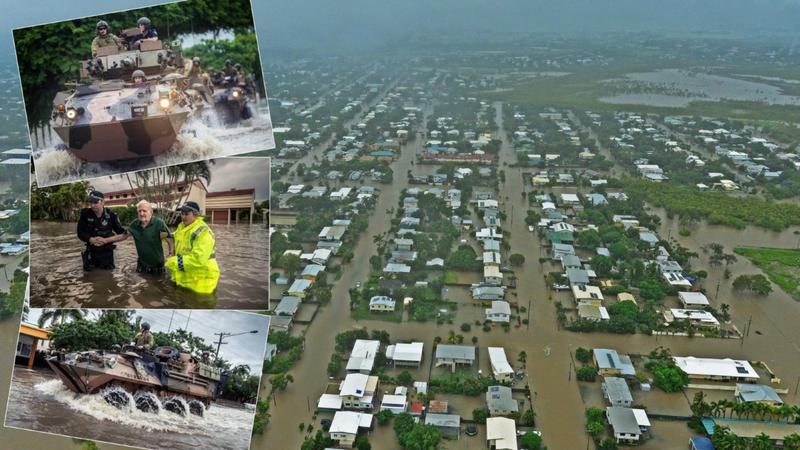 Experts are worried Townsville’s long-awaited economic resurgence has been washed out to sea by the city’s historic flood disaster.

They fear the north Queensland city will lose not only tourists, but broader economic momentum as the clean-up slows down activity in the weeks and months ahead.

After a mining downturn, Townsville has struggled for years with high unemployment.

Townsville Chamber of Commerce chief executive Marie-Claude Brown was concerned industries like retail and hospitality will now take a hit.

“In the longer term, we’re concerned that the money will shrink and the confidence we were starting to see could have been washed away with the flood,” Ms Brown said.

“Certain things are going to be in high demand — carpenters, plumbers, plasters, painters — so that will have an immediate impact,” Ms Brown said.

PHOTO: The clean-up begins at a menswear shop in Townsville. (Photo: Dwayne Wyles)

“But while the recovery is underway in Townsville, there’s not a lot of discretionary dollars going around.”

The economic toll from the flood is not known, however insurers have so far received claims of just over $100 million.

Authorities announced on Friday, 1500 homes and infrastructure in the state’s north and north-west have had minor to severe damage. 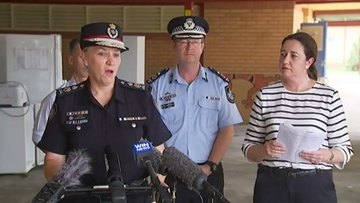 “When you see the devastation, it’s confronting” @QFES_chief getting emotional talking about the disasters that have hit Qld over the last few months @abcnews @abcbrisbane #QldFloods #qldfires

Looters are taking advantage of the situation, with police saying so far there has been 14 attempted break and enters since Sunday, despite 90 extra police being on the ground.

It has also been announced, Major-General Stuart Smith, the state’s disaster recovery co-ordinator, has had his role extended to handle the flood recovery effort.

There is a low chance a cyclone could form off the north Queensland coast in the Coral Sea this weekend.

The Bureau of Meteorology said a low pressure system south-east of Cairns has formed from the monsoon trough that has dumped the unprecedented in the Townsville region.

Forecaster Sam Campbell said the low is not expected to make landfall, and will remain well off the coast until mid-next week.

Prime Minister Scott Morrison said relief payments have been increased to up to $75,000 for people in flooded areas.

“Our initial estimate will be $100 million but as we have seen in other disasters, the cost could be far greater,” he said.

“When the insurance money comes into town, that’s money that comes from outside Townsville, and it’ll be used to reconstruct the economy and that’s going to be a massive influx of money,” he said.

Mr Welters said tradies and retailers would be the biggest beneficiaries as long as the money was spent locally and companies could keep up with demand.

“If you can keep it locally, you get multiplier effects off that money, which will help rebuild the city,” he said.

“The question is can Townsville provide that? As soon as there’s a supply shortage, some of that money will go to construction businesses outside Townsville and that’s good news for them but not for the Townsville economy.”

The State Government and Townsville Mayor Jenny Hill have asked insurance companies to use local businesses as much as possible during any rebuilds.

“Support our community, particularly our small businesses through this tough economic time,” she said.

“We are open for business. It’s important to reinforce the value not only of the immediate recovery but not losing momentum on the long-term plan and key priorities for the region.

“On top of repair and recovery, building the pipeline of jobs has now become more important than ever.

There are also predictions there could be short-term pressure on the rental market as more residents become displaced.

Hundreds of houses have been deemed uninhabitable so far, with that number expected to rise.

A State Housing Department spokesperson said they are processing more than 133 requests for emergency housing assistance and supporting people on an individual basis with accommodation options to meet their differing circumstances and needs.

“Since the flooding began, 67 people in need have been housed in short-term accommodation in Townsville such as hotels, motels and caravan parks,” the spokesperson said.

“The remainder are currently staying with friends, family or in evacuation centres and the department is working to find suitable accommodation for them.”

PHOTO: Residents clean up their homes as floodwaters ease in parts of Townsville in north Queensland. (AAP: Dave Acree)

Real Estate Institute of Queensland’s chair for Townsville Wayne Nicholson said before the floods, Townsville’s rental market had vacancy rates of between three and four per cent, and some offices had even lower.

“Those vacancies will be picked up very quickly,” he said.

“I think the council and even the State Government will be dealing with a short-term crisis when it comes to accommodating people.”

The Government is assessing demand and has transferred families into emergency accommodation at hotels.

Eligibility requirements will be relaxed so flood victims can access help like bond loans and rental grants as they seek alternate accommodation.

Mr Nicholson said it was too soon to tell whether the value of flood-stricken houses would decrease.

“We had the Night of Noah back in ’98, we’ve had Cyclone Althea in 1971, and I can remember vividly the houses were decimated,” he said.

“People said, ‘who would ever live here again’. Well, people are living there again and the prices out there are fairly significant.”