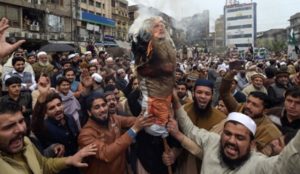 Many Muslims in Pakistan are seeing the prospect of war between India and Pakistan as the latest episode of the 1,400-year jihad against India, one of the bloodiest of jihads, very little known in the West. The History of Jihad From Muhammad to ISIS contains the whole shocking story of the jihad against India, told from Muslim sources.

“Jamaat-e-Islami is recruiting volunteers if India and Pakistan go to war,” by Roohan Ahmed, Samaa, March 2, 2019:

Eleven-year-old Aamir Khan is homeless, doesn’t know who his parents are and doesn’t remember much of what happened to him when he was younger. But of one thing he is certain: the future. He is going to fight a war against India.

“We Muslims will set India on fire,” he said. “We will kill them and blow them up. I hope we will win this fight InshaAllah.”

Aamir is one of hundreds of men, women and children, young and old, who have signed up as volunteers to fight, at a registration camp set up by the Jamaat-e-Islami religio-political party in Karachi.

These volunteers are reacting to a series of events triggered on February 14 which nearly brought India and Pakistan to the brink of war. Tensions were ratcheted up when a suicide bomber killed 40 Indian soldiers in Indian-Administered Kashmir’s Pulwama. This was deemed the deadliest attack since 2002.

In response, Indian planes violated Pakistani airspace. A day later, Pakistan shot down two Indian planes. One plane crashed in Pakistan-Administered Kashmir and its pilot, Wing Commander Abhinandan, was captured. However, in an attempt to de-escalate, Pakistan returned the pilot to the Indian authorities as a “gesture of peace” and Prime Minister Imran Khan urged for talks….

“Over 30,000 people have registered in Karachi alone,” said Hafiz Bilal, the president of the youth wing who happens to be a former student of the University of Karachi. The youth wing, with over 10,000 members, had organized the volunteer drive and set up camps in the city. “We take their names, cell numbers and they all are ready to protect the country with Jazba-e-Jihad (passion for jihad) and Jazba-e-Shahadat (passion for martyrdom).”

The Jamaat-e-Islami has backed a cause to “free” Kashmir for decades with its leaders attending rallies with Kashmiri leaders, including Hizbul Mujahideen head Syed Salahuddin and commander Mast Gul….

The Indian government has banned the Jamaat-e-Islami in Kashmir for “unlawful association” and for activities “prejudicial to internal security and public order”. India did this, argued senior JI leader Naeem-ur-Rehman, because it knew “who provided the resistance” in the Kashmir jihad.

The JI has its own interpretation of the recent attack on Indian soldiers as well. “The Pulwama attack should not be declared a terrorist attack,” Naeem-ur-Rehman said while talking to SAMAA Digital at his office. “It should be said that the young man committed an act of jihad against state terrorism.” He said they considered jihad a religious duty. He added that no civilian was killed at Pulwama; soldiers were targeted….

Asad Munir and Tausif Ahmed Khan argued that Pakistan needs to act against groups motivating people, especially young ones, towards violence. For his part, Munir said that the State should act against groups that motivate people towards jihad because, “the world does no longer tolerate jihad”….