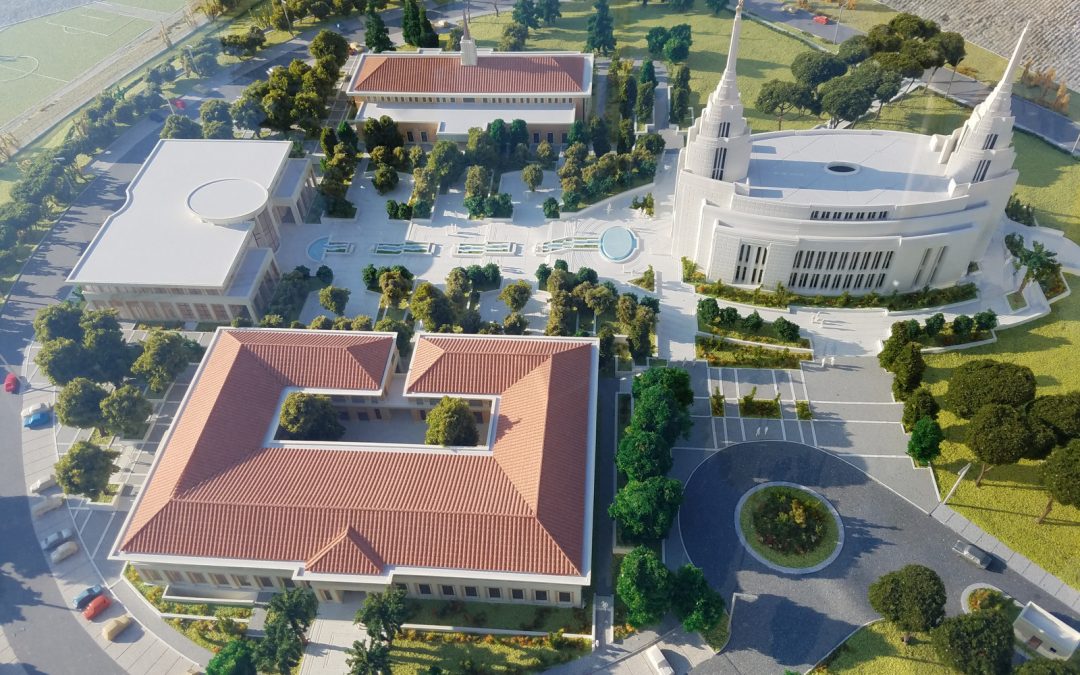 The Pagan Trinity of Sorts in Rome Italy is OFFICIALLY Complete!

(Note: Steve Quayle coined the term “ROMEAGEDDONISM” this morning in an email to me) 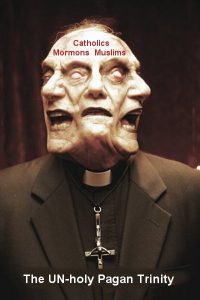 The Vatican, The Mosque of Rome, and now there is a Mormon Temple!!

These Three have officially met and seem to be melding like peas growing in a pod! That is why I call it a Pagan Trinity. If the false prophet meets and makes a deal with the other major religions, then this will needed to be revised.

Rome will probably be the headquarters of the One World Religion until the Anti-Christ goes to Jerusalem and declares himself to be god!!

While researching I also found this:

There is also a Buddhist Temple in Rome, the largest in Europe, and aHindu Temple as well! I am sure there is a major Wiccan Coven, as all these religions are based on Paganism and Witchcraft!

So that is ALL the major religions with representation in Rome Italy! How many more leaders of False Religions has the False Prophet met with behind closed doors and in secret? He met with all of the devils of the major mega-churches from America some time back! Also see:  Together 2016:Luciferian One World Religion Gathering

In MY OPINION, the Seat of Satan has moved from Pergamos, and is now in Rome!!

Make NO MISTAKE ABOUT IT, the Principalities, Powers, Rulers of Darkness and Spiritual Wickedness in High places are now united to declare the One World Religion and to usher in the Anti-Christ!!

Luke 21:28 “And when these things begin to come to pass, then look up, and lift up your heads; foryour redemption draweth nigh.”

Thomas D. Williams | Breitbart News – Pope Francis met with the leaders of the Church of Jesus Christ of Latter-day Saints in the Vatican Saturday, the first meeting ever between the heads of the Catholic and Mormon churches.

The occasion for the meeting was the dedication of a massive new Mormon temple in Rome, the first in the Eternal City, which will take place on Sunday.

On Saturday morning, Pope Francis granted an audience to the president of the Latter-Day Saints, Russell Nelson, along with the 14 elders who make up the church’s top leadership, comprising the First Counselor, Second Counselor, and the Quorum of the Twelve Apostles.

The newly finished 156-foot high edifice — officially called “Temple of Rome” —  was opened to the public for just over two weeks, with guided tours offered from January 28 through February 16. Once the temple is formally dedicated Sunday, entry will be “reserved for faithful members of the Church,” the group’s website states. 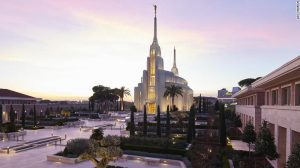 The Mormon Church boasts some 5,000 members in Rome, with a total of 23,000 throughout the Italian peninsula. The Temple of Rome, under construction for nearly ten years, is the first temple of the Latter-Day Saints to be built in Italy, which may well explain the presence of the entire Mormon leadership for its inauguration Sunday — the first time the entire leadership of the church has ever gathered outside the United States.

The Temple of Rome is the 162nd operating temple of the LDS church worldwide and the 12th in Europe. The three-story edifice, encompassing almost 4,000 square meters, is part of a religious and cultural center spread over 15 acres, which includes a multi-purpose building, a visitor center, a family history library, and a guest house.

The Church of Jesus Christ of Latter-Day Saints was officially established in 1830 by Joseph Smith. (Note links about the Mormons, Smith and images are mine, NOT the author of this article)

According to David A. Bednar, who presides over the Church’s Temple and Family History Department, the Mormons “have more than sixteen million members, and the Church is recognized and is present in over 170 nations.” 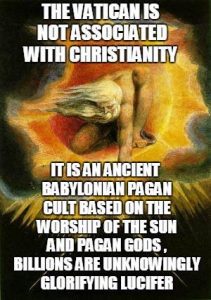 So now we have a complete Pagan Trinity that has united as part of the One World Religion with the Pope leading the way.

Recently the false prophet met with the grand imam of al-Azhar in the United Arab Emirates.

The foundation for a New Religion – Catholislam!

VATICAN CITY — Pope Francis says his pilgrimage this week to the United Arab Emirates wrote a “new page in history of the dialogue between Christianity and Islam” and in promoting world peace based on brotherhood. Source

NTEB – The official logo of the Pope’s visit was chosen from about 50 entries in a competition. An explanatory note accompanying the logo’s release says that a cross and a crescent in the logo are symbols of Christianity and Islam which highlight the interreligious relations between Christians and Muslims. In fact, during the 2-day trip, Pope Francis will meet the leader of Moroccan Muslims, 800 years after the meeting between St. Francis of Assisi and Sultan Al-Malik al-Kāmil of Egypt.  Source

NTEB – A visit between a pope and the man considered a prophet by millions of Latter-day Saints would have been unimaginable to leaders and members in both churches 50 years ago. Clandestine olive branches and decades of détente were necessary, according to sources from both faiths interviewed for this story. That is exactly what has happened. In fact, today’s meeting is a culmination of a web of deepening and expanding alliances between the Latter-day Saints and the Roman Catholic Church and its many sister organizations.

During his reign as both king of Vatican City and as the pope of the Catholic Church, Jorge Mario Bergoglio has been widening his tent and making preparations for the coming One World Religion of Antichrist. From seducing gullible pawns like Rick Warren who gushingly calls him ‘our pope’,  all the way up to signing a ‘Universal Peace Document‘ with a high-ranking leader of Islam, Pope Francis is a man on an end times mission.

“For all nations have drunk of the wine of the wrath of her fornication, and the kings of the earth have committed fornication with her, and the merchants of the earth are waxed rich through the abundance of her delicacies. And I heard another voice from heaven, saying, Come out of her, my people, that ye be not partakers of her sins, and that ye receive not of her plagues.” Revelation 18:3,4 (KJV)

Now a secret, closed-door meeting with the head ‘prophet’ of the Mormon Church, Russell Nelson, reveals the expansion of another end times partnership as the Vatican adds more pieces to their end times chessboard. The Roman harlot is on the move and trading in the souls in men.

Pope Francis meets with Mormon President Nelson in the Vatican

FROM THE DESERET NEWS: “The differences in doctrine are real and they’re important,” President Nelson said afterward as he stood just outside St. Peter’s Square, “but they’re not nearly as important as the things we have in common — our concern for human suffering, the importance of religious liberty for all of society, and the importance of building bridges of friendship instead of building walls of segregation.”

The two world religious leaders shared a belief that faith in God brings morality and stability to society. “If we have a godless society, we have a rudderless ship,” President Nelson said.

The pope extended the invitation for a private audience to the Latter-day Saint leader in conjunction with President Nelson’s trip this weekend to Italy, where he will dedicate the history-making new Rome Italy Temple.

The two men met for 30-35 minutes and also discussed their mutual concern for the youth in their churches, their concern about secularization and the desire for people to worship God, President Nelson said.

The pope presented President Nelson with two gifts, his declarations on the family and on the Islamic faith. President Nelson gave the pope a Lladro figurine of the Christus statue and a copy of “The Family: A Proclamation to the World.”

After the meeting, the Latter-day Saint leaders smiled as they walked arm in arm down Via della Conciliazione — the Road of the Conciliation — to address a large media contingent with the iconic St. Peter’s Basilica in the background.

The most senior Latter-day Saint leader to meet with a pope before today was President Henry B. Eyring, who was greeted by Pope Francis in November 2014 when both spoke at an international marriage summit at the Vatican. President Eyring then was the first counselor in the First Presidency.

A visit between a pope and the man considered a prophet by millions of Latter-day Saints would have been unimaginable to leaders and members in both churches 50 years ago. Clandestine olive branches and decades of détente were necessary, according to sources from both faiths interviewed for this story. That is exactly what has happened. In fact, today’s meeting is a culmination of a web of deepening and expanding alliances between the Latter-day Saints and the Roman Catholic Church and its many sister organizations.

That growing relationship has intensified during the past decade, resulting in collaborations that now have the two churches working side-by-side all over the world on projects vast and tiny.

The Deseret News conducted more than 20 interviews with people from both faiths around the world, from Bosnia to Rome and from Salt Lake City to Norway, to provide a definitive look at how the churches’ combined efforts are not only helping to resolve differences between their own members but delivering emergency humanitarian aid to some of the world’s most vulnerable people — including many at the U.S.-Mexico border — as well as working to defend religious liberty and to bolster families.

“We explained to His Holiness that we work side by side, that we have projects with Catholic Relief Services all over the world, in over 43 countries,” President Ballard said. “We’ve been shoulder-to-shoulder as partners, and try to relieve suffering, trying to help people that are struggling. He was very interested in that and was very cordial , very kind to us.”

On Thursday, Catholics and Latter-day Saints indeed worked side-by-side to help the homeless and refugees in their respective headquarters, Rome and Salt Lake City.

That appeared impossible in the 1950s when, fearing their own congregations would be scandalized if church members knew they were meeting, the leader of the Latter-day Saints came to Salt Lake City’s Holy Cross Hospital for conversations with the head of the Salt Lake City Catholic diocese.

Posted with permission from NTEB