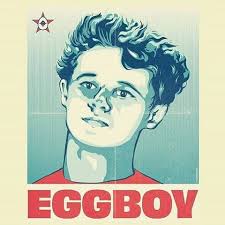 A far-right Australian senator who gained global notoriety when he blamed Muslims for the massacre in New Zealand’s mosques got hit across the back of his head with an egg on Saturday. And it was all caught on camera.

Fraser Anning, an independent member of the Australian parliament who was once part of the anti-immigration One Nation party, was talking to reporters Saturday when cameras caught a 17-year-old man standing behind the politician. The teenager then held up his phone, apparently recording the event and he suddenly slapped a raw egg on the back of Anning’s head. The obviously stunned lawmaker proceeded to twice punch the teenager in the face. Then a brief scuffle breaks out between the pair although bystanders stopped that quite quickly. Supporters then beat and tackled the teenager and aggressively held him in what appears to be a chokehold. The teenager was arrested but later released pending further investigation. 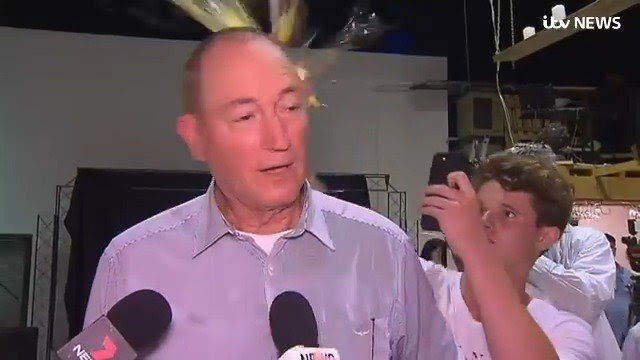 This is the moment an egg is cracked on the head of Australian senator Fraser Anning.

He’s been caught in a row after appearing to blame the New Zealand mosque attack on Muslim immigration https://www.itv.com/news/2019-03-16/australian-senator-fraser-anning-who-blamed-new-zealand-attack-on-muslim-immigration-is-egged/ …

The teen, who has been identified online as Will Connolly, appears to have filmed a short video after the incident warning people: “Don’t egg politicians.” If you do, he said “You get tackled by thirty bogans at the same time. I learned the hard way….”

The boy has been called a hero by thousands and by supported monetarily at an ‘eggboy’ go fund me account to pay for any court fees he may incur.

But is he a hero, or just a brat?  I call it lawless and disrespectful behaviour. I might have a viewpoint but today’s Gen Y and X are too clever for their own good. Take a video and egging a member of parliament for his 17 mins of fame and infamy was unheard in my day.

But today we have tweens ditching school going on climate marches, cause somehow they are gonna save the planet!? 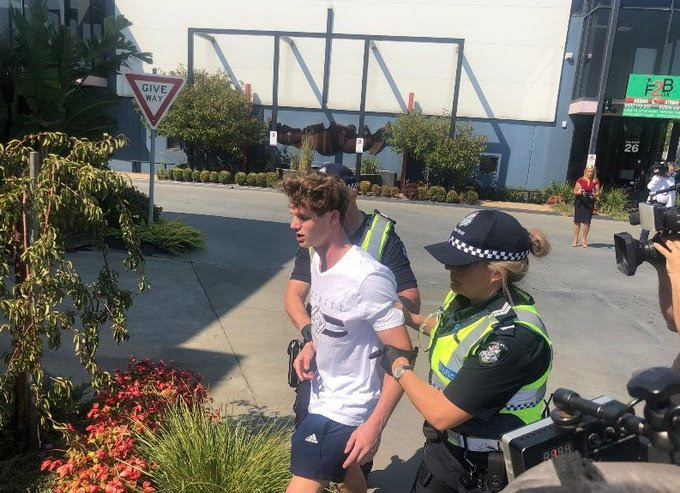 Sitting Senator Fraser Anning has been egged by an angry youth. As of the writing of this report, the youth was taken away by Victorian police. The status of the youth is still unknown. #EggBoy #Auspol #FraserAnning #Melbourne #YARD – https://is.gd/jTBLZl

The egging came shortly after Anning was on the receiving end of lots of criticism for his comments following the massacre. “The real cause of the bloodshed on New Zealand streets today is the immigration program which allowed Muslim fanatics to migrate to New Zealand in the first place,”

Anning said in a statement. Anning also tweeted:  “Does anyone still dispute the link between Muslim immigration and violence?” 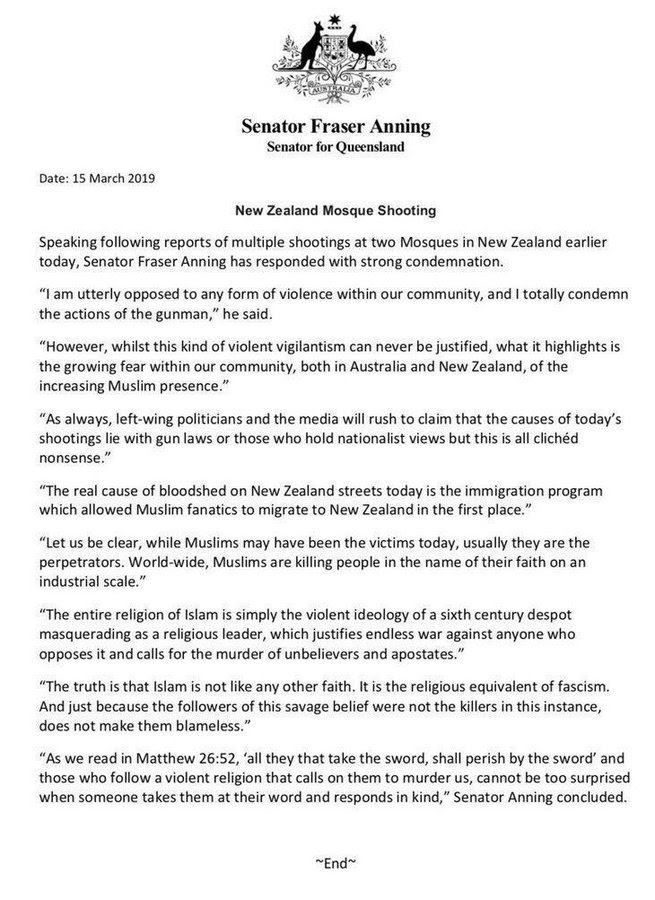 Now we get to the point of the matter.

Read Senator Anning’s statement above carefully, because so far the commentary on local news stations has been that he is a dangerous extreme far right politician who needs to be silenced, and removed from politics altogether.

Here are the main points:

And yes, as predicted by Senator Anning the New Zealand Parliament is reviewing their gun laws today 18 march 2019.

Mmm… not so good. Not all Muslims are fanatics. In fact most are not. Most are genuine kind people.

Although I can’t go along with this statement, what I do accept here is, this is a United Nations program which has meant increased immigration of Middle East people groups who are majority Moslem of faith, changing the mix in populations particularly in Europe.

Again probably not quite correct …. and certainly too much for most to hear and stomach. But certainly if you trace its history and beginnings that is a fair conclusion

The media are playing an essential role in informing us about Islam and influencing how we respond. But, perhaps due to a limited understanding of Islam or a fear of antagonising Muslims, a fundamental point has largely been absent from reporting: the threat of terrorism does not stem from Islam.

Rather, it stems from Islamism, a political ideology.

The two terms may sound similar, but Islam and Islamism are not the same thing. Islam is a faith observed by over 1.6 billion people, whereas Islamism is the political ideology of relatively small groups that borrow concepts like shariah and jihad from Islam and reinterpret them to gain legitimacy for their political goals.

By reporting on this misleading interpretation of jihad and under-reporting Muslim condemnations, the Western news media reinforce the perceived connection between Islam and terrorism.

In some cases, media pundits explicitly make this link, pointing to the fact terrorists specifically refer to “Islam” as the basis for their actions.

This uncritical acceptance of terrorists’ claims and misrepresenting of Islam legitimises and unwittingly promotes the Islamist agenda.

In other words, the media plays into the hands of terrorists by allowing them to become the representatives for Islam and Muslims in general.

It would seem that the opinions of the loud outspoken minority or majority must completely silence the voices of many who cannot necessarily articulate how they feel, but still have legitimate concerns.

This kind of overly simplistic and sensationalist media coverage serves the Islamic State’s objective to pit Muslims and non-Muslims against one another.

As a study conducted at the University of Vienna in 2017 confirmed, media coverage that does not explicitly distinguish between Muslims and Islamist terrorists fuels hostile attitudes toward the general Muslim population.

Yes, there are political and economic motives behind terrorism in addition to religion, and most Muslims are not terrorists, particularly those living in Western countries.

But unfortunately the news cycle does not go by week or so without a report of Islamic terrorists blowing themselves to smithereens, igniting car bombs and IEDs, shooting or stabbing so-called infidels and heretics, and cutting off the heads of or burning alive journalists and other innocents who happened to be in the wrong place at the wrong time. How common are these attacks?

According to a preliminary report issued by scientists at the University of Maryland at College Park working at the National Consortium for the Study of Terrorism and Responses to Terrorism, Islamist terrorists stand out far above domestic terrorists on both the Far Left and the Far right.

Utilizing data from the Global Terrorism Database, which has accumulated information on over 125,000 terrorist attacks from 1970-2013, including 58,000 bombings, 15,000 assassinations, and 6,000 kidnappings, researchers have been able to more carefully identify what the problem is, starting with a clear definition of terrorism: “The threatened or actual use of illegal force and violence by a non-state actor to attain a political, economic, religious, or social goal through fear, coercion, or intimidation.”

Their focus is on terrorism in the United States.

Here are a few of their preliminary findings.

This graph, generated from the Global Terrorism Database by typing in the keyword “Islam” found a total of 5,704 terrorist incidents, the vast majority in the last couple of years, thereby confirming our intuitions that the trend lines match the headlines.

Additional data illuminates why violence may be inherent in the Islamic religion, to the extent that Muslims believe in sharia, especially the parts of the law that command corporal punishment for minor crimes, stoning for adultery, and capital punishment for leaving the Islamic faith.

Senator Anning would certainly not be most people’s spokesman, (nor mine) but nevertheless the story would be different if this story was being reported in some parts of Europe and in the United States. Muslim Immigration has brought many a country to reconsider its stance on immigration. Sweden is now rape capital of Europe. Germany has over one Million refugees. Parts of Paris are a cesspool.

Among Indonesia’s most influential Islamic leaders is Yahya Cholil Staquf, 51,advocates a modern, moderate Islam. He is general secretary of the Nahdlatul Ulama, which, with about 50 million members, is the country’s biggest Muslim organization. Yahya.

This interview, notable for Yahya’s candor, was first published on Aug. 19 in German in Frankfurter Allgemeine Zeitung. Here are excerpts translated from the original Bahasa Indonesia into English.

He says that Western politicians should stop pretending that extremism and terrorism have nothing to do with Islam.

There is a clear relationship between fundamentalism, terrorism, and the basic assumptions of Islamic orthodoxy. So long as we lack consensus regarding this matter, we cannot gain victory over fundamentalist violence within Islam.

Radical Islamic movements are nothing new. They’ve appeared again and again throughout history

So the call by radicals to establish a caliphate, including by ISIS, is not un-Islamic?

No, it is not. [ISIS’s] goal of establishing a global caliphate stands squarely within the orthodox Islamic tradition. But we live in a world of nation-states. Any attempt to create a unified Islamic state in the 21st century can only lead to chaos and violence … Many Muslims assume there is an established and immutable set of Islamic laws, which are often described as shariah. This assumption is in line with Islamic tradition, but it of course leads to serious conflict with the legal system that exists in secular nation-states.

Any [fundamentalist] view of Islam positing the traditional norms of Islamic jurisprudence as absolute [should] be rejected out of hand as false. State laws [should] have precedence.

How can that be accomplished?

Generations ago, we achieved a de facto consensus in Indonesia that Islamic teachings must be contextualized to reflect the ever-changing circumstances of time and place. The majority of Indonesian Muslims were — and I think still are — of the opinion that the various assumptions embedded within Islamic tradition must be viewed within the historical, political and social context of their emergence in the Middle Ages [in the Middle East] and not as absolute injunctions that must dictate Muslims’ behavior in the present … Which ideological opinions are “correct” is not determined solely by reflection and debate. These are struggles [about who and what is recognized as religiously authoritative]. Political elites in Indonesia routinely employ Islam as a weapon to achieve their worldly objectives.

Anyway you look at it, the censure by western media, and the thinking in this politically correct secular culture, as a whole, is hard boiled, scrambled or completely fried.

2 thoughts on “Australia’s Senator Anning, the Eggboy, And the Scrambled Thinking Of Western Culture”