ISRAEL FOLAU OF THE WALLABIES CELEBRATES SCORING A TRY DURING THE INTERNATIONAL TEST MATCH BETWEEN THE AUSTRALIAN WALLABIES AND ITALY AT SUNCORP STADIUM ON JUNE 24, 2017 IN BRISBANE, AUSTRALIA. (PHOTO BY MATT KING/GETTY IMAGES)

Houston,  based in Australia, a preacher who founded the global Christian megachurch with his wife Bobbie in 1983, said he was ‘sad’ about Folau’s post in a tweet. 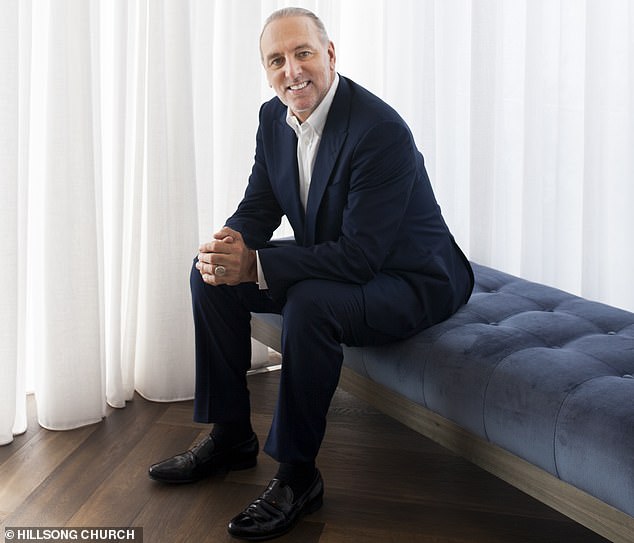 ‘So sad about the (Israel Folau) situation. His way is not the right way,’ Houston wrote in a deleted tweet, according to news.com.au.

‘It does not reflect the grace of the Lord Jesus Christ. The New Testament is clear, but grace does not point fingers. It recognises our own sinfulness. ”But by the grace of God’.’

Brian Houston, founder of Hillsong, penned an open letter to Israel Folau criticising the rugby star’s “judgmental” approach to sharing the gospel on social media. Brian then sent the letter to the Sydney Morning Herald who published it under the title: A message to Folau: The world doesn’t need more judgmental Christians.

The piece divided opinions, and many, including some of Brian’s own supporters, expressed disappointment in his decision to distance himself from Folau. But that’s not the most concerning aspect of Brian’s letter.

Brian doesn’t just take issue with Folau’s approach, he quickly turns his attention to anyone who preaches about sin and judgement, suggesting to an unbelieving world that Christians who speak in such terms have questionable motives, at best.

In 40 years of telling people about the good news of Jesus, I have seen that the “turn or burn” approach to proclaiming the message of Christianity alienates people. Scaring people doesn’t draw them into the love of Jesus.

The problem is, Brian has now found himself at odds with the New Testament. That is why he appeals to forty years of personal experience, rather than any clear example in Scripture.

Houston also said he hopes Folau grows to understand the importance of Christians loving even those who believe differently, and believes the rugby star could benefit from looking inwardly before judging others.

Brian’s previous comment seems odd? By trying to remain balanced Brian contradicts his own theology on the matter.

“If you look at the list of sins that Izzy listed there’s not too many people he’s left out, including Christians. There isn’t a person on earth who hasn’t told a lie or put something before God (idolatry).”

That’s actually the point Brian…..In fact he hasn’t left anyone out, for who among us hasn’t lied, even a small lie? And anyone who makes or creates a God from their own imagination to fit their own personal beliefs and ideas e.g. God loves and forgives everyone, and will let everyone into heaven is in fact idolatry.

By the way Paul in writing to the Colossians suggests greed, the love for money, and covetousness are idolatry.

“Put to death, therefore, the components of your earthly nature: sexual immorality, impurity, lust, evil desires, and greed (covetousness), which is idolatry.” – Col 3:5

So the list is not actually picking on the homosexual or LGBTQ community, but rather to point out the falling short of God’s standard big or small, by EVERYONE regardless of life and status.

For the scriptures clearly state that ‘ALL have sinned and fallen short of the glory of God’ – God’s perfection — See Rom 3:23

So Yes Brian, “The world doesn’t need more judgemental Christians”, but it does need people to tell the truth, which is what Israel Folau has attempted to do.

To ALERT and WARN people of their situation and impeding doom, if they fail to Repent and believe on the Lord Jesus

What Brian seemingly fails to understand is that the “turn or burn” approach finds its origin in the Bible. “Turn or burn” is simply another way of saying “repent or perish”, a message that Jesus himself preached to unbelievers in, for instance, Luke 13:3, 5.

Brian makes a similar claim again when he warns, “The problem with harsh comments in the media and disparaging statements on social media is that they create a further wedge between God and people.” But what greater wedge is there than the one that’s caused by sin?

If sin is the great wedge between God and people, and if Brian is genuinely concerned about the things that keep people from God, then why would he object to anyone drawing attention to that very real, very present wedge we call sin?

Brian’s assumption is that the “repent or perish” message is inherently unloving and sinfully judgemental, yet he has no problem calling Folau to repent of his message. If Folau’s message is a “wedge” and should be addressed, then what should we do about the wedge that is sin?

I would never compromise the integrity of Biblical teaching and I believe that the Bible is clear about the consequences of sin. However, as Christians we are first called to love God and love other people, including those who believe differently to us.

Is Brian suggesting that warning people about the eternal consequences of sin and pointing them to the only Saviour from that sin is inherently unloving? If Brian actually believes there are real present and future consequences for sin – including hell – then how is downplaying that reality anything other than dishonest?

It comes after Rugby Australia vowed to terminate Folau’s multi-million-dollar contract unless he can explain his social media attack, while the NRL has ruled out welcoming him back to the code.

Folau, a devout Christian, is one of the best rugby players in the world but has found himself in hot water before over homophobic tweets and Instagram posts.

Rugby Australia officials have struggled to manage Folau’s outbursts amid fears major sponsors could pull out if he is not sacked.

Qantas on Thursday appeared to threaten to pull the plug on their huge Wallabies sponsorship deal if Folau is not appropriately disciplined.

‘These comments are really disappointing and clearly don’t reflect the spirit of inclusion and diversity that we support,’ a Qantas statement read.

‘We are pleased to see Rugby Australia’s condemnation of the comments and will await the outcome of their review.’ 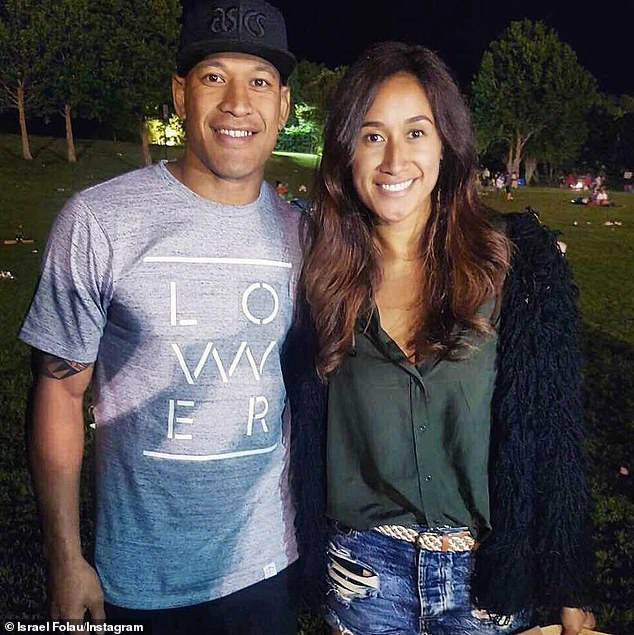 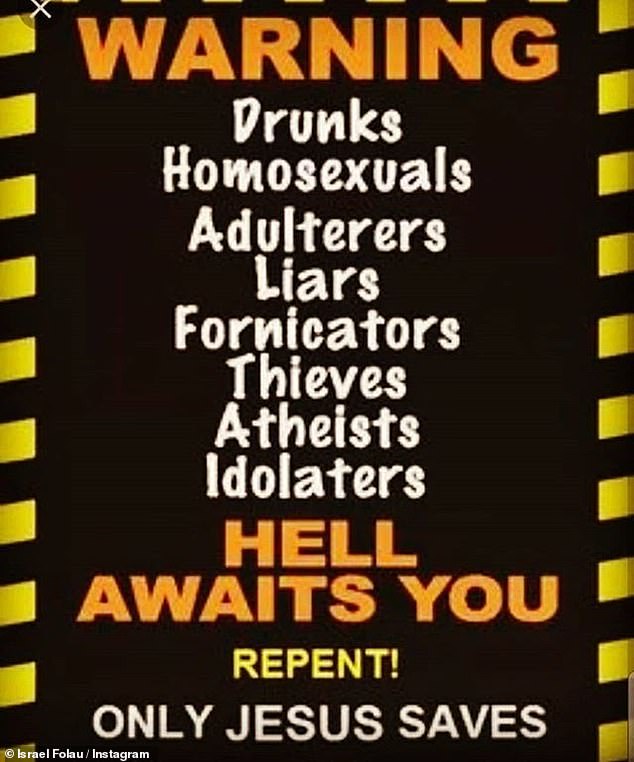 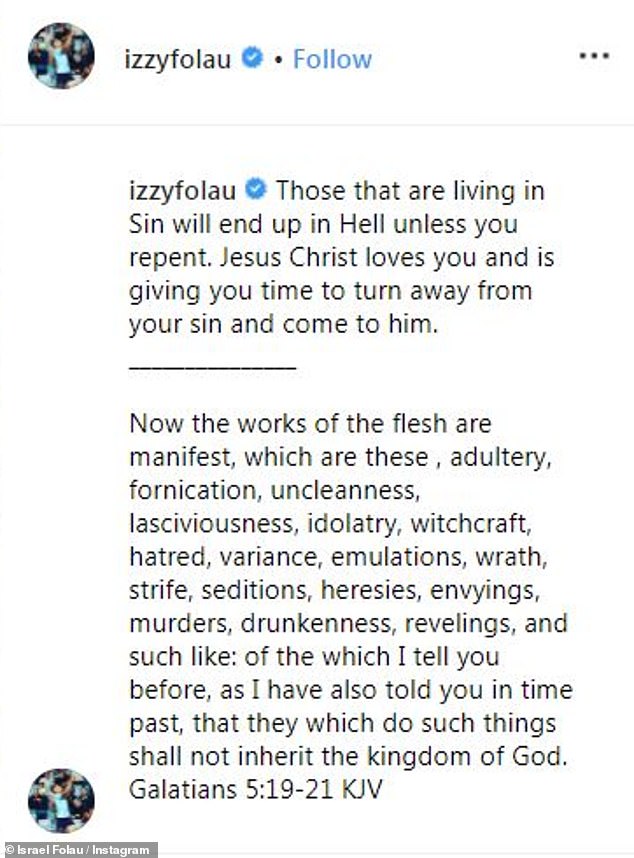 Folau shows us, if we care to stop and listen is that no one is perfect, we all need a Saviour, One of so generously, and sacrificially paid the price with His life so that His perfection could cover our imperfection.

The only thing remarkable about a footy player quoting a well-known Scripture to preach the Gospel is that this is considered an unforgivable offence instead of sharing group sex videos or being arrested for public drunken brawls.

Mark the hypocrisy with which the world, on one hand condemning the Bible-thumping preaching of the Gospel by a footy player, now on the other hand mourns and laments the Cathedral of Notre Dame in literal flames. The contrasts are remarkable.

The world has piously intoned, “We reject God’s concerns about us in eternal flames as hateful bigotry; but mourn the temporary flames that burn down a Catholic Cathedral.”

The devout Christian has shared similar sentiments in the past and was warned by Rugby Australia boss Raelene Castle. Pictured: Folau’s post on Wednesday

Late on Wednesday, a Rugby Australia spokesman said Folau’s post was ‘unacceptable’ and added that the organisation’s integrity unit was ‘engaged on the matter’.

He was previously warned by Rugby Australia boss Raelene Castle to avoid controversial comments of this nature after he shared similarly controversial posts.

‘The content within the post is unacceptable. It does not represent the values of the sport and is disrespectful to members of the Rugby community.

‘The Rugby Australia integrity unit has been engaged on the matter.’

‘I thought they were terribly insensitive comments and obviously that was a matter for the ARU and they’ve taken that decision,’ Mr Morrison told ABC News on Friday.

In February, Folau signed a multi-million dollar contract extension with the New South Wales Waratahs and Rugby Australia until the end of 2022.

His post on Wednesday warned that those ‘living in sin will end up in Hell unless you repent’.

‘Jesus Christ loves you and is giving you time to turn away from your sin and come to him,’ Folau posted alongside two bible verses.

The star fullback also retweeted a story about Tasmania allowing gender to be optional on birth certificates. 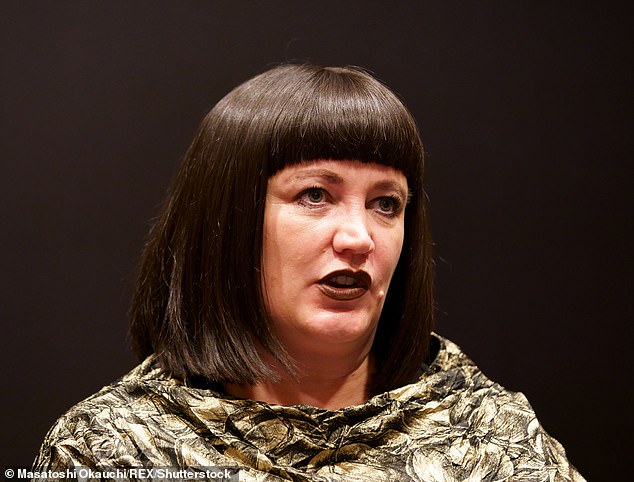 ‘The devil has blinded so many people in this world, REPENT and turn away from your evil ways. Turn to Jesus Christ who will set you free,’ Folau tweeted.

In April 2018, Folau said gay people deserved to go to ‘HELL… unless they repent of their sins and turn to God’.

Folau made the comment on Instagram in reply to a question about God’s plan for gay people.

Ms Castle said Folau had caused ‘grief to some people’.

‘Israel has presented his situation to us, where his views are, where his beliefs are,’ Ms Castle said.

‘But at the same time Rugby Australia has also got a policy and a position of inclusion and using social media with respect.

‘Now both of us are going to go away and continue that dialogue, and work through how we continue to use how our social media platforms in a way that can ensure that all of our stakeholders are respected in the use of social media.’

During 2017’s same sex-marriage vote, Folau tweeted that he would not be supporting any change to the existing law.

‘I love and respect all people for who they are and their opinions, but personally, I will not support gay marriage,’ he said.

He was raised as a Mormon and switched to the Australian Christian Churches with his family in 2011. 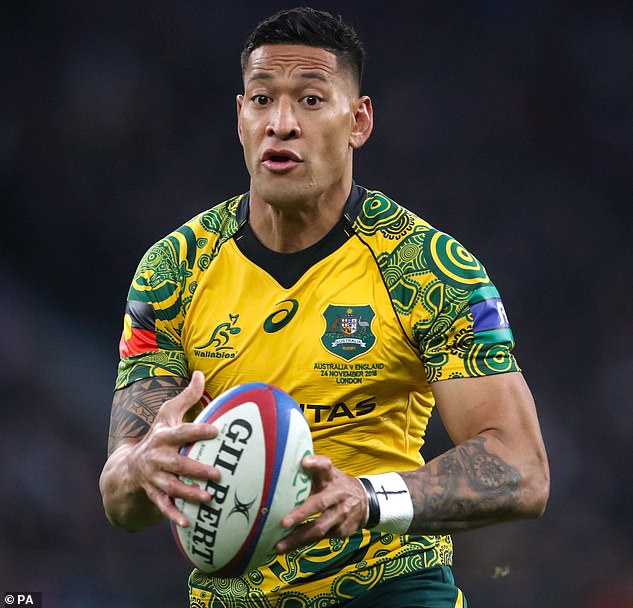