Authored by Matthew Ehret via The Strategic Culture Foundation,

China’s Belt & Road Initiative (BRI) is a whopping $1 Trillion global infrastructure project with the official aim to spur economic and political coordination among countries across the globe through enhances connectivity, financial integration, new-age infrastructure and unimpeded trade. From a pessimist’s (or rather a realist’s) eye, it is a “state-backed campaign for global dominance, a stimulus package for a slowing economy, and a massive marketing campaign for something that was already happening – Chinese investment around the world.”

On April 10th, China’s Premier Li Keqiang celebrated the completion of the 1st phase of the 2.5 kilometer Chinese-built Pelgesac Bridge in Croatia across the Bay of Mali Ston alongside Croatian Prime Minister Andrej Plenkovic.

This ceremony marked a striking victory as the following day ushered in an important 16+1 Heads of State summit that saw Greece inducted as the newest member of a new alliance of Central and Eastern European nations who wish to cooperate with China. At this summit held on April 12, Greece’s Prime Minister Alexis Tsipras stated that this was “a very crucial moment for global and regional developments” and “we have to leave behind the crisis and find new models of regional and global cooperation.” 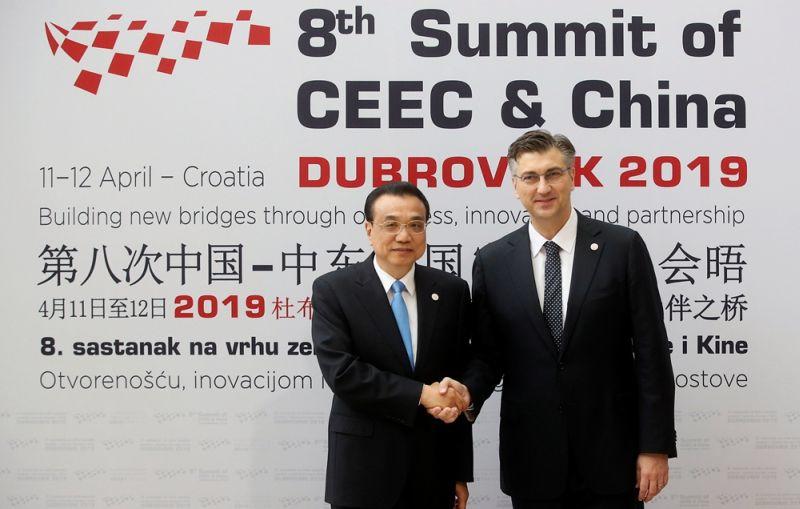 Of course, Greece’s involvement in this alliance (now renamed the 17+1 CEEC) has broadened its geographical boundaries to the west and is especially important as Greece’s Port of Piraeus is a strategic east-west trade gate way for the Belt and Road Initiative (BRI) into Europe centered on the China-Europe Land-Sea Express Route.

Greece is painfully aware that its survival depends upon China’s BRI, as the EU programs for austerity, privatization and bailouts have brought only death and despair with a collapse of youth employment, crime rate spikes and suicide.

It is also not lost on anyone that this breakthrough follows hot on the heels of Italy’s joining of the Belt and Road Initiative on March 26 and also serves as a precursor to the second Belt and Road Summit which will take place in Beijing at the end of April, involving over 126 nations who have already signed MOUs with the BRI and thousands of international businesses.

Ten additional BRI-connected agreements were signed between Croatia and China before the 17+1 Summit including the modernizing of rail lines (especially from Zagreb to the Adriatic port of Rijeka), telecommunications cooperation between Huawei and Croatian Telecom and major port, roads, harbors, education and cultural cooperation.

The Belt and Road Initiative, as Tsipras aptly pointed out, is not just another set of infrastructure programs designed to counterbalance western hegemony, but is rather a “new model of regional and global cooperation” founded upon a principle of mutual development and long term thinking not seen in the west since the death of Franklin Roosevelt and the takeover of the Anglo-American Deep State that ensued.

The fact that China formalized an economic and trade cooperation agreement with the Russian-led Eurasian Economic Union in May 2018 is extremely relevant as it incorporated its five nation membership of Russia, Belarus, Kazakhstan, Armenia and Kyrgyzstan directly into the BRI. Already China has invested $98 billion into the real economies of the EEU involving 168 BRI-connected projects.

The new model of development which has increasingly won over central, and eastern Eurasian countries as well as Greece and Italy have provided a breath of fresh air for citizens everywhere who are looking with despair upon a Trans-Atlantic system which can do nothing but demand obedience to a defunct set of rules that commands only austerity, hyperinflationary banking practices and no long term investment into the real economy. Thus the technocratic mobilization against the BRI over the past days in response to this new paradigm can only be seen as an absurd attempt to save a system which has already failed. Two recent counter-operations against the BRI and the new win-win operating system it represents are worth mentioning. The first is found in the formation of a trilateral alliance between the American-based Overseas Private Investment Corporation (OPIC), Canada’s Finance and Development Agency (FinDev Canada) and fifteen members of the European Union announced on April 11.

A second counter-operation was created several days earlier with the Canada-Germany-France-Japan “Alliance for Multilateralism” during the G7 meeting in France. 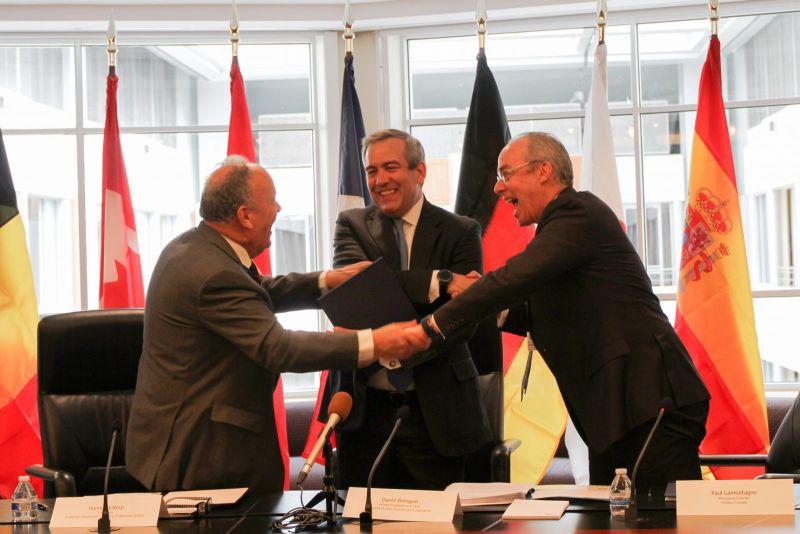 While OPIC was founded in 1971, its use as a subversive force against the BRI was formalized on July 30, 2018 when it created a trilateral alliance with Japan and Australia in order to finance infrastructure in the Pacific basin. Added to this, a second trilateral alliance was created on April 11, 2019 when Canada’s Paul Lamontagne (head of FinDev Canada), the European Development Finance Institution’s Nanno Kleiterp and OPIC President David Bohigian signed a new agreement to create a parallel infrastructure financing mechanism. Taking aim at China, the press release stated that the alliance “will enhance transactional, operational, and policy-related cooperation among participants and underscores their commitment to providing a robust alternative to unsustainable state-led models.”

At this signing Bohigian stated “we’re trying to hold up an example for the world of the way development finance should work” clearly attacking China’s “incompetent” concept of development finance and thus ignoring the fact that over 800 million people have directly been lifted out of poverty by China’s approach to investment. Bohigian was clearly hoping that the world would ignore the vast debt slavery and chaos spread by 50 years of IMF-World Bank dominance that has produced no real growth of nations. Although the American BUILD Act has increased US government funding to OPIC from $29 billion to $60 billion over one year, no serious integrated design for development has been presented and instead provides fodder for laughter at best.

The other anti-BRI operation mentioned is the German-French-Japanese-Canadian “Alliance for Multilateralism” which saw Canada’s Foreign Minister Chrystia Freeland stating at a press conference in France that “Canada has formally joined a German French coalition armed at saving the international world order from destruction by various world dictators and autocrats”. While Freeland didn’t mention Trump by name here, France’s ambassador to Canada Kareen Rispal was more candid stating “Mr. Trump doesn’t like to value multilateralism”. Citing his withdrawal from COP21, and criticism of the WTO, UN and NATO the envoy continued “it sends the wrong message to the world if we think that because Mr. Trump is not in favor of multilateralism, it doesn’t mean we- I mean countries like Canada, France and Germany and many others- are not still firm believers.” 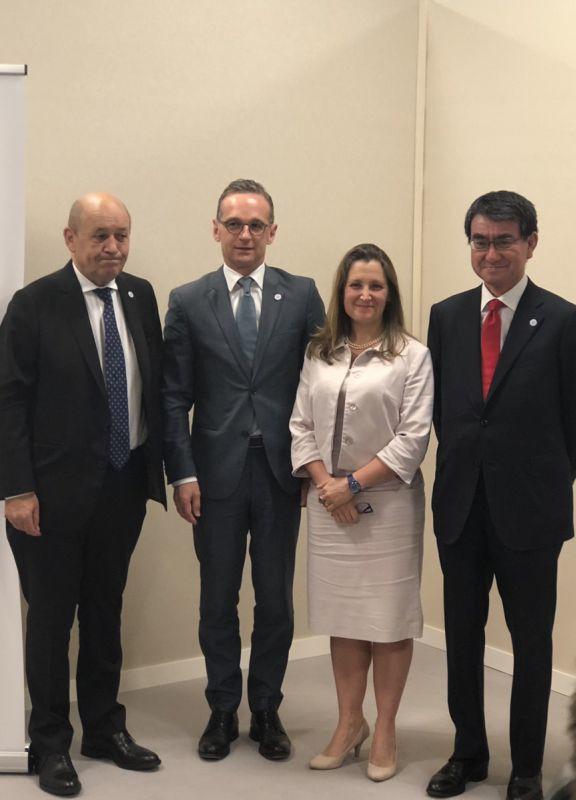 What exactly this “Alliance for Multilateralism” IS remains another question entirely, as no actual policy was put forth. After the smoke had cleared, it appears to be nothing more than a lemming-like club of hecklers yelling at Putin, Xi Jinping, Trump and other “bad people” who don’t wish to commit mass suicide under a Green New Deal and technocratic dictatorship.

Commenting on these developments in an April 10 webcast from Germany, Schiller Institute President Helga Zepp-Larouche made the following apt observation:

“Geopolitics has to be thrown out of the window, and the New Silk Road is the way to industrialize Africa, to deal with the Middle East situation to get peace there, to establish a decent working situation between the United States, Russia and China: And that is for Europe what we should demand. And the best way to do that is that all of Europe would sign MOUs with the Belt and Road Initiative, then that would be the single most important thing to stabilize world peace and get the world into a different domain.”

With Russia and China leading a new coalition of nations fighting to uphold the principles of sovereignty, self-development and long term credit generation under the framework of the Belt and Road Initiative, a great hope has presented itself as the Titanic that is the City of London and Wall Street continues to sink ever faster into the icy waters of history.