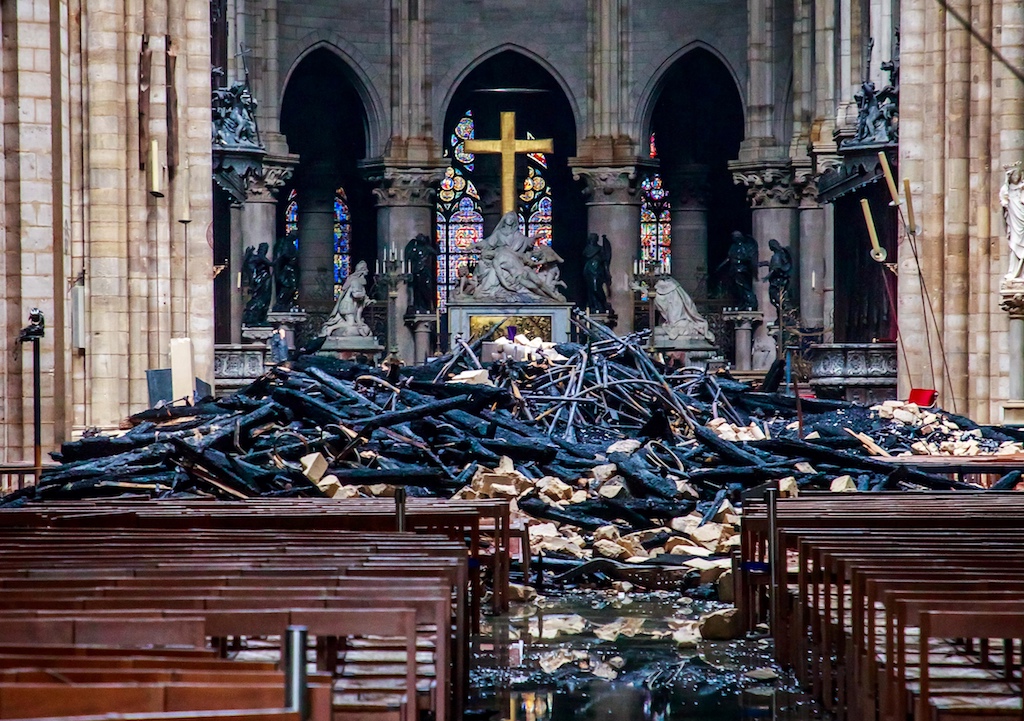 Debris inside the Notre Dame Cathedral in Paris a day after a fire devastated the building.

Paris (AFP) – People around the world have pledged more than $1 billion to rebuild Notre Dame. But according to a spokesman for the cathedral, that still might not be enough to cover it.

“We don’t know if it’s enough or not,” Andre Finot told CBS News’ Roxana Saberi. “You can say it’s crazy to have a billion euros but we don’t know. Maybe the cost is two or three billion.”

Days after a fire engulfed Paris’ beloved Notre Dame Cathedral, fundraising efforts neared the $1 billion mark. But officials estimate the international surge in donations may not yet cover the rebuilding costs.

Stephane Bern, who heads heritage renovation programs across France, estimates the cost to completely repair the church will reach $1.13 billion to $2.3 billion.

A spokesman for the cathedral told CBS News that current donations may not cover those costs.

French President Emmanuel Macron has called for Notre Dame to be rebuilt in five years. France, he said, would “convert this disaster into an opportunity.” Architects say the repairs could take decades.

“Paris needs Notre Dame,” said Aime Cougoureux, the owner of Ma Bourgogne, a popular restaurant near the Victor Hugo museum. “The tourists love it, too, especially Americans. When there are no Americans in Paris, it’s an economic crisis.”

International news coverage has spotlighted negative reactions, often accompanied by a general sympathy for the massive rebuilding cause. A common position among critics: The mega-donations prove social problems could be quickly addressed if the wealthy were motivated to do so.

The Paris prosecutor’s office is urging people who are donating money to beware of scams. For almost every authentic effort to raise money for the cathedral’s restoration, there’s a crook seeking to capitalize on its devastation.

Some of the legitimate charities you can donate to include Friends of Notre Dame, The French Heritage Society, La Fondation Avenir du Patrimoine a Paris and The Basilica of the National Shrine of the Immaculate Conception.

Finot said it could take weeks to learn what caused the fire that raged for at least 12 hours and devoured the roof of Notre Dame, leaving a hole where its spire once stood.

He doesn’t think it was linked to renovations taking place when the blaze broke out.

“There were too many protections on these renovations,” Finot said.

According to Finot, there are also smoke detectors throughout the cathedral.

Rebuilding is likely to take years, which means ceremonies like yesterday’s Good Friday procession that usually take place inside the cathedral will have to be held in its shadows.

Meanwhile French police said they arrested more than 200 “yellow vest” demonstrators in Paris on Saturday as clashes broke out with demonstrators turning out for a 23rd week of anti-government protests.

AFP journalists reported scuffles between police and protesters in the afternoon, after hours of calm, as police used stun grenades and tear gas to disperse marchers in the centre of the French capital.

Some protesters threw bottles and other objects at police and set fire to vehicles, safety barriers and bins.

Between the two major squares of Bastille and Republique the damage done had been considerable, said Emmanuel Gregoire, deputy mayor of Paris, told AFP.

“The violence has to stop!” he added.

Across France, the authorities mobilised more than 60,000 police officers and paramilitary gendarmes to try to contain what they feared would be a surge in violence similar to the March 16 riots that wrought havoc along the Champs-Elysees.

Paris police reported 227 arrests and more than 20,500 checks on individual protesters. By early evening, 178 had been detained, including six minors, said the prosecutors office.

Interior Minister Christophe Castaner congratulated the police on limiting the damage, “despite the willingness of some demonstrators to break things again”.

Although the main protest took place in Paris this weekend, there were also demonstrations in other cities, including Lille in the north and Bordeaux and Toulouse in the southwest.

Yellow vest protests were banned from the area around Notre-Dame Cathedral, parts of which are still sealed off after Monday’s devastating blaze.

But more than one protester expressed frustration at the largesse of several French tycoons who have promised millions towards the cathedral’s restoration.

“We’re worth a cathedral,” said one placard at a protest in Montpellier.

A set of motorbikes are set alight during a yellow vest demonstration in Paris, Saturday, April 20, 2019. French yellow vest protesters are marching anew to remind the government that rebuilding the fire-ravaged Notre Dame Cathedral isn’t the only problem the nation needs to solve. (AP Photo/Francisco Seco)

Others picked up on a tweet by French writer Olivier Pourriol.

“Victor Hugo thanks all those generous donors ready to save Notre-Dame of Paris and proposes they do the same thing for Les Miserables,” he wrote referring to Hugo’s famous novel about the poorest people in Paris.

The fire at Notre-Dame forced French President Emmanuel to postpone a live broadcast announcing fresh measures to try to meet the grievances of ordinary French citizens.

He will now unveil that package on Thursday, though many yellow jackets protesters have already made it clear they expect little.

Health officials in Paris meanwhile denied allegations that hospital staff had passed on the details of injured yellow vest protesters to police.

One protester, 30-year-old Sebastian Maillet, who lost a hand when a police stun grenade exploded during one of the February protests in Paris, has announced legal action.

And on Friday, the National Council of the Order of Doctors said they had contacted the health minstry and France’s data protection watchdog CNIL, raising questions about patient confidentiality.

In a joint statement Saturday, the Paris state hospitals body (AP-HP) and the regional health authority insisted the files were simply to ensure the most effective treatment of injured people.

The government has already been criticised at home and abroad about the number of serious injuries protesters have suffered during the demonstrations.

There has been controversy too over new powers granted to the security forces, which opponents say violate civil liberties, measures that Macron signed into law earlier this month.

One measure banned protesters from covering their faces, but France’s Constitutional Council, its highest constitutional authority, refused to give the green light to one of the most contentious parts of the legislation.

It would also have given the authorities the power to ban from demonstrations any individual “posing a particularly serious threat to public order”.

The yellow vest movement is demanding changes to the government’s social and fiscal policies.

Interior ministry figures put the number of demonstrators nationwide at 27,900 across the country and 9,000 in Paris.

Protest organisers, who have repeatedly said the official figures are underestimated, put the turnout across the country at more than 100,000

Demonstrators attend to a motorbike which was set alight during a yellow vest demonstration in Paris, Saturday, April 20, 2019. French yellow vest protesters are marching anew to remind the government that rebuilding the fire-ravaged Notre Dame Cathedral isn’t the only problem the nation needs to solve. (AP Photo/Francisco Seco)

The Latest on the yellow vest protests in France (all times local):

French yellow vest protesters have set fires along a march through Paris to drive home their message to the government that rebuilding the fire-ravaged Notre Dame Cathedral isn’t the only problem France needs to solve.

Like the high-visibility vests the protesters wear, the scattered small fires in Paris appeared to be a collective plea to French President Emmanuel Macron’s government to “look at me — I need help too!”

Police fired water cannon and sprayed tear gas to try to control radical elements rampaging on the margins of the largely peaceful march.

The protests marked the 23rd straight weekend of yellow vest actions against Macron’s centrist government, which they see as favoring the wealthy and big business. Protesters view themselves as standing up for beleaguered French workers , students and retirees who have been battered by high unemployment, high taxes and shrinking purchasing power.

Masked protesters and helmeted riot police have clashed repeatedly in Paris amid tensions on the edges of a yellow vest protest.

Tear gas hung in the air throughout the afternoon Saturday around the Place de la Republique plaza in eastern Paris.

Radical protesters hurled paving stones and flares, attacked at least one boarded-up store, and set fire to a few vehicles. Police repeatedly charged as they tried to contain the crowd.

Meanwhile a separate, smaller crowd of yellow vests marched peacefully toward the cordoned-off neighborhood around the fire-damaged Notre Dame Cathedral. Young women skipped down a street along the Seine River with drummers and singers.

They are urging the French government not to forget the troubles of the poor even as it gathers millions to rebuild the cathedral.