The US ambassador to Nato has warned Russia that if it does not halt the development of a new cruise missile in violation of a treaty between the countries, the US will “take out” the missile. 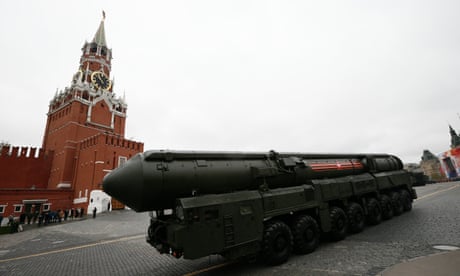 Moscow has denied the charge, and the Trump administration has announced plans to develop its own medium-range cruise missile in response, raising the spectre of a new nuclear arms race.

But Hutchison went further in her remarks and appeared to suggest the possibility of a pre-emptive strike when the Russian missiles became operational.

“The counter-measures would be to take out the missiles that are in development by Russia in violation of the treaty,” the envoy said, mistakenly referring to the missile in question as a ballistic missile, rather than a cruise missile. She also suggested the missile, known as 9M729, was still in development, even though the US accused Russia of deploying it last year.

“Getting them to withdraw would be our choice, of course. But I think the question was what would you do if this continues to a point where we know that they are capable of delivering. And at that point we would then be looking at a capability to take out a missile that could hit any of our countries in Europe and hit America in Alaska.”

“It seems that people who make such statements do not realise the level of their responsibility and the danger of aggressive rhetoric,” the ministry spokeswoman, Maria Zakharova, said, according to Tass news agency.

A few hours later, Hutchison clarified her remarks on Twitter, insisting she was “not talking about preemptively striking Russia”, adding that Russia “needs to return to INF Treaty compliance or we will need to match its capabilities to protect US and Nato interests”.

Hutchison did not specifically explain what she meant by her warning that the US would “take out” the Russian missile.

A US threat of a pre-emptive strike against Russia would be unprecedented since the end of the cold war, and a dangerous new departure in rhetoric and military posture towards Russia.

“If she is saying that if the diplomatic route doesn’t work we will destroy the missiles, that’s obviously dangerous and risks triggering a war that could go nuclear,” Daryl Kimball, the head of the Arms Control Association, said. “I cannot recall anything like this in the post cold-war period.”

Some nuclear experts speculated that Hutchison may have misspoken, and meant to say that the US would develop ways of destroying the Russian missile for use in the event of a conflict.

Hans Kristensen, the director of the nuclear information project at the Federation of American Scientists, said: “I don’t think the Nato ambassador is threatening pre-emptive attacks against Russian development of INF weapons. She did a poor job in trying to repeat what the US has been saying for several years; that it is contemplating measures in response to the Russian INF violation.

“That can include tweaking existing strike capabilities to hold the new weapons at risk, developing new ones for potential deployment, and/or increasing economic and political pressure on Moscow to return to compliance.”

Kristensen said: “This is going to feed right into the paranoia of Russian planners. She will definitely have to make a follow-up statement to clarify what she intended to say.”

The Russian Ministry of Foreign Affairs has called on the United States to drop what it called irresponsible plans to deploy a missile defense system in space, saying the move risked fueling an arms race.

The ministry said in a statement that the plans from the US looked like an attempt to resurrect the so-called Star Wars programme or U.S. Strategic Defence Initiative which was first announced in the 1980s by then U.S. President Ronald Reagan.

Moscow said it was “deeply concerned” by the U.S. plans which it said it interpreted as confirmation that Washington intended to use space for military purposes in the near future.

The United States is capable of attacking Russia from space, a senior Russian general said Wednesday.

U.S. President Donald Trump unveiled a plan in January calling for the development of space-based sensors to shoot down missiles before they can threaten U.S. soil, among other capabilities. Moscow warned the new U.S. missile defense strategy would unleash a dangerous arms race in space, saying it amounts to a relaunch of the Cold War-era “Star Wars” program. 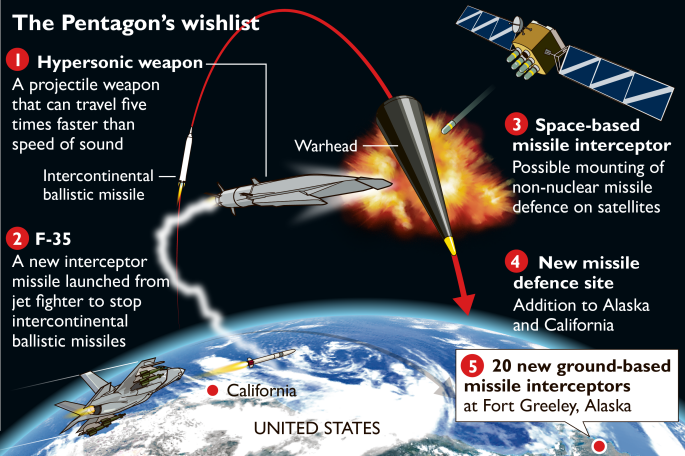 Speaking at a security conference in Moscow, Poznikhir blamed the U.S. missile defense systems for enabling the country to deliver a “surprise missile and nuclear strike on Russia.”

Russia is responding to the perceived threat by arming its strategic offensive forces with the Sarmat intercontinental ballistic missile and the Avangard hypersonic missile, he was quoted by the state-run TASS news agency as saying.

President Vladimir Putin had said the Avangard would be deployed in 2019 and noted that the Sarmat — known as “Satan-2” in the West — was in the final test phase.

Pentagon officials contend that U.S. missiles defenses are too few to be able to counter a first-strike on the U.S. homeland by a major nuclear power, like Russia or China. Washington hopes those countries will instead be deterred from attacks by America’s nuclear arsenal.