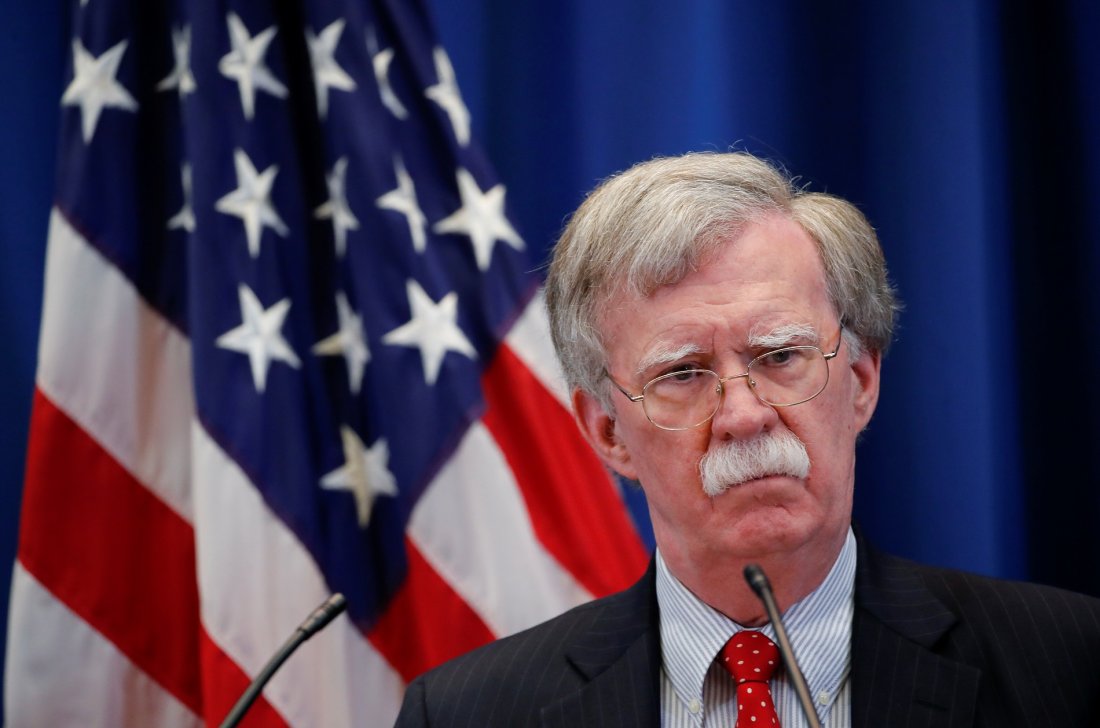 Iran is accusing the United States of “psychological warfare” after National Security Advisor John Bolton announced the U.S. is deploying a carrier strike group and a bomber task force to the region. In a statement on Sunday night, Bolton said the move was intended to “send a clear and unmistakable message to the Iranian regime that any attacks on United States interests or on those of our allies will be met with unrelenting force.” On Monday acting Defense Secretary Patrick Shanahan said the deployment was made because of a “credible threat by Iranian regime forces” but he offered no details.

Axios is reporting the threat is based on information passed on from Israel.

The Trump administration also said it will end a waiver program that allowed some nations to circumvent U.S. sanctions and continue buying Iranian oil without suffering penalties.

Trita Parsi is the author of “Losing an Enemy: Obama, Iran, and the Triumph of Diplomacy.” He is the founder and former president of the National Iranian American Council, and an adjunct associate professor in the Center for Security Studies at Georgetown University.

Well, I think the deployment of this warship to the Persian Gulf is, in and of itself, not very significant.

It is everything else that is taking place around it. And we have talked about it on this show before—that John Bolton has been trying to move matters towards a military confrontation with Iran. And he appears to be getting closer and closer to that.

And in those 20 years, his best shot yet is probably the one that exists right now, because we have a public that is much more focused on tax returns, the Mueller investigation, Russiagate. We have no secretary of defense right now at the Pentagon. We have a president that is preoccupied with other things and beyond that doesn’t seem to understand geopolitics that much. So the pathway for John Bolton to be able to aggressively escalate matters towards war with Iran is more open now than it has been before. And that’s exactly what he seems to be taking advantage of right now when making statements about this deployment of the warship, making it sound as if it was aimed at deterring an Iranian so-called threat, whereas in reality it was scheduled to go there long before.

Trita, for some of our audience that’s perhaps younger, you talk about the two-decade effort of Bolton. Could you talk a little bit about his role during the Iraq war?

Yeah, I think this is very important to keep in mind.

We can have a debate and discussion, a legitimate discussion as to what Donald Trump’s true intentions with Iran may be. Perhaps he is actually doing this because he ultimately believes that this will lead to a negotiation.

We cannot have much of a discussion about what John Bolton’s true intent is because he has already made that very clear. He has written about it in public for more than 20 years. He wants war with Iran. And he played a significant role in the fabrication of lies in the run-up to the Iraq war and pushing for that disastrous war.

This is all happening, Trita, at a time when the trade talks are ramping up with China and President Trump is threatening to impose tariffs on China by Friday from 10% to 25%. And you have this situation where China is pushing back against the United States’ decision to broaden its crackdown on Iranian oil exports, saying countries like China will no longer receive a waiver. But a large portion of China’s oil is from Iran. Talk about this geopolitical issue.

So what the United States and the Trump administration is doing with these waivers is that they’re trying to take all of Iran’s oil off of the market in the hope, ostensibly, to collapse the Iranian economy. And in the case of Trump, perhaps he believes that that would lead to negotiations in which the Iranians would capitulate. In the case of John Bolton, I’m pretty convinced that he thinks that this will lead to an Iranian counter-reaction that he can then use as a casus belli in order to start a war.

But I think what’s also taking place here is that the Trump Administration is essentially forcing countries to not only leave Iranian oil, but to replace that with American oil and change the refineries from the type of a crude oil which is much heavier that the Iranians export to the lighter crude that the U.S. is exporting. So this is about long-term market shares for the United States as well. And it’s not based on actually competitiveness or anything like that. It is the Trump Administration strong-arming these countries to force them to buy American oil instead.

And Trita Parsi, what has been the reaction of the Iranian government to these latest announcements of Bolton? And also, what, in your view, should—what is the role of Congress? What should Congress be doing at this time to rein in this apparent move by some members of the Trump Administration to push for war?

Paul Pillar, formerly with the CIA, had a very important piece in LobeLog yesterday, in which he pointed out that for the last year, the Iranians have shown some tremendous discipline and restraint, because they have not responded to these provocations from the Trump Administration, and they are still adhering to the nuclear deal from 2015. But there are signs that that patience on the Iranian side is running out, because they are clearly not getting any of the major or important benefits from that nuclear deal, and the United States is continuously violating that deal, and even punishing countries who are trying to adhere to that deal. So I think we are starting to reach a point in which it is quite likely that the Iranians will start walking away from some of their commitments as well, and that will be a very, very dangerous scenario.

Now, what has Congress done? Well, so far, Congress has done very, very little, and I think this is very worrisome. It goes back to the fact that so much of our focus right now are on domestic issues or some of the other major crises that the Trump administration has started. You do have Senator Dick Durbin and Tom Udall who just had an op-ed in The Post today as well as have introduced S.3517, trying to prevent a war. But I think much, much more is needed.

We need to have a national conversation about this.

Almost none of the progressive domestic programs and reforms that the Democratic candidates are discussing right now, and will be debating as soon as the debate starts for the presidential nomination, can take actually place if by then John Bolton has started a war with Iran. Because war with Iran will be much, much more devastating than war with Iraq was. And war with Iraq, we’re still living with the repercussions of that disastrous foreign policy decision.

So Trita Parsi, the Defense Secretary Patrick Shanahan, former Boeing executive for decades, said that deployment was made of the military carrier strike group and bomber task force because of a credible threat by Iranian regime forces.

Axios reporting the threat is based on information passed on from Israel. What is Israel’s interest in this?

Well, the Israelis have been pushing for a military confrontation with Iran for quite some time as well, and certainly Bibi Netanyahu has prided himself as being the foremost advocate of a military confrontation with Iran. He just stated a couple of weeks ago outside of the Warsaw conference that what is bringing the Arab states—and what he’s referring to essentially is Saudi Arabia and the UAE—together with Israel is a common interest for war with Iran.

Now, of course, they don’t have the capacity of taking on Iran on their own, so the pressure is on the United States to start a war with Iran and essentially fight it for them. And as former Secretary of Defense Bob Gates said, the Saudis want to fight the Iranians to the last American.” What is also interesting about this Axios report is that it’s actually not intelligence that was being given to the United States about what the Iranians are doing, but rather an analysis of what the Iranians may be doing in the region. So we are now in a situation in which John Bolton wants to use an Israeli analysis written by some analyst in Israel about what Iran may do as the smoking gun to start his war. This is not only a repeat of the Iraq scenario, but it’s actually a farcical version of the Iraq war scenario.

We want to thank you, Trita Parsi, for joining us. Former president of the National Iranian American Council. Recent book—_Losing an Enemy: Obama, Iran, and the Triumph of Diplomacy.