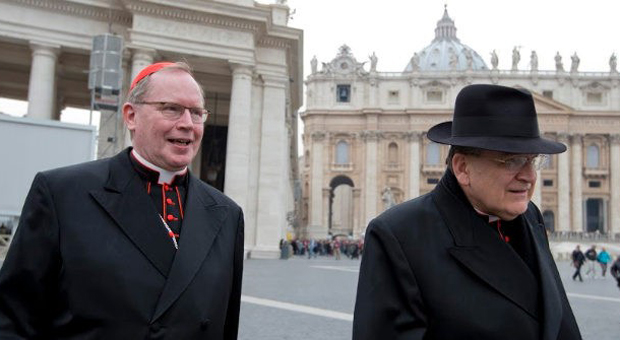 Conservatives priests gather in Italy to protest globalism A notable number of Catholic conservatives from around the globe has gathered in Rome this week to oppose “global, one-world order,” according to reports.

The meeting took place at the Pontifical University of Saint Thomas Aquinas where prominent prelates and lay leaders me for the annual Rome Life Forum, taking place close to Italy’s yearly March for Life.

Both Burke and Brandmüller are the last remaining “dubia” Cardinals, who presented Pope Francis with five questions regarding Catholic teaching after the apostolic exhortation Amoris Laetitia (“The Joy of Love”) publication in 2016.

But Francis refused to respond to the Cardinals, leading many critics to suggest the Pontiff prefers ambiguity to clear teaching.

Burke will address the assembly on the topic of “filial piety and national patriotism as essential virtues of citizens of heaven at work on earth,” on Thursday.Francis has been vocal on his criticisms of nationalist and populist movements.

In January, he blamed the shortcomings of globalization on the rapid rise of nationalism. Francis did not highlight any specific countries of political parties but reflected on national policies favoring “quick partisan consensus” over patient efforts for the common good.

“The common good has become global, and nations must associate,” the pope told members of the Pontifical Academy.“

Unfortunately, we have before our eyes situations in which some nation states carry out their relations in a spirit of opposition rather than cooperation,” the pontiff said.

The common good has become global, and nations must associate for their benefit,” the pope said.

Last year, the pope Pope Francis has called on migrants to flood the United States and other Western nations while urging world leaders to “forget about national security” concerns as immigrant’s needs is “more important” than borders.