The Australian federal police have raided the home of News Corp Australia journalist Annika Smethurst investigating the publication of a leaked plan to allow government spying on Australians.

On Tuesday police executed a warrant investigating the “alleged publishing of information classified as an official secret” which they said had the potential to undermine Australia’s national security.

The warrant from an ACT magistrate gave police authority to search the home, computer and mobile phone of the News Corp Sunday titles’ political editor.

The raid prompted outrage from News Corp Australia, which labelled it a “dangerous act of intimidation” targeted at public interest reporting.

In April 2018 Smethurst reported that the heads of the defence and home affairs ministries had discussed draconian new powers to allow the Australian Signals Directorate to spy on Australian citizens for the first time.

Under the mooted plan, spies would be allowed to secretly access emails, bank accounts and text messages with approval from the defence and home affairs ministers.

Under current laws the Australian federal police and domestic spy agency Asio have the power to investigate Australians with a warrant and seek technical advice from ASD, which is not permitted to produce intelligence on Australians.

In a statement the AFP confirmed it had executed a search warrant at a residence in an ACT suburb on Tuesday.

“The matter relates to an investigation into the alleged unauthorised disclosure of national security information that was referred to the AFP,” the agency said in a statement.

“This warrant relates to the alleged publishing of information classified as an official secret, which is an extremely serious matter that has the potential to undermine Australia’s national security. 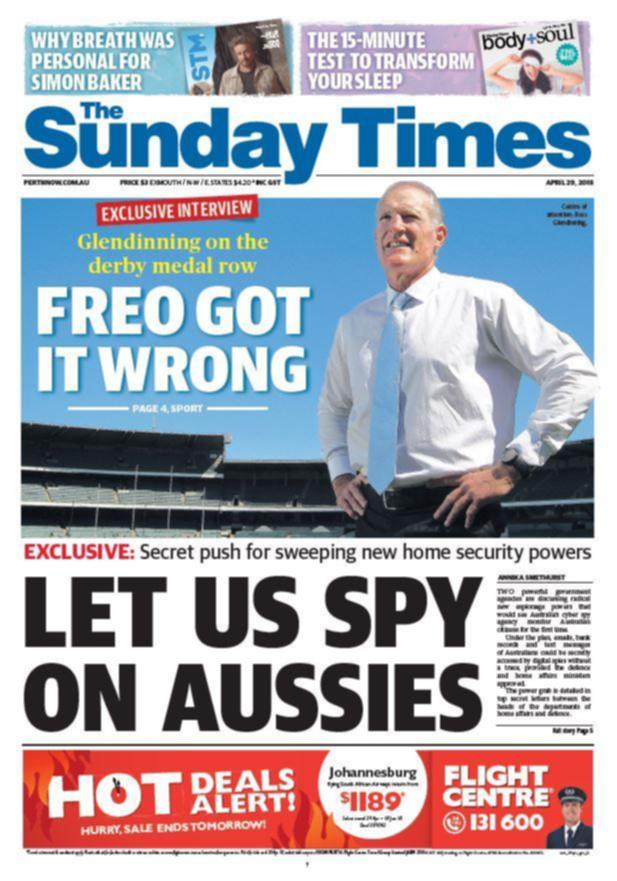 In a statement News Corp Australia described the raid as “outrageous and heavy-handed”.

Smethurst was preparing to leave for work when the raid was executed on Tuesday morning, the Daily Telegraph reported. The AFP searched her home, computers and mobile phones as part of an investigation over the source of Smethurst’s 2018 story detailing government plans to grant the Australian Signals Directorate spying and hacking powers over Australian citizens.

The AFP confirmed the raid in a media release, writing: “The Australian Federal Police (AFP) can confirm it has executed a search warrant at a residence in the ACT suburb of Kingston today.

“The matter relates to an investigation into the alleged unauthorised disclosure of national security information that was referred to the AFP.

“No arrests are expected today as a result of this activity.”

In a statement, a News Corp Australia spokesperson said: “The Australian public’s right to know information about government laws that could impact their lives is of fundamental importance in our society.

“This raid demonstrates a dangerous act of intimidation towards those committed to telling uncomfortable truths. The raid was outrageous and heavy handed.

“News Corp Australia has expressed the most serious concerns about the willingness of governments to undermine the Australian public’s right to know about important decisions Governments are making that can and will impact ordinary Australian citizens.

“What’s gone on this morning sends clear and dangerous signals to journalists and newsrooms across Australia.  This will chill public interest reporting.”

The MEAA said in its statement on the raids: “This morning’s raid by Federal Police on the home of a respected Canberra Press Gallery journalist is an outrageous attack on press freedom that seeks to punish a journalist for reporting a legitimate news story that was clearly in the public interest.

“The raid is yet another example of the heavy hand of government seeking to: withhold important information from the public, harass and intimidate journalists who are reporting responsibly to the Australian community; and persecute and prosecute whistleblowers who reveal matters of concern, including exposing any information or activity that is against the public interest.

“MEAA notes that the government has already rushed through deeply flawed anti-encryption legislation on the last sitting day of the Parliament in 2018. The new law seeks to “break”, or decrypt, the encrypted communications of ordinary citizens. MEAA has already warned that, based on past experience, Australian  governments and their agencies have little regard for press freedom and there is every likelihood that the powers to be used over encrypted communications can be misused — either to identify a whistleblower or pursue a journalist for a story the government does not like.

Marcus Strom, MEAA president said: “Yet again, we have an example of a government aiming to punish those who have brought to light vital information. Australians are entitled to know what their governments do in their name. That clearly includes plans by government agencies to digitally spy on Australians by hacking into our emails, bank accounts and text messages.

“It is an outrage that more than a year after the story was reported in April 2018 but just days after the federal election result, the Federal Police are now raiding a journalist’s home in order to seize documents, computers and a mobile phone in order to track down the source,” Strom said.

“MEAA has catalogued, in our annual press freedom report, the steady encroachment of government into muzzling the media and pursuing whistleblowers for daring to bring to light legitimate news stories that embarrass the government of the day. But when you go after whistleblowers you are going after journalism. When you seek to muzzle the media and deny their right to subject the powerful to scrutiny, you are attacking democracy and the public’s right to know,” Strom concluded.

“The Australian public’s right to know information about government laws that could impact their lives is of fundamental importance in our society,” it said.

“This raid demonstrates a dangerous act of intimidation towards those committed to telling uncomfortable truths.”

News Corp Australia said it had “expressed the most serious concerns” about erosion of the Australian public’s right to know about government decisions that “can and will impact ordinary Australian citizens”.

“What’s gone on this morning sends clear and dangerous signals to journalists and newsrooms across Australia. This will chill public interest reporting.”

“We fear that the powers given to the AFP to seize and search Annika Smethurst’s digital footprint represent a considerable risk to bold Australians who choose to expose wrongdoing in the public services,” he said.

“This is a gross abuse of national security powers – using them to reinforce a culture of secrecy and lack of accountability in our law enforcement apparatus.”

Australia also has offences which make it unlawful for non-commonwealth officers to communicate or deal with information that has a security classification of secret or top secret or “damages the security or defence of Australia”.

Journalists have a defence of dealing with protected information where they “reasonably believe” it is in the public interest to do so, but the media union has warned the law still effectively criminalises journalism.