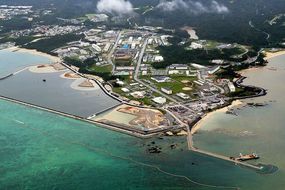 A mag 6.1 Japan, is the 38th straight major quake to rock the Pacific Ring Of Fire with the sequence going way back to the beginning of May: Mag 4.9 hits SoCal

A magnitude 6.1 – 169km NW of Naze, Japan and an earthquake measured at a verified magnitude of 5.8 struck northern Mindanao in the Philippines archipelago early on Saturday local time, the U.S. Geological Survey said (USGS), ensuring the Pacific Ring Of Fire keeps on rockin’

An earthquake of magnitude 6.1 struck north of Japan’s islands of Okinawa on Saturday, the United States Geological Survey said.

In the last 24 hours, around 1,600 quakes have rumbled in the Ridgecrest area of Southern California, which is consistent with the previous day, however, one of them was a magnitude 4.9, the strongest there for a few days.

According to the La Times, in the past 10 days, there have been 649 earthquakes of magnitude 3.0 or greater centred nearby.
The aftershock was powerful enough to cause strong shaking — or level 6 on the Modified Mercalli Intensity Scale — at the unpopulated epicentre.

Moderate shaking, or level 5, was felt in Ridgecrest.

The quake was strong enough to wake some people in downtown Los Angeles and was felt as far away as Bakersfield, Death Valley and Orange County.

Further up the Western Coast of the US, Washington State yesterday was rocked by a mag 4.6 SSW of Three Lakes, and a mag 3.5, W of Monroe.