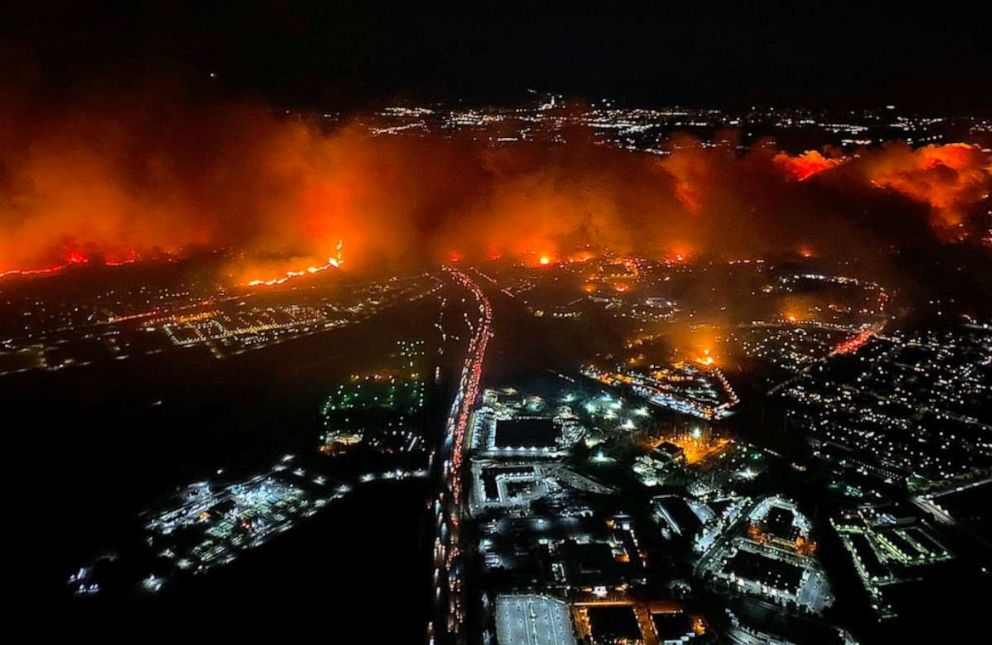 Wildfires from the Saddleridge Fire in northern California are seen from the air, Oct. 10 2019.

The Nefarious NWO Agenda Exposes Itself In Satanic Detail

Outright Lied to the Residents About the Power Shutdown

WHAT is going on in California?

State of the Nation

First of all, let’s be very clear: what PG&E and the California State Government are doing to the residents has NEVER happened before.

Shutting down power to nearly 3,000,000 people throughout any state has never happened before—ANYWHERE!

PG&Egate: Why is California shutting down power to nearly 3 million residents?

Since when is shutting off the power as a pre-emptive measure to avoid wildfires from spreading a justifiable pretext? ! Especially when PG&E was falsely blamed for the wildfire destruction in the first place.

This Government-Corporate crime wave has been memed PG&Egate because of the sheer depth and breadth of the criminal conspiracy that was necessary for it to get this far.

How, pray tell, was such a criminally negligent scheme allowed to get out of the insane mind that conjured it up?

We’ll tell you how: The ever-intensifying catastrophic firestorms, which have been meticulously geoengineered in California over the past several years, are actually manmade and produced by various means.  These include multiple triggers that are used to ignite the explosive conditions are that are painstakingly created between the wildfire seasons.  A partial list of those hidden triggers and conducive causes can be found here: California Wildfires Geoengineered & DEW Attacks.

In this deliberate way, the real perps are sufficiently terrorizing the residents with annual firestorms in order to forcefully move them off their ancestral lands, specifically throughout the conservative red counties of California.

This ongoing series of clandestine black operations is all about purposeful and well-planned DERACINATION.

Not only are the governmental and corporate perpetrators committing a targeted genocide with these false flag attacks (“false flag” because they are incorrectly blamed on Mother Nature), they are then stealing the coveted lands wherever, whenever and however they can.

The co-conspirators well know that nothing works so effectively than to scare the residents off their properties via a surreptitious implementation plan of deracination.

“California is using the “Firegeddon” meme to fear-monger,
and terrorize red county residents off their land.  Yes,
there’s much more to this power shutdown, but that’s
the gist of it.”

First of all, it’s imperative to understand who is really starting and spreading all the devastating CA firestorms over the past decade. As follows:

The new normal of raging wildfires — during two wildfire seasons every year — are being stealthily geoengineered by the New World Order globalist cabal. As follows:

CALIFORNIA FIRESTORMS: Who’s geoengineering the statewide conflagration and why?

The fires have not even started yet; the winds have yet to blow; and PG&E has been ordered by the government to shut down the power to millions across California.

The UN Agendas are a major driver behind so much false flag, weaponized weather terrorism in California. The primary fake enviro paradigms being used to justify so much manufactured geo-terrorism and traumatizing power shutdowns are Agenda 21 and the 2030 Agenda for Sustainable Development. As follows:

However, there are really multiple globalist goals and nefarious NWO purposes undergirding these highly staged Jade Helm-like events. As follows:

CALIFORNIA FIRESTORMS GEOENGINEERED: Here’s why and who’s doing it

Another reason why the control freaks at the very top of the food chain use these unrelenting acts of geoterrorism and power shutdowns is to manufacture consent.

By furtively using the Hegelian Dialectic MO — Problem ~ Reaction ~ Solution — they hope to stampede the citizenry into the pen of compliance with regard to many draconian measures that are on the horizon.

The power elite especially want to strip Americans of their right to firearms, especially for when the lights really do go out. Those predatory capitalists, who are quite busy right now fleecing pensioners of their retirement funds, know that We the People know who they are. Hence, draconian laws are being quietly legislated in statehouses across the USA which are taking away liberties, trampling rights, and removing freedoms such as the inviolable Freedom of Speech.

However, the perps at the peak of the pinnacle of the world power pyramid are well aware that the only way to do this without a full-blown “French Revolution” scenario is to:

Now, take a very close look at the preceding map of the power shutdown area in Northern California.

This particular geographic area covers the most powerful region in the realm of Big Tech and Big Social Media IN THE WHOLE WORLD.

Actually, it could be argued that Silicon Valley is the most powerful and influential area on the planet because of the global reach and overwhelming influence it now enjoys.

Essentially, what The Powers That Be are telling the “Sultans of Silicon Valley” is that they can be shut down in a flash…and not even necessarily in a California firestorm flash. The government can close down their Internet operations based on an entirely false pretext … like they are doing at this very moment—WOW!

KEY POINT: Now the reader knows why this complex criminal conspiracy was designed to systematically disem POWER the people (see map below). However, there’s a much bigger goal here as explained in the “Conclusion”.

Climate Change chaos, the Extinction Rebellion, the Impeachment fiasco, GRETAgate, Mideast oil tanker attacks and the Democrat 2020 Freak Show are all being staged to distract, divert and misdirect all day long, every day. 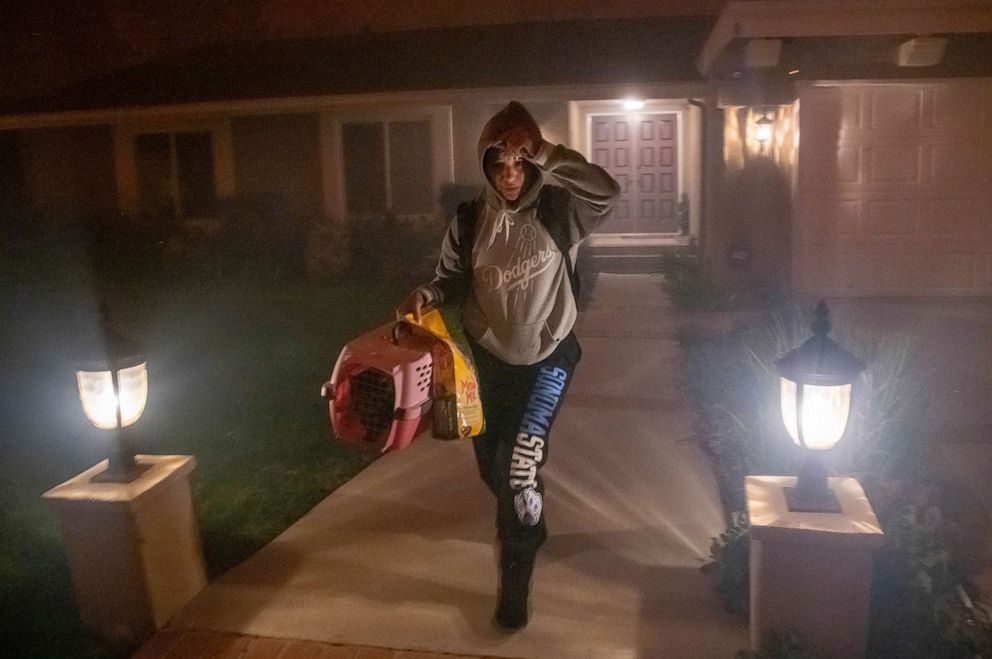 A woman evacuates her home with her cat as the Saddleridge fire threatens homes in Granada Hills, Calif., Oct. 11, 2019.

The Powers That Be (TPTB) are cognizant of the mathematical certainty of the upcoming market crash and economic collapse.

They know there’s no stopping it, so they continually contrive so much drama to distract the populace from the grim financial and economic realities shaping up everywhere.

Of course, the power elite have a post-collapse plan that represents the capstone of their New World Order agenda. That malevolent scheme not only includes the establishment of a One World Government headquartered in Jerusalem, it also calls for the complete takeover of all natural resources on the planet, as well as exerting total control over the world’s weather.

The International Banking Cartel has always thrown their financial support to the Hollywood moguls and Sultans of Silicon Valley in anticipation of this final phase of exercising dominion over the entire planetary civilization. That’s why California is constantly targeted with apocalyptic events like Firegeddon. The Black Nobility bansksters have been planning this takeover for centuries and will not let anything stand in their way.

Apparently, the wealthy elites seriously underestimated the raw people power that is concentrating locally and coalescing globally by the day against their highly misguided schemes. The Internet, alone, has graphically exposed TPTB as an incorrigible cabal of criminally insane psychopaths who are shortly due their comeuppance.

From this point on, the NWO crazymakers will always take advantage of every single disaster they can in order to advance their satanic agenda at every turn. The key point is that they will engineer disasters to further terrorize the American people, especially when natural ones are expected anywhere in the 50 states.  They already hijack any natural disaster they can get away with.  And, they will not let a single disaster go to waste whether natural or manmade.

Bottom Line: This power shutdown has been brazenly carried out primarily to put all the blame on PG&E.  The globalists and geoengineers have been utilizing several techniques and tools to both start and spread these apocalyptic firestorms.  By holding PG&E alone responsible for the successive calamities, those geoengineering technologies and arson weapons conveniently escape detection by the unsuspecting public.