Less than 30 minutes after President Trump tweeted early Friday, “Our soldiers have left and are leaving Syria for other places, then…COMING HOME!” — Defense Secretary Mark Esper confirmed prior reports that the Pentagon will indeed leave behind a small military presence to include “mechanized forces” at “the oil fields”.

As we reported yesterday per a WSJ report, the plan is likely to include some 500 troops stationed at the major oil fields east of the Euphrates, and sending dozens of battle tanks and other equipment to protect them. So perhaps merely some troops are actually coming home, while the tanks are moving in.

To be expected, the justification Esper gave is focused on the perpetual “threat” of a reconstituted Islamic State. “We are now taking some actions… to strengthen our position at Deir al zor, to ensure that we can deny ISIS access to the oil fields,” Esper told reporters at a briefing. “We are reinforcing that position, it will include some mechanized forces,” Esper said. Like Osama bin Laden after 9/11, ISIS is the bogeyman that keeps on giving, conveniently used as an excuse for the Pentagon to never leave the region, apparently.

Trump is clearly bending to the demands of his generals, who not only want to leave the Syrian Kurds a major bargaining chip to play in dealing with Assad, but continued control over Syria’s domestic energy resources can be used by Washington as potential leverage in future negotiations over Syria.

It’s also perhaps to deflect the growing mainstream media and Democratic criticism (along with some key Republican allies) that Trump has supposedly “handed the Middle East to Russia”. It further fits with Trump’s Thursday tweet, declaring:

“We will NEVER let a reconstituted ISIS have those fields!”

Like with prior declarations of Trump expressing desire to leave Syria in past years, notably in early 2018, the immediate fierce bipartisan backlash in both Congress and the media (not to mention the ‘deep state’) typically results in a slow walk back of the policy, eventually to the point that nothing actually changes regarding Syria. 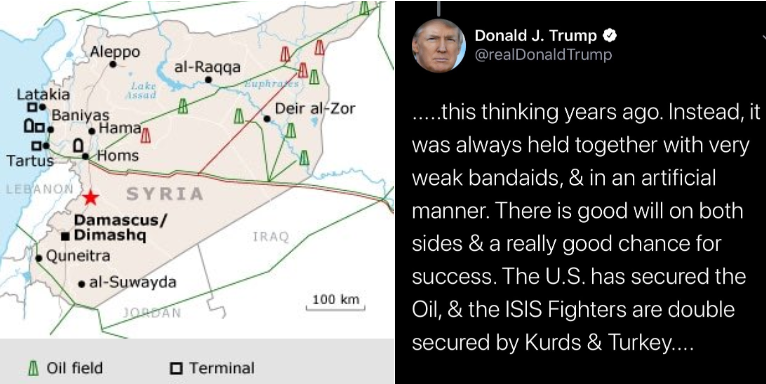 Of this latest backlash and Trump’s “softening” the original withdrawal plans, Reuters describes:

Trump has been softening his pullout plans for Syria after a backlash from Congress, including among key Republicans, who say he enabled a long-threatened Turkish incursion against Kurdish forces in Syria who had been America’s top allies in the battle against Islamic State.

And yet all of this is happening as Russia is actually bolstering its forces in Syria, specifically sending about 300 new military police to the northeast, taking over areas which had a prior US special forces presence.

Early this week Kremlin officials condemned looming US plans to ‘secure’ the oil fields, saying Syria’s natural resources belong only to the legitimate government in Damascus.

So again it appears that after all of the hype, and constant statements of “we’re bringing the troops home” — we are left with a few hundred US troops shifted to western Iraq, and tanks going in.