(Bloomberg) — Forty years ago, scientists from 50 nations converged on Geneva to discuss what was then called the “CO2-climate problem.” At the time, with reliance on fossil fuels having helped trigger the 1979 oil crisis, they predicted global warming would eventually become a major environmental challenge.

The scientists got to work, building a strategy on how to attack the problem and laying the groundwork for the Intergovernmental Panel on Climate Change, the world’s preeminent body of climate scientists. Their goal was to get ahead of the problem before it was too late. But after a fast start, the fossil fuel industry, politics and the prioritization of economic growth over planetary health slowed them down.

Now, four decades later, a larger group of scientists is sounding another, much more urgent alarm.

More than 11,000 experts from around the world are calling for a critical addition to the main strategy of dumping fossil fuels for renewable energy: there needs to be far fewer humans on the planet.

“We declare, with more than 11,000 scientist signatories from around the world, clearly and unequivocally that planet Earth is facing a climate emergency,” the scientists wrote in a stark warning published Tuesday in the journal BioScience.

While warnings about the consequences of unchecked climate change have become so commonplace as to inure the average news consumer, this latest communique is exceptionally significant given the data that accompanies it.

When absorbed in sequence, the charts lay out a devastating trend for planetary health. From meat consumption, greenhouse gas emissions and ice loss to sea-level rise and extreme weather events, they lay out a grim portrait of 40 years of squandered opportunities.

The scientists make specific calls for policymakers to quickly implement systemic change to energy, food, and economic policies. But they go one step further, into the politically fraught territory of population control. It “must be stabilized—and, ideally, gradually reduced—within a framework that ensures social integrity,” they write.

The problem is enormous, yet the signatories still manage to strike an upbeat tone. For all the lost chances, progress is being made, they contend.

“We are encouraged by a recent surge of concern,” the letter states. “Governmental bodies are making climate emergency declarations. Schoolchildren are striking. Ecocide lawsuits are proceeding in the courts. Grassroots citizen movements are demanding change, and many countries, states and provinces, cities, and businesses are responding.”

The report, however, comes one day after U.S. President Donald Trump began the formal procedure of withdrawing America from the Paris climate accord. 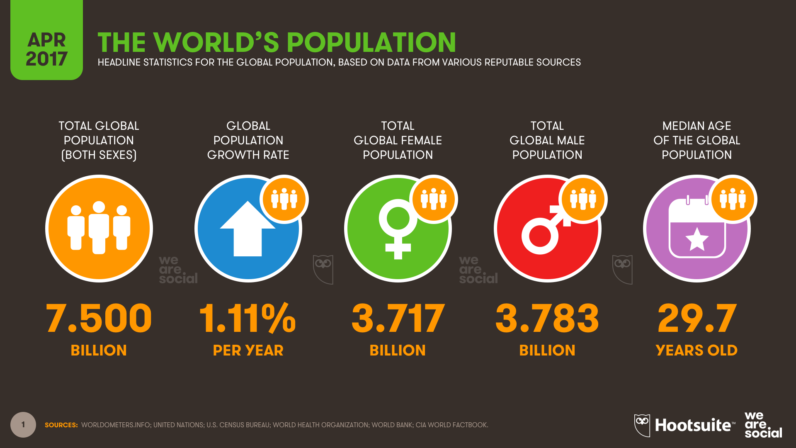 Just seven countries account for half of the world’s population:

Believe it or not, the world’s population has doubled only 31½ times since the first human couple appeared on earth. This gives 6,500 years. You can work it out for yourself on your own calculator.

A Maori lady died in New Zealand … at the age of 112, leaving 450 descendants

A lecturer on evolution once told me that there were never just two people because a whole population would have evolved. If that were so, then that would mean that the human population has doubled far less than 31½ times. But, to maximize believability of the evolutionary scenario, let’s say that the population started with only four people a million years ago. This would mean that the average time that the world’s population took to double was about 33,000 years (30.5 doublings). So it would have taken that many years to get to eight people, and another 33,000 years before the world’s population rose to 16. That is rather slow growth—by comparison, a Maori lady died in New Zealand in December 1984 at the age of 112, leaving 450 descendants.

Population growth is increasing currently at a rate of approximately 1.8% per annum (World Book Encyclopaedia), or doubling every 39 years.

Even if the average time that the population doubled in the past was as slow as once every thousand years (that is one twenty-fifth of the present growth rate), this would put the first pair of humans on Earth only 31,500 years ago.

The world’s population was approximately 600 million in the year 1650 and increased to about 2,400 million by 1950. This means that it would have doubled twice in 300 years, at an average rate of once every 150 years.

Thanks to the Bible, we can trace the lineages of Jews and Arabs right back to the same patriarch, Abraham, who was born about 2167 BC and had six sons. His first son, Ishmael, was the father of the Arabs, and his second son, Isaac, was the father of Jacob, later called Israel, from whose twelve sons came the 12 tribes of Israel, better known as the Jews.

The World Book of Knowledge says that there are approximately 200 million Arabs in the world and about 18 million Jews.

This means that since Abraham’s time, his descendants through only two sons have doubled roughly 28 times at an average rate of about once every 150 years.

Now the Jewish people have undergone a tremendous amount of persecution and slaughter over the centuries. Hitler murdered over six million in concentration camps alone during the Second World War.

They must have lost many members through disease, infant mortality and starvation over the centuries just as other people groups have. Their history is replete with stories of battles and loss of life because of wars. Yet we find that their numbers have doubled a minimum of 23 times, at an average rate of once every 182 years.

We can calculate the rate of population growth starting from about 4,500 years ago, when, from the historical details found in the Bible, Noah and his family—eight in total—survived the deluge.

That population has to double 29½ times to get the current world’s population of six and a half billion, at an average doubling rate of once every 152 years. Interesting, isn’t it? The Bible’s timeframe of history fits the data.