By MARLENE LENTHANG and LAUREN FRUEN FOR DAILYMAIL.COM

Blizzards are battering the U.S. from coast to coast, triggering devastating flight cancellations and delays on the biggest travel holiday of the year – as 50 million people across the country are placed under a winter weather alert.

Two winter storms swirling over the country have already claimed three lives. Two children were found dead and another was missing in Arizona on Saturday after a car they were in got stuck while crossing a storm-swollen creek outside Phoenix.

A 37-year-old man was killed in a car accident near Cavour, South Dakota early Friday morning after the pickup truck he was in lost control on the icy road, fell into a ditch and rolled over.

The National Weather Service warned that Sunday’s forecast will bring heavy mountain snow and rain in California, and heavy snow and blizzard conditions from the Upper Midwest to the Northeast. In the Midwest the powerful storm will bring damaging winds and large hail. A tornado watch is in affect for parts of Texas, Louisiana, and Arkansas.

So far the storms have cancelled over 600 flights within, into, or out of the U.S. and over 4,000 were delayed as of Sunday afternoon, during the busiest travel holiday of the year. 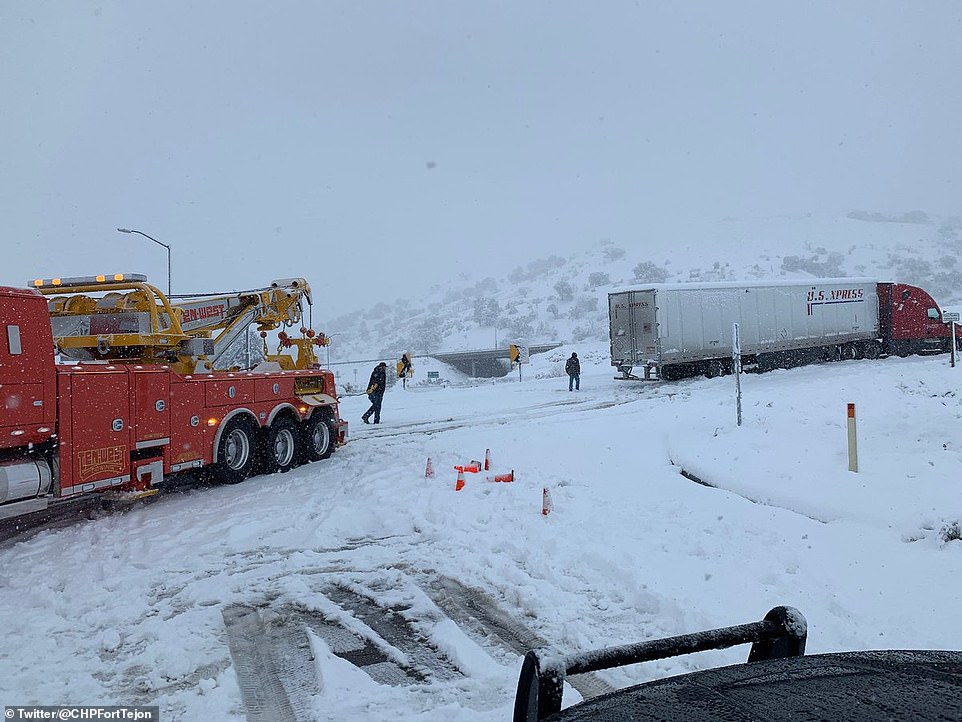 Three people have died in dangerous winter storms battering the U.S. during the post-Thanksgiving weekend, as 50 million people across the country are under winter weather alert. Massive snowfall pictured about in Fort Tejon, California 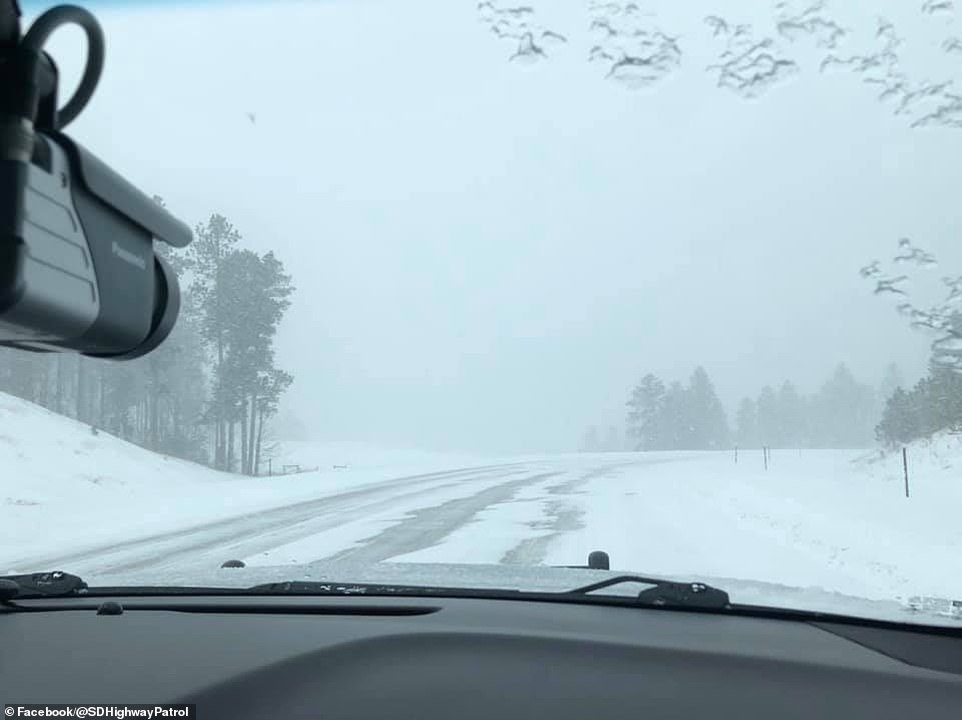 The South Dakota Highway Patrol shared this picture showing Highway 14A between Sturgis and Deadwood completely covered in Snow in the Black Hills area, urging locals to ‘Please stay home, don’t risk it’ 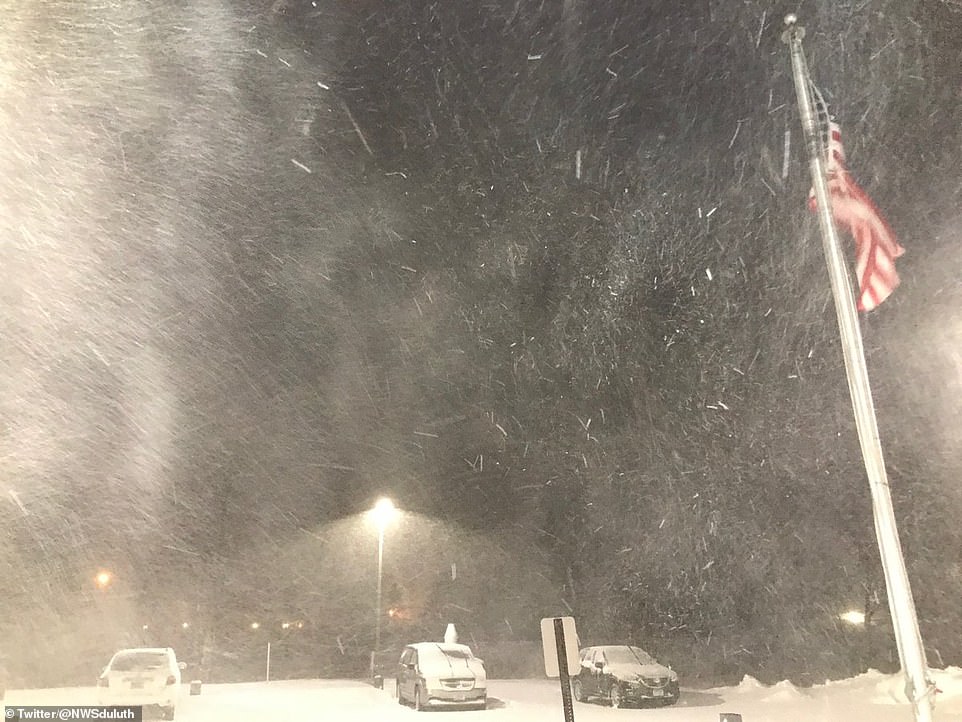 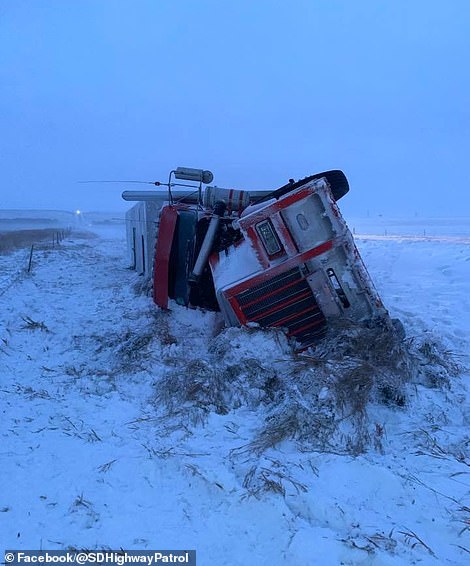 A tractor truck carrying cattle rolled over onto its side while driving in the dangerously icy roads In Buffalo County, South Dakota on Saturday. The driver was unharmed in the incident. 45 of the 47 cows on board survived

The National Weather Service shared this snowfall forecast map revealing heavy snowfall will impact Western states, the Upper Midwest and the Northeast, with some areas seeing between four to six inches of snow, through Wednesday 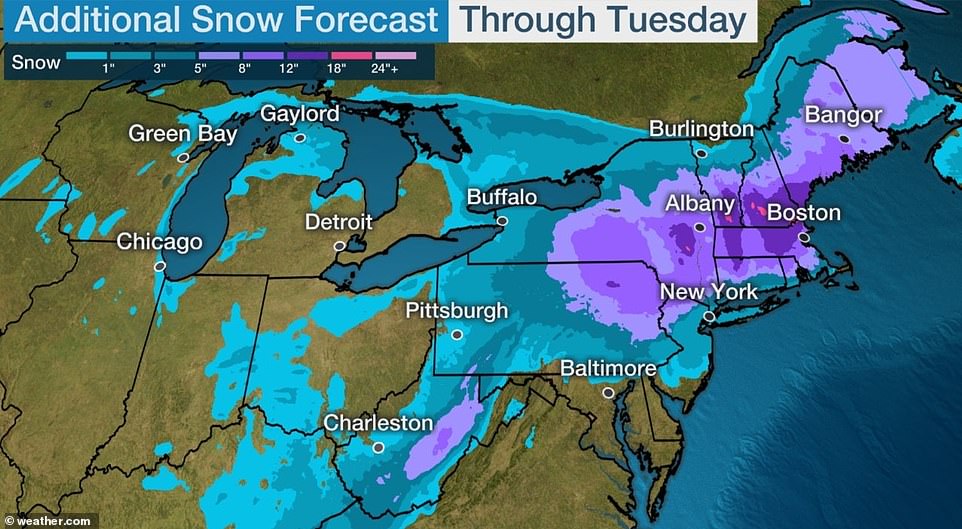 This map shows the snow forecast in the Northeast, hitting New York through Maine hard with five to 12 inches of snow

This year AAA estimated nearly 55million people traveled via roads, rails, and plane for holiday travel from Wednesday to Sunday, meaning the wintry weather will abrupt the travel plans for millions of people.

The storm hitting the Northeast has been named Winter Storm Ezekiel by the Weather Channel and is forecast to bring up to a foot of snow, according to NWS.

New York is expected to see two inches of snowfall each hour on Sunday and Monday.  Freezing rain, sleet and snow drizzled over Pennsylvania, New Jersey and New York on Sunday.

A whopping 48 inches of snowfall was recorded Sunday evening in California and Utah at the Big Bear Resort and Snowbasin Resort up in the mountains, respectively. 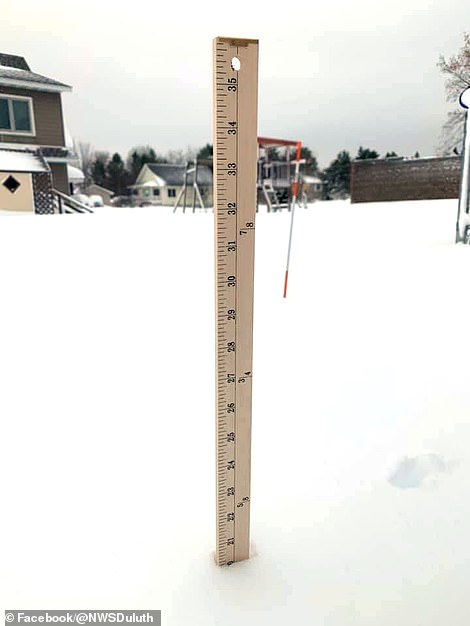 On Sunday 20 inches of snowfall was recorded in Gary New Duluth, Minnesota

To brace for the storm New York Gov. Andrew Cuomo placed the National Guard on standby and the state’s emergency operations center on ‘enhanced monitoring mode’.

Massachusetts also issued an ‘awareness statement’ warning 8 to 12 inches of snow over the state interior and up to a whopping 17 inches near the Berkshires.

The heaviest snow is forecast to hit the western Catskills reaching about two feet. New York City and Long Island are forecast to receive one to four inches. The area around Albany could see 12 to 18 inches.

‘The amount of the population under a warning, advisory or watch is extensive — it’s in the millions,’ Meteorologist Brian Hurley at the National Weather Service’s Weather Prediction Center said to the Washington Post.

The children who died in devastating floods in Arizona were first reported missing late Friday after a vehicle got stuck in Tonto Creek near Tonto Basin, northeast of Phoenix, the Gila County Sheriff’s Office said in a statement.

Rescue workers in helicopters successfully reached four other children and an adult who were stranded on an island in the creek and a second adult who was on the shore. A search was launched for the three missing children.

Two of those children, a boy and a girl, both about five-years-old, were found dead on Saturday about three miles downstream from where the vehicle became submerged, said Virgil Dodd, a sheriff spokesman.

About 30 first responders were still searching for the missing girl. ‘We hope we find the last one and bring her to safety,’ Dodd said.

The two adults were parents of four of the seven children involved in the incident. Dodd said the group was believed to be from out of town, but no details were known.

The group was in the area for a family reunion during the Thanksgiving holiday, the KPNX news channel reported. 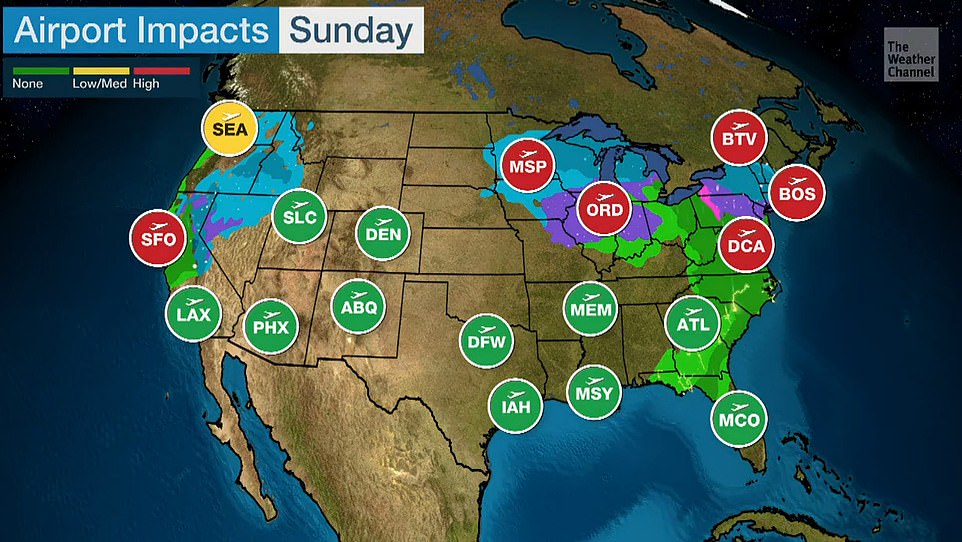 Airlines for America, the airline industry’s trade group, expects 31.6 million passengers during what could be the busiest day ever recorded for American air travel on Sunday. The map above shows the impact to travel across the US 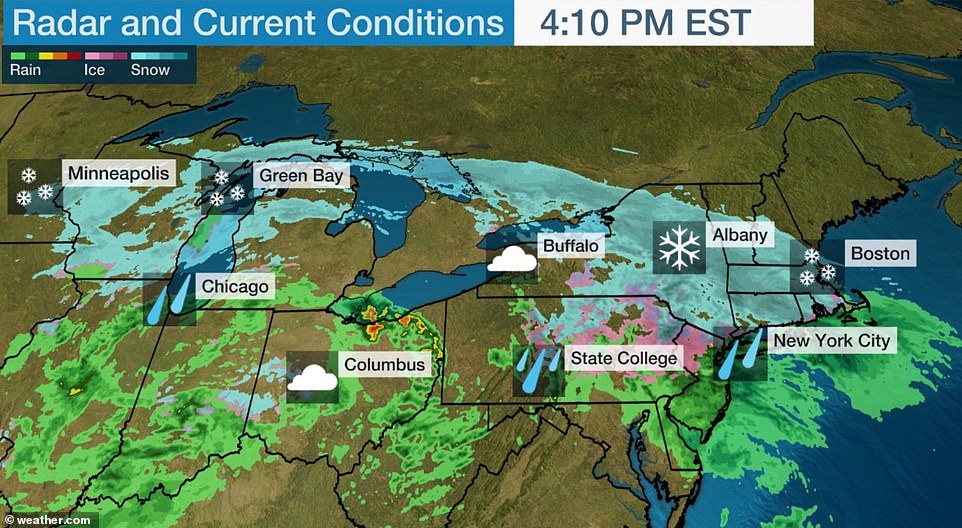 Top snow totals as of Sunday

The city of Tusayan in Arizona declared a state of emergency due to nearly two feet of snow and lack of electricity on Friday. Tusayan is located near the Grand Canyon National Park where over a foot of powdery snow was measured as of Sunday.

More than 1,000 people were left with no heat of power since early Friday, leading a shelter to be set up in the Grand Canyon National Park in Arizona.

‘We are working to arrange emergency shelter at the National Park, in buses, and at other locations,’ Mayor Craig Sanderson said in a written statement. ‘We are working with the County Emergency Management team, Arizona Department of Transportation, (Arizona Public Service) and the National Park Service with a priority on clearing roads.’

California saw similar outages amid intense wind and rain. In parts of Southern California were left in the dark, according to Southern California Edison due to storm related issues such as strong winds and snow topped trees downing wires. The company said it would pass out firewood to affected residents.

The bodies of two children were found Saturday after a truck they were in was swept away while attempting to cross a runoff-swollen creek in the Tonto National Forest in Arizona. About 30 first responders were still searching for a missing girl 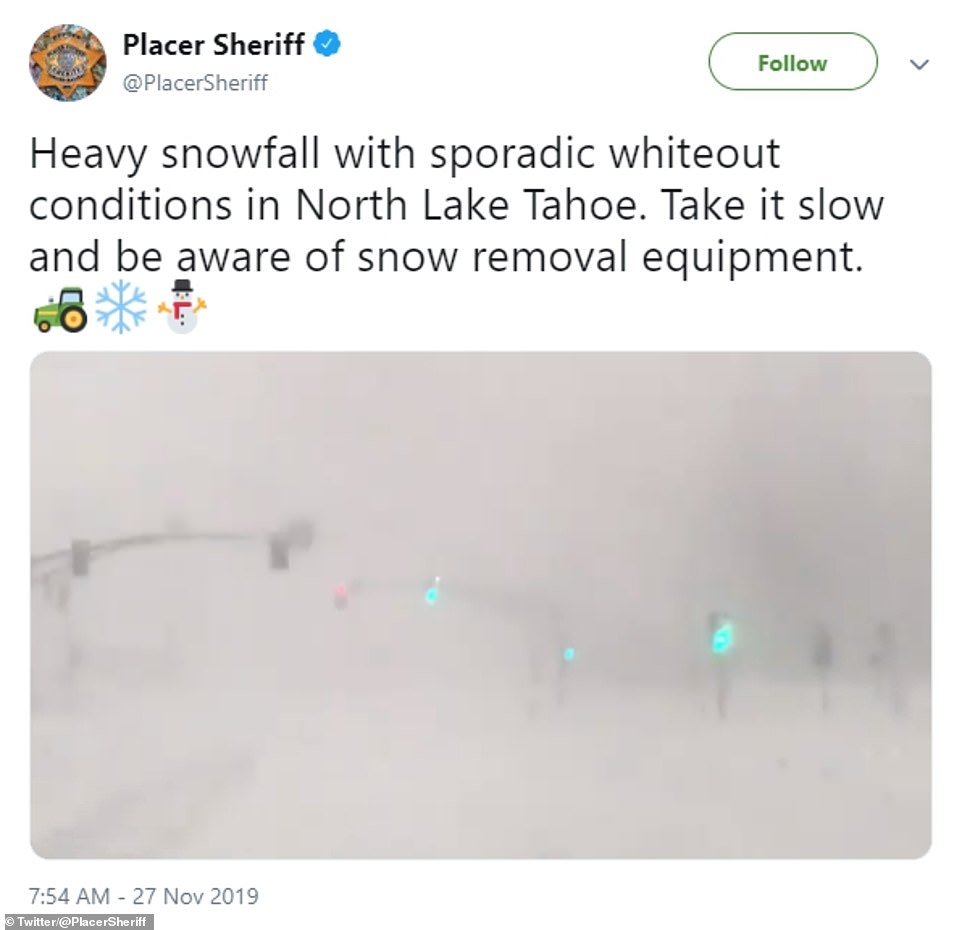 Blizzard conditions created a white out in North Lake Tahoe in California, leading authorities to warn locals to stay indoors 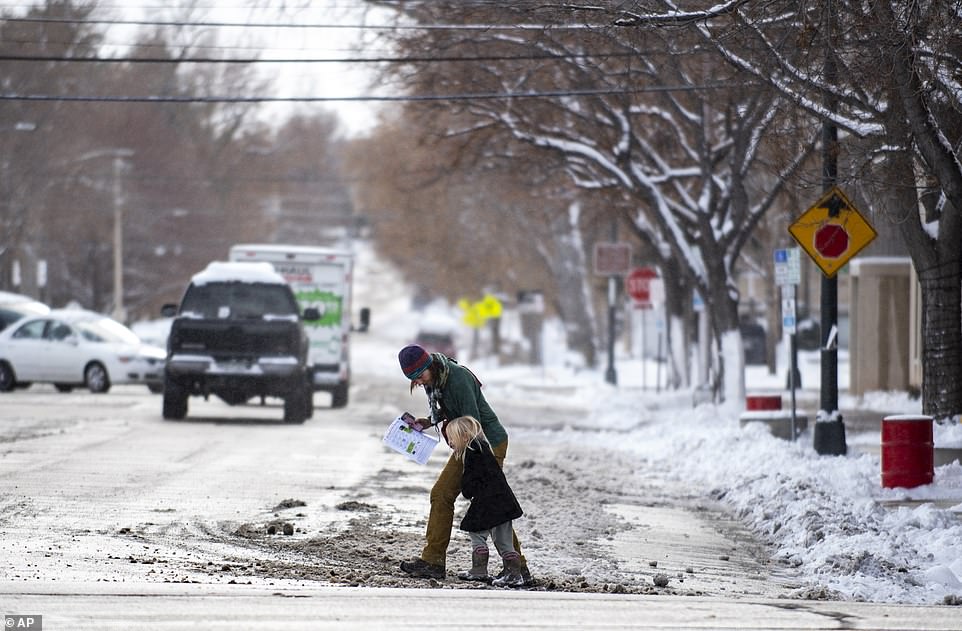 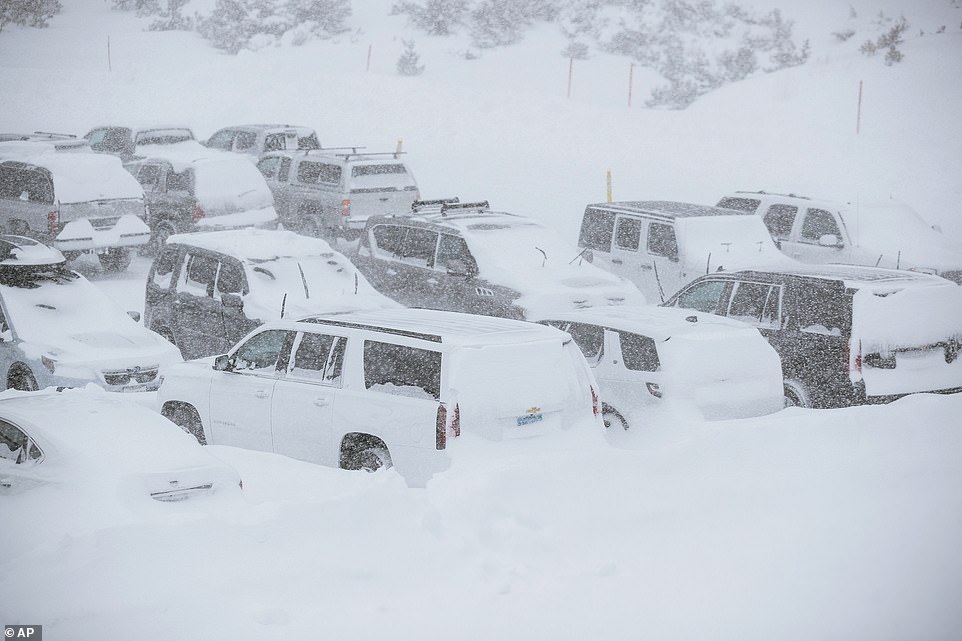 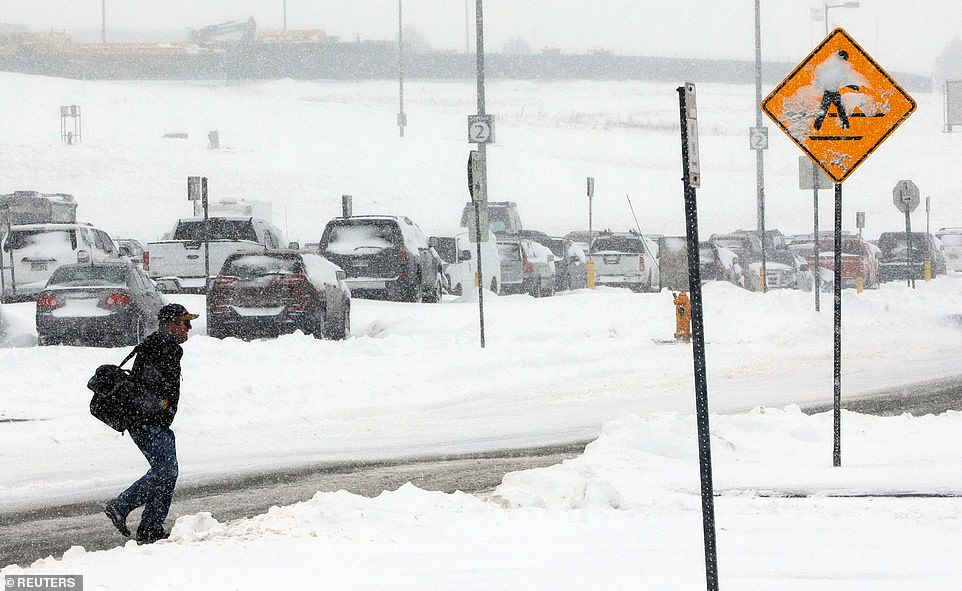 A traveler makes his way to a shuttle stop after a pre-Thanksgiving holiday snowstorm caused more than 460 flight cancellations at Denver International Airport, Colorado on Tuesday