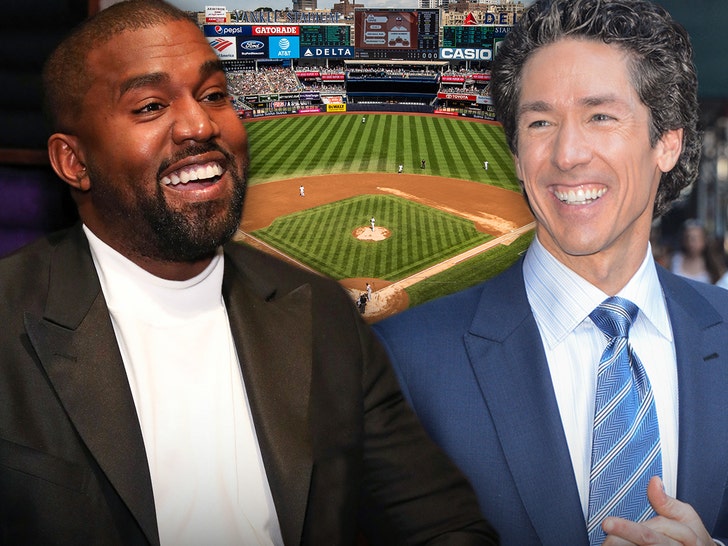 Kanye West is going from the big stage at Joel Osteen‘s Lakewood Church to a truly massive one — this time they’ll be teaming up to fill Yankee Stadium to the brim … TMZ has learned.
Sources close to Kanye tell us … Ye and Joel will take center stage at baseball’s cathedral on May 2, 2020 for a mega event that certainly plays like a tour stop. The NYC event is part of Joel’s “America’s Night of Hope” … which he takes to several cities across the country.
We’re told Joel will do his sermon at Yankee Stadium, and then let Kanye and his choir do their thing with the music. Call it a double play, considering the setting, similar to what they did a few weeks ago in Houston.

If Joel’s past appearances at Yankee Stadium are any indication, this one’s sure to sell out quickly … especially now that Kanye’s involved. The stadium has a max capacity of 54,251 … almost 10,000 more than Lakewood.
This will be Joel’s third time doing ‘Night of Hope’ at the Stadium, but his first with Ye.

Joel Osteen Ministries
Our sources tell us the Lakewood get-together went so well, Joel recently asked Kanye about when they will do a sequel … and they agreed Yankee Stadium would be the perfect backdrop. They’re coordinating details now.
As far as how much these tickets might go for … they could be decently priced.Past tickets for ‘Night of Hope’ sermons have gone for $15 a pop, but nothing’s set in stone quite yet.

Errr… Price of tickets around $15.00 ? At full capacity they will have received over $1 Million at that price….

Is this a ministry or something else?? Is it for the gospel or merely for enterprise?

I am sure both will have their books and merch there as well.