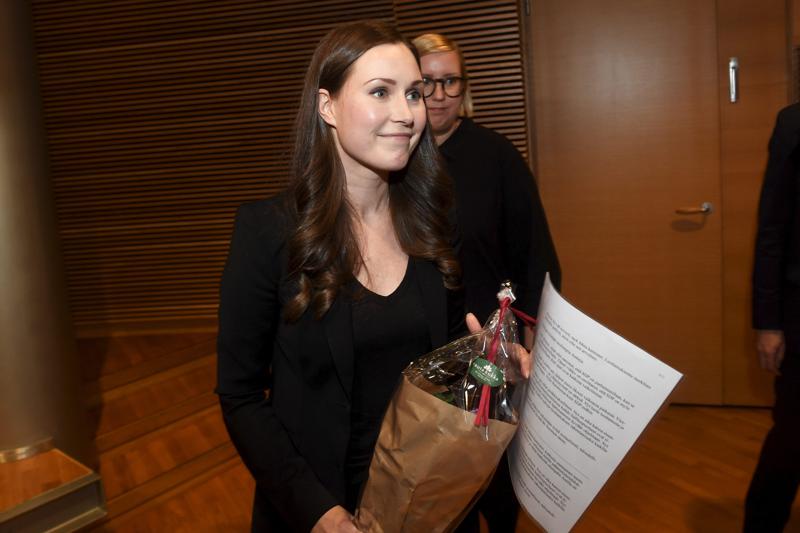 The candidate for the next Prime Minister of Finland, Sanna Marin, smiles after she won the SDP’s Prime Minister candidate vote against Antti Lindtman, in Helsinki, Finland, Sunday, Dec. 8, 2019.A 34-year-old minister and lawmaker has been tapped to become Finland’s youngest prime minister ever and its third female government head, replacing former Cabinet leader who resigned Tuesday. (Vesa Moilanen/Lehtikuva via AP)

TALLINN, Estonia (AP) — A 34-year-old transport minister and lawmaker has been tapped to become Finland’s youngest prime minister ever and its third female government leader.

Having emerged as Finland’s largest party in the April election, the Social Democrats can appoint one of their own to the post of prime minister in the Nordic nation of 5.5 million.

Marin has been the party’s vice chairwoman, a lawmaker since 2015 and served as until this week as the minster for transport and communications. According to Finland’s biggest newspaper Helsingin Sanomat and the Ilta-Sanomat tabloid, Marin will become the world’s youngest sitting prime minister.

Finland currently holds the European Union’s rotating presidency until the end of the year. Lawmakers are likely to approve the appointment of Marin and her new government quickly so she can represent Finland at the Dec. 12-13 EU leaders’ summit in Brussels.

Rinne stepped down Tuesday after a key coalition partner, the Center Party, withdrew its support, citing lack of trust. The Center Party also criticized Rinne’s leadership skills prior to a two-week strike by the country’s state-owned postal service Posti in November that spread to other industries, including the national flag carrier Finnair.

Rinne’s resignation prompted the formal resignation of a coalition of the Social Democrats and the Center Party and three junior partners: the Greens, the Left Alliance and the Swedish People’s Party of Finland.

On Sunday, Social Democrats and the four other coalition parties said they are committed to the government program agreed upon after the April election and will continue in Marin’s new government. The new government will still have a comfortable majority of 117 seats at the 200-seat Eduskunta, or Parliament.

Social Democrats said Sunday they’re seeking to have Rinne, a former trade union leader, become the parliament’s vice speaker. He also plans to stay on as the Social Democrats’ chairman until a party congress next summer.