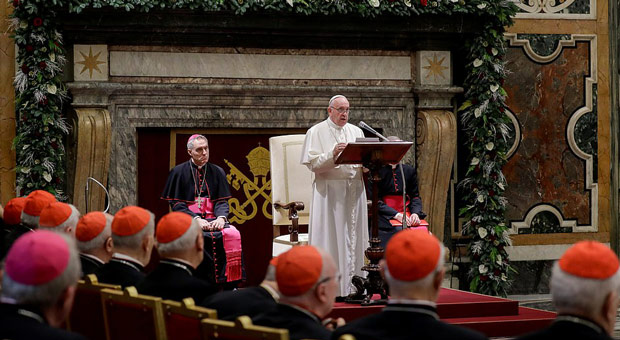 The head of the Catholic Church made the remarks he spoke candidly to cardinals, bishops, priests and members of staff on Saturday in the Sala Clementina in the Apostolic Palace, Vatican City for his annual Christmas address.

The pope warned other church leaders that the church no longer enjoys the authority it once did, suggesting they should encourage followers to be more inclusive of other religions. 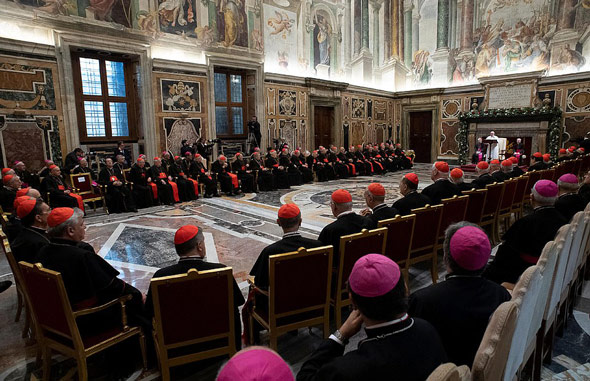 This year saw the papacy rocked by historical sex abuse claims and financial scandals yet again. After he called for married men to be ordained as priests, the liberal pope’s leadership has also been challenged.Francis also caused outrage among more conservative Vatican officials when he was seen with a “pagan” statue of a pregnant woman while in the Amazon.

Pope Francis made the remarks during his annual Christmas address in the Sala Clementina in the Apostolic Palace, Vatican City During his Christmas message, which was also delivered at the Paul VI Hall, Vatican City, the pope also asked Vatican bureaucrats to consider embracing change. “Today we are no longer the only ones that produce culture, no longer the first nor the most listened to,” he said.

The faith in Europe and in much of the West is no longer an obvious presumption but is often denied, derided, marginalized and ridiculed.””Here we have to beware of the temptation of assuming a rigid outlook.”Rigidity that is born from fear of change and ends up disseminating stakes and obstacles in the ground of the common good, turning it into a minefield of misunderstanding and hatred.”

He recalled, as he has in the past, that people who take rigid positions are usually using them to mask their own problems, scandals or “imbalances.” “Rigidity and imbalance fuel one another in a vicious circle,” he said.”And these days, the temptation to rigidity has become so apparent.”

The pope suggested Christians should be less ‘rigid’ and more open to other faiths Francis’s message appeared aimed at conservative and traditionalist Christians, including within the Vatican Curia, who have voiced increasing opposition to his progressive-minded papacy.

Traditionalist Catholics have denounced Francis’s emphasis on mercy and openness to doctrinal wiggle room on issues such as sacraments for divorced and civilly remarried Catholics. They also sharply criticized his recent synod on the Amazon, which called for the ordination of married men as priests, and what they considered pagan worship of an Amazonian statue of a pregnant woman that was featured during the meeting.

Francis has defended his outlook and priorities as a reflection of the Gospel, and the axiom that the true tradition of the church is one of a discerned path of change.

“Tradition is not static, it’s dynamic,” he said during his Christmas address.