A second person has been diagnosed with the deadly coronavirus in Queensland, taking the national total to nine.

Stephanie Bedo and Charis Chang
news.com.auJANUARY 31, 202012:10AM
As the Coronavirus epidemic spreads globally, the people of the world cope with its effects on daily life.

A ninth person has been diagnosed with the deadly coronavirus in Australia.

A 42-year-old Chinese national woman from Wuhan has been confirmed to have the infection, in the second case for Queensland, the state’s health department has confirmed.

There have been four cases in NSW and three in Victoria so far, taking the national total to nine.

The latest woman was a member of the tour group travelling with the 44-year-old man confirmed to have the virus in Queensland yesterday.

The woman is currently isolated in the Gold Coast University Hospital and is stable. Seven other people from the same tour group remain in isolation in the same hospital.

It comes after a third person was diagnosed in Victoria earlier on Wednesday.

The woman in her 40s, a visitor from Hubei Province in China, is in a stable condition with the respiratory illness.

She is in isolation at the Royal Melbourne Hospital.

Victoria’s Department of Health and Human Services said the woman attended a GP and was referred to hospital immediately.

Victoria currently has eight pending results and a total of 71 negative results.

NSW Health has so far tested 50 people that have returned negative results, and 20 more are under investigation. In Queensland 44 people are being tested.

Mr Hunt said they were being treated and were not seeking consular assistance at this stage.

They were in Guangdong province, not Hubei province where the majority of cases have been located.

“My advice before coming to this event from the national incident centre in our morning briefing is that two Australians did contract the virus in Guangdong province,” Mr Hunt told reporters at a press conference.

“They have been treated and the advice that I have, and I would want to be cautious on this, is that they have been released and are not seeking consular assistance at this stage.”

The 44-year-old man confirmed to have the virus in Queensland travelled from Melbourne to the Gold Coast on January 27, onboard Tigerair flight TT566.

Health authorities urge anyone who was on the flight with concerns to contact them on 13HEALTH.

Australian Deputy Chief Medical Officer, Professor Paul Kelly told reporters that the coronavirus was being spread by “droplets” and it was not an airborne disease like measles.

These droplets are spread when people cough or sneeze but they rapidly die once they hit a surface. They can’t be transmitted over long distances.

He said people would be unlikely to contract the virus via casual contact.

“We are talking about close contact over a period of time,” he said.

He said some Australians were worried about contracting the virus from parcels being sent from China, or walking past someone who was sick.

But he said you could not get the disease from parcels and passing someone was “virtually totally safe”.

Prof Kelly said people with droplet infections generally only infected one or two extra people, unlike airborne diseases like measles that can spread to 10 people.

“It’s definitely not as transmissible or as dangerous as measles for example,” he said.

Passengers on a Tigerair flight on January 27 may have been exposed to coronavirus. Picture: Shae Beplate.Source:News Corp Australia

There have been 7711 confirmed cases of coronavirus around the world.

The new virus has now infected more people in China than were sickened during the 2002-2003 SARS outbreak.

On Wednesday, the number of cases in China jumped to 5,974, surpassing the 5,327 people diagnosed with SARS.

The death toll, which rose to 170 on Thursday, is lower than the 348 people who died in China from SARS, or severe acute respiratory syndrome.

Diners of a Melbourne restaurant have been warned about symptoms and a Chinese New Year Festival in Box Hill has been cancelled.

The festival in Melbourne’s eastern suburbs draws more than 150,000 people, but has been cancelled just two days before it was due to be held, over fears about coronavirus.

Organisers, the Asian Business Association of Whitehorse posted a message on its website that the festival had been postponed to a later date.

“Due to the many rumours that are spreading around we do not think it is the best time to have a festival of celebrations,” the message said.

Meanwhile, diners are being warned to be aware of symptoms if they went to The House of Delight restaurant in Glen Waverley in Melbourne’s southeast on Australia Day.

A man in his 60s who travelled to Wuhan City in China, has been confirmed to have coronavirus and is now being isolated while he recovers.

Victoria’s chief health officer Dr Brett Sutton said the man became sick on January 23, two days after returning from China and had remained isolated except for attending dinner with his family on Australia Day.

The man ate at The House of Delight with five family members between 5.30pm and 7pm.

Dr Sutton urged anyone who was at the restaurant during this time to be aware of symptoms.

But he also sent a message of caution.

“That restaurant is OK to go to now, people don’t need to avoid the area or indeed anywhere else,” he said.

However, the restaurant appears to have closed until February 9, a sign on its door suggests.

Sign on the door of the House of Delight restaurant in Glen Waverley informing that they will be shut until February 9.Source:Herald Sun

The man’s three adult and two child relatives have been isolated with him. One has already tested negative for the virus, while the children are being kept from school.

Australia’s chief medical officer is now recommending anyone who has travelled in the Hubei province to self-isolate for 14 days after leaving the province. 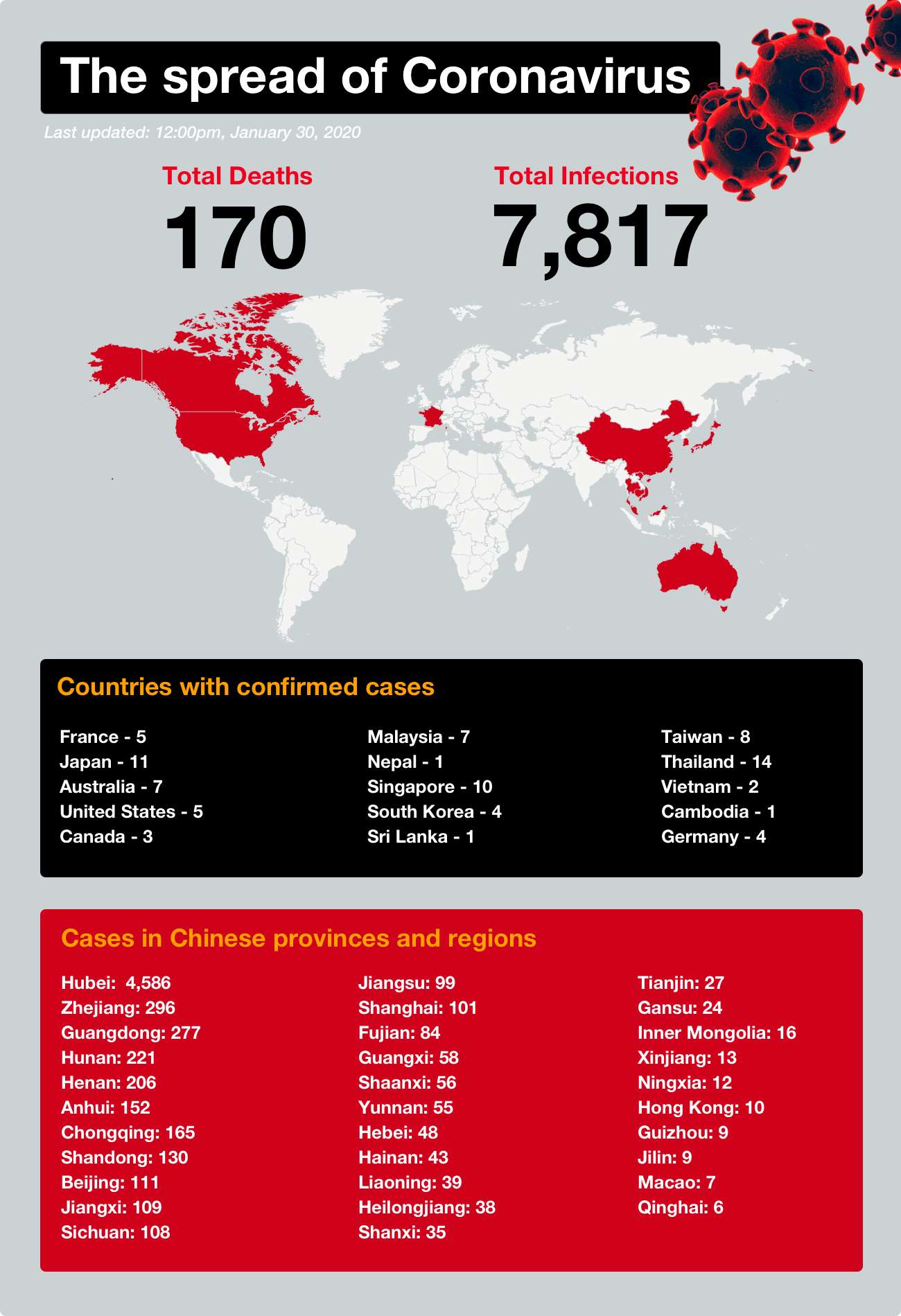 SPREADING AMONG PEOPLE OUTSIDE CHINA

World health officials, back from a visit to Beijing, expressed great concern Wednesday that the new coronavirus spreading between people outside of China, even as the number of illnesses continue to grow dramatically inside that Asian nation.

Scientists say there are still many questions to be answered about the new virus, including just how easily it spreads and how severe it is.

The World Health Organisation’s emergencies chief told reporters on Wednesday that China was taking “extraordinary measures in the face of an extraordinary challenge” posed by the outbreak.

Dr Michael Ryan spoke at a news conference after returning from a trip to Beijing to meet with Chinese President Xi Jinping and other senior government leaders.

He said the epidemic remains centred in the city of Wuhan and in Hubei province but that “information is being updated and is changing by the hour.”

Ryan said the few cases of human-to-human spread of the virus outside China – in Japan, Germany, Canada and Vietnam – were part of the reason the UN health agency’s director-general has reconvened an expert committee to meet Thursday. It will assess whether the outbreak should be declared a global emergency.

RELATED: How new coronavirus is different to the flu

A picture taken in a laboratory of the National Reference Center (CNR) in Paris where testing for the virus is being carried out. Picture: Thomas SAMSON / AFP.Source:AFP

Ryan estimated the death rate of the new virus at 2 per cent, but said the figure was very preliminary.

With fluctuating numbers of cases and deaths, scientists are only able to produce a rough estimate of the fatality rate and it’s likely many milder cases of the virus are being missed.

In comparison, the SARS virus killed about 10 per cent of people who caught it.

The new virus is from the coronavirus family, which includes those that can cause the common cold as well as more serious illnesses such as SARS and MERS.

Ryan noted there were several aspects of the new virus outbreak that are extremely worrying, citing the recent rapid spike in cases in China.

He said that while scientists believe the outbreak was sparked by an animal virus, it’s unclear if there are other factors driving the epidemic.

“Without understanding that, it’s very hard to put into context the current transmission dynamics,” he said.

Meanwhile, countries began evacuating their citizens from the Chinese city hardest-hit by the virus.

Chartered planes carrying about 200 evacuees each arrived in Japan and the United States early Wednesday as other countries planned similar evacuations from the city of Wuhan, which authorities have shut down to try to contain the virus.

– with AAP and AP

Updated yesterday at 9:41am

Queensland health officials have revealed the Chinese women’s national soccer team is being quarantined in Brisbane over concerns about the possible spread of coronavirus.

“A 44-year-old Chinese national, who is currently isolated in the Gold Coast University Hospital, has been confirmed to have novel coronavirus,” Dr Young said in a statement on Wednesday night.

“The man, who is from the city of Wuhan (Hubei Province) is stable.”

It came as Victorian authorities confirmed that state’s second case, bringing the total number of cases nationally to seven.

The virus has infected more than 6,000 people around the world, most of them in China, where the death toll stands at 133.

Dr Young earlier said 32 people in the Chinese women’s soccer squad — including players and staff — travelled through the city of Wuhan one week ago, where the outbreak is believed to have begun.

In light of this, Dr Young said they had been placed in isolation in a Brisbane hotel until February 5.

The group were checked by border officials after arriving in Brisbane on a flight from Shanghai on Wednesday morning before being placed in isolation at a hotel.

Dr Young said authorities were working with the team and the hotel’s management to ensure the visitors remained separated from staff and other guests.

What is a coronavirus?

Here’s what we know about the novel coronavirus, or 2019-nCoV, and how worried you should be.

She said no-one from the group had shown any symptoms of the virus and the team had been travelling with their own doctor.

“There is absolutely no risk to anyone else in that hotel or to the staff in that hotel, these people are all well,” she said.

“They’ve been extremely cooperative, as has the Chinese consulate, and they will work with us, and the hotel has been fantastic as well.

“If any of these footballers develop any symptoms we will of course be taking them immediately to one of our hospitals … to be immediately assessed and tested and isolated.”

In a statement, Football Federation Australia (FFA) said the health and wellbeing of all players, staff and spectators was “of paramount importance to both FFA and the Asian Football Confederation (AFC)”.

“FFA is working with the Australian Government and AFC to explore the ramifications of this advice and how it may affect the staging of the Women’s Olympic Football Tournament Qualifiers,” the FFA said.

“As a result of these developments … FFA will not be going on sale [on Thursday] with tickets for the tournament.”

The Asian Football Confederation (AFC) has also changed the order of home matches to be played by Chinese clubs in the AFC Champions League group stage due to the coronavirus, Asian soccer’s governing body has confirmed.

The move follows consultation with the Chinese Football Association (CFA) and means that home games of the four Chinese clubs on the first three match days will be rescheduled and played away by swapping the order with their opponents.

“The decision, which was also made in conjunction with the competing clubs from the respective groups, is a precautionary measure to ensure the safety and wellbeing of all participating players and teams,” the AFC said in a statement.

According to the revised schedule, Beijing Guoan will open their campaign at FC Seoul on February 11 and visit Melbourne Victory on March 3.