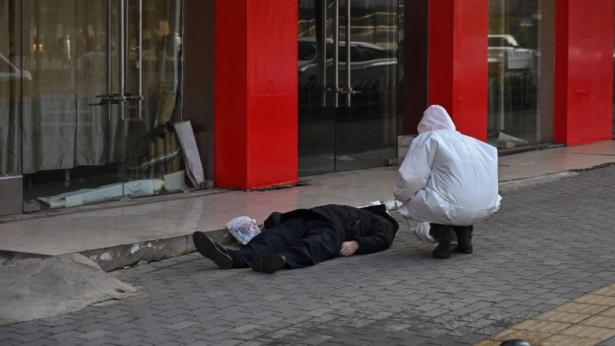 An elderly man wearing a facemask lies dead on the pavement after he collapsed along a street near a hospital in Wuhan, China, on Jan. 30, 2020. (Hector Retamal/AFP via Getty Images)

By NTD Newsroom February 2, 2020
An exclusive on coronavirus.

The number of deaths greatly exceeds those released by the Chinese regime, according to sources, who say the Hankou funeral crematorium is operating 24 hours a day. It has a capacity of 30 cremation furnaces.

As a result, actual numbers could exceed official figures by 10 times with no less than 200 deaths per day in Wuhan.

Hong Kong-based media reports an elderly woman named Liu Rong was sent to an isolation ward nine days after getting infected, but died within a few hours. Her body was immediately sent to the Hankou funeral home for cremation. According to the article, 14 to 20 cremators were all operating around the clock.

It takes a crematorium on average 1.5-3 hours to process a body, so the total number of dead being processed by the 14 crematoria of the Hankou funeral home could be between 112 and 224 per day.

On Jan. 28, an article surfaced on a number of mainland china news websites titled “Wuhan Civil Affairs Bureau Announces Exemption of Cremation Charges for the Remains of Patients Died in the Epidemic.” The reason was the sheer number of family members complaining to the Civil Affairs Bureau and the funeral home of the cost of delivering and cremating corpses. The usual cost is 12,000 yuan.

A manager of a funeral home in Wuhan told The Epoch Times that the government demanded all cremation of dead bodies due to the virus be handled by the Hankou funeral home. The government also supplied the funeral home with multiple vehicles to help meet the demand.

The Epoch times tried calling the Hankou funeral home several times, but wasn’t able to get through.

When the reporter told a different funeral home about that, the worker said it was because the Hankou funeral home was too busy.

A few days ago, a call for help came from medical staff in Wuhan on social media.