Lives and property could be at risk as major flooding threatens to wipe out the regional town of Dalby, 208 kilometres north of Brisbane.

New South Wales is also at risk of life-threatening flash flooding, with warnings in place for the Hunter region, as well as the greater Sydney, Illawarra and eastern parts of the Central Tablelands districts. 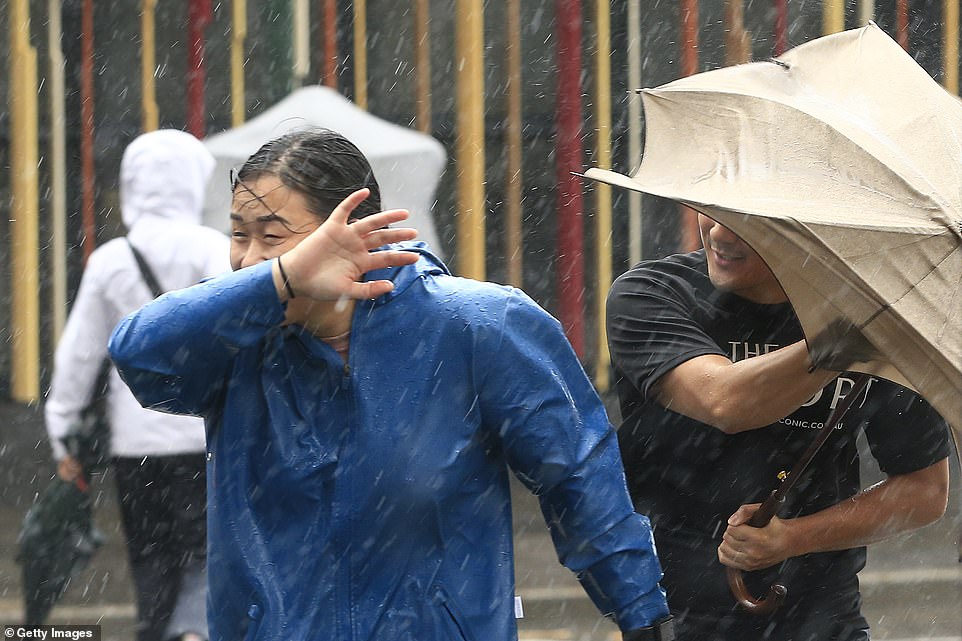 Pedestrians in Sydney are doused with torrential rain battering the city and surrounding areas as far north as Taree, with warnings of dangerous conditions along the coast 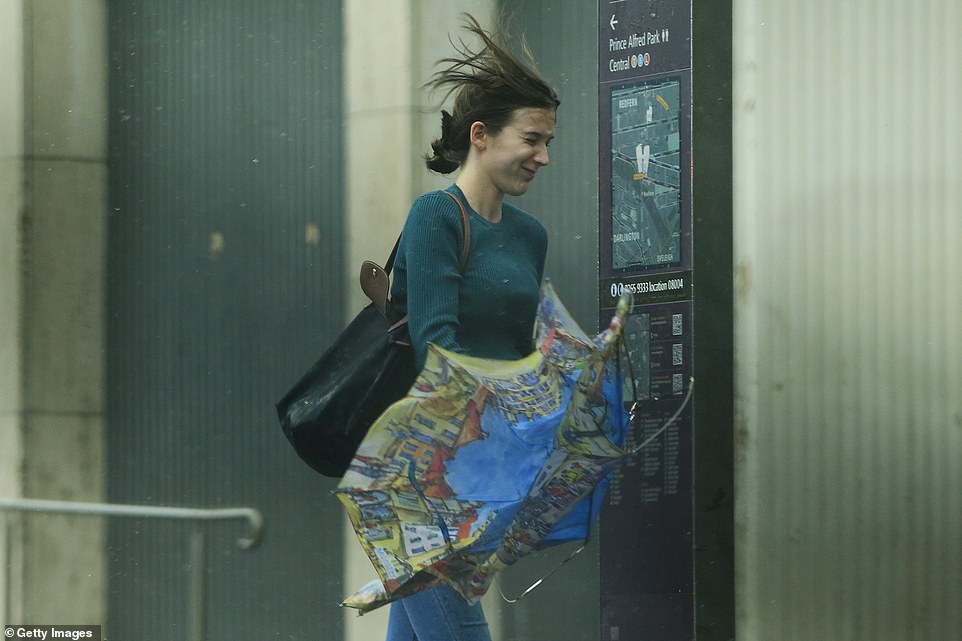 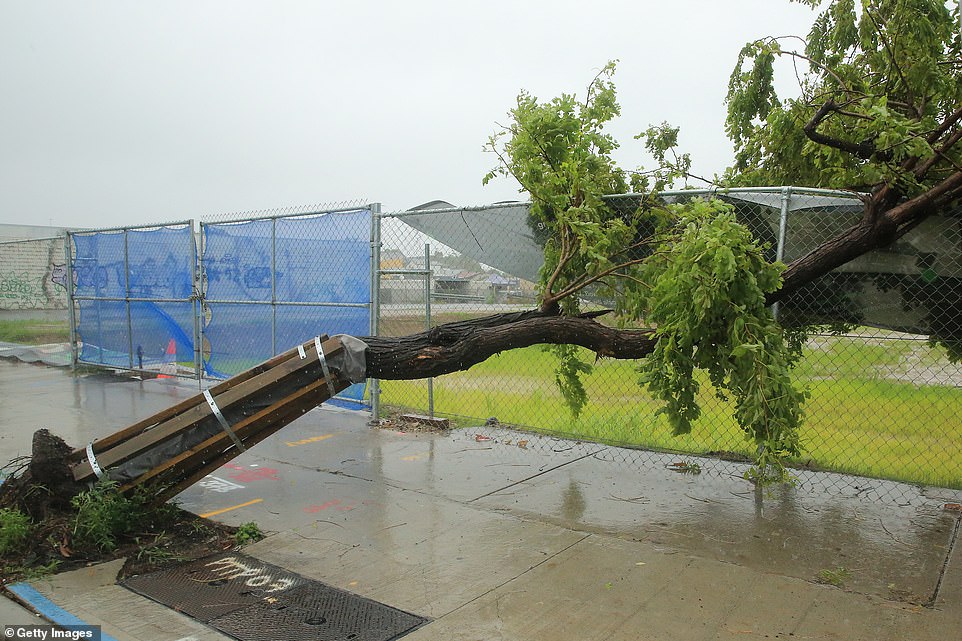 A tree in Redfern is blown clear over out of the ground, crashing into a fence as wild winds batter Sydney and the NSW coast 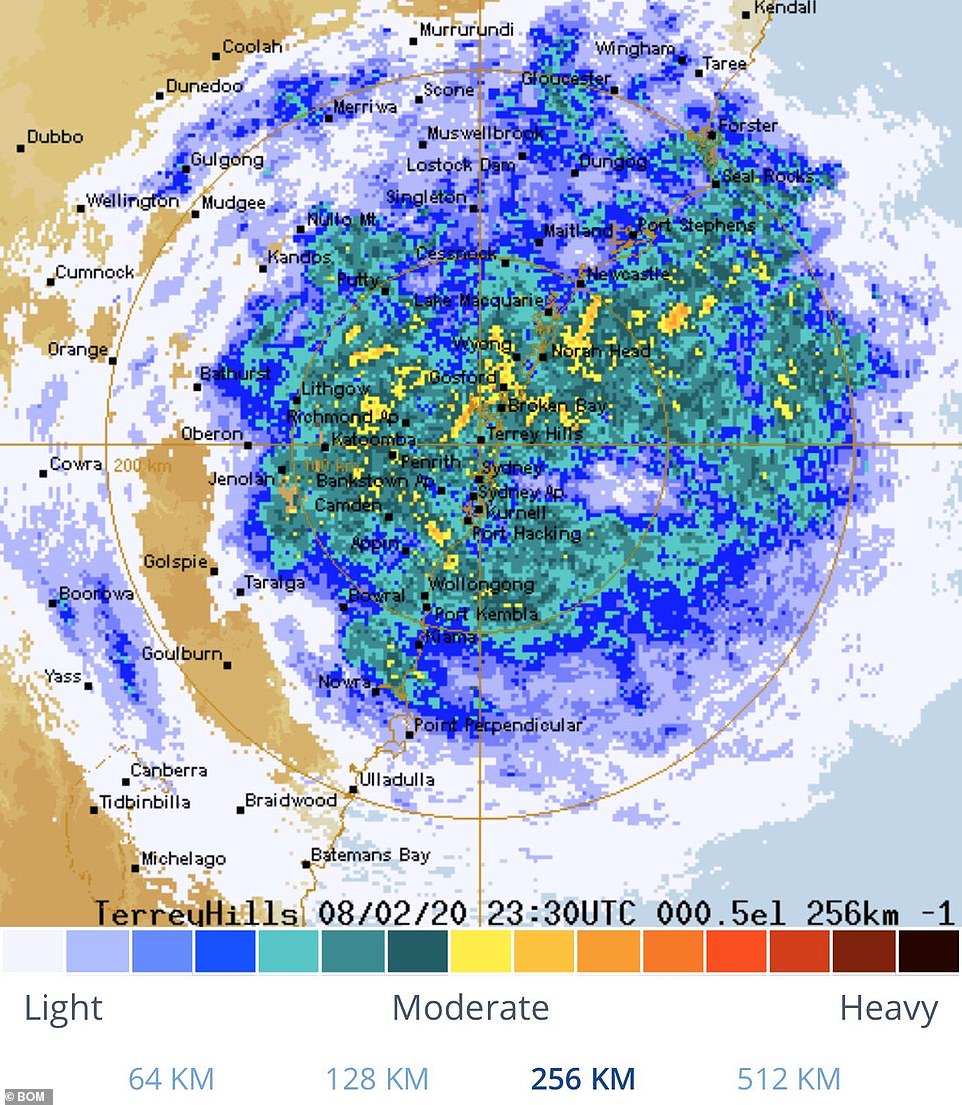 A weather bureau radar map shows the massive deluge of rain across Sydney and along the NSW coast, and stretching inland half way to Canberra

The state is copping the heaviest rainfall event it has endured ‘since the 1990s,’ according to BOM acting NSW manager Jane Golding.

Waves of at least four metres are forecast along most of the NSW coast, and three metres for the rest of the state.

Sydney’s beaches are getting particularly battered with swells of more than six metres forecast for Bondi Beach.

There are widespread power outages across Sydney’s far north and Hills District, plus others in East and West Ryde, Gordon, Pymble, Bexley, Hurstville, Lugarno, Peakhurst, Miranda, and Sylvania.

There are other localised outages in dozens of neighbourhoods across the lower north shore and eastern suburbs.

The Central Coast is even harder hit, particularly inland, with outages numerous from San Remo to Umina Beach. Areas around Niagara are the worst affected. 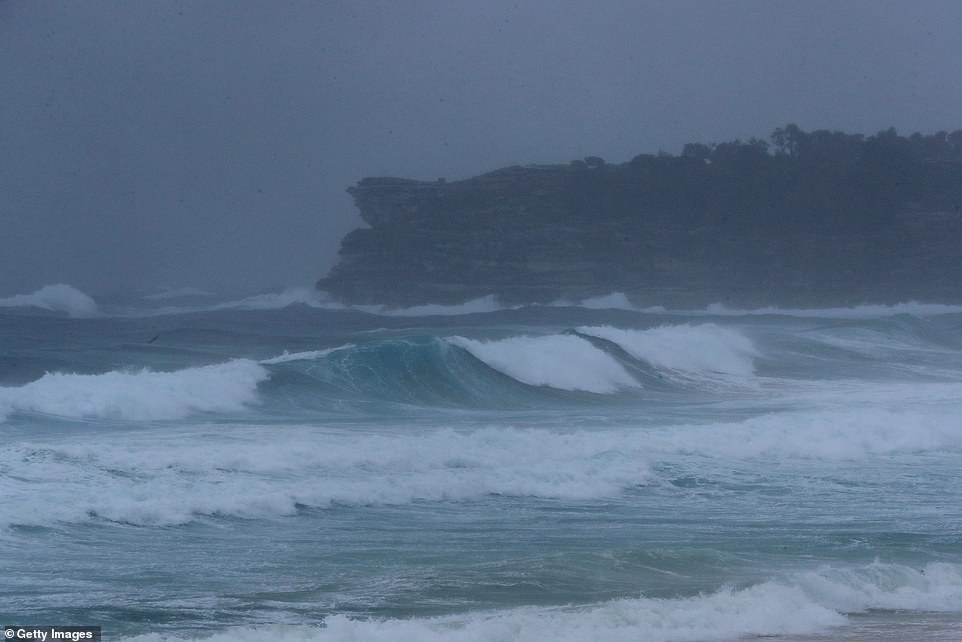 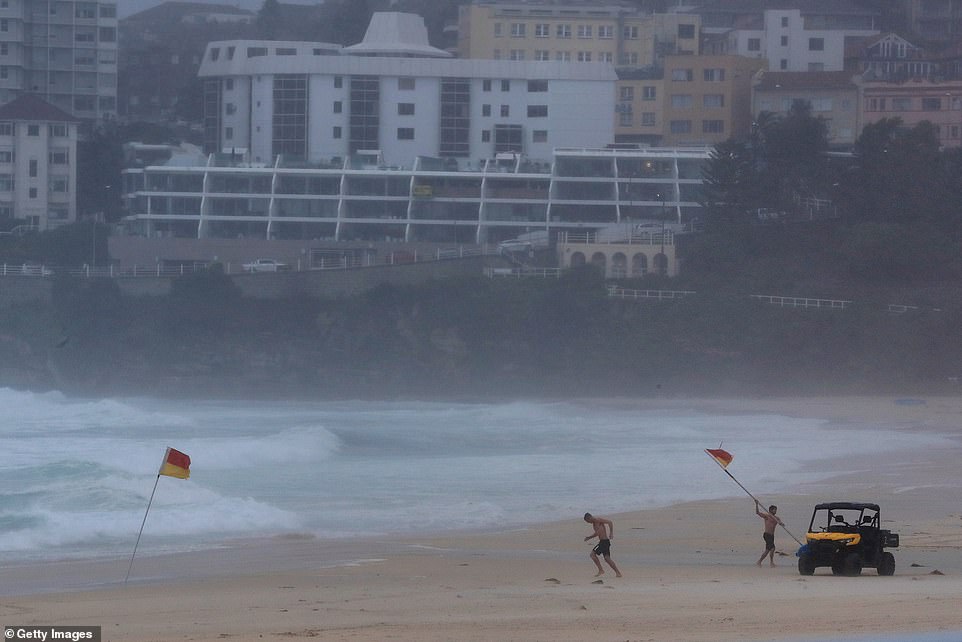 Rain drenched even the best-prepared pedestrians in Sydney with the strong winds turning umbrellas into useless pieces of twisted metal.

Trees were broken or even blown clear out of the ground by the wind and streets were turned into raging torrents that cars battled to drive through.

The rains have doused 24 fires in the past four days, including the Currowan bushfire on the South Coast which had been burning for 74 days.

But as rivers fill and overflow, emergency services are being stretched to their limits to conduct rescue operations for those stranded by rising floodwaters.

Train stations were flooded on Sunday morning after days of downpour, with photographs showing Narrabri station in rural NSW looking more like a ferry wharf.

The state emergency service has already conducted 26 rescues for people stranded in floodwaters, six of those along in the Grafton region on Saturday night. 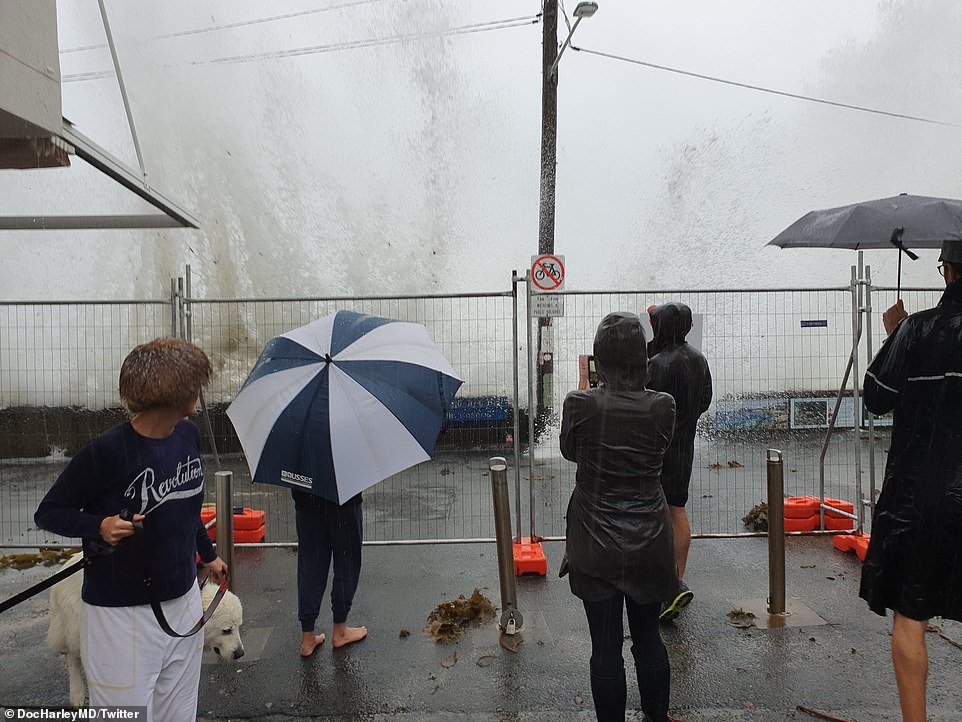 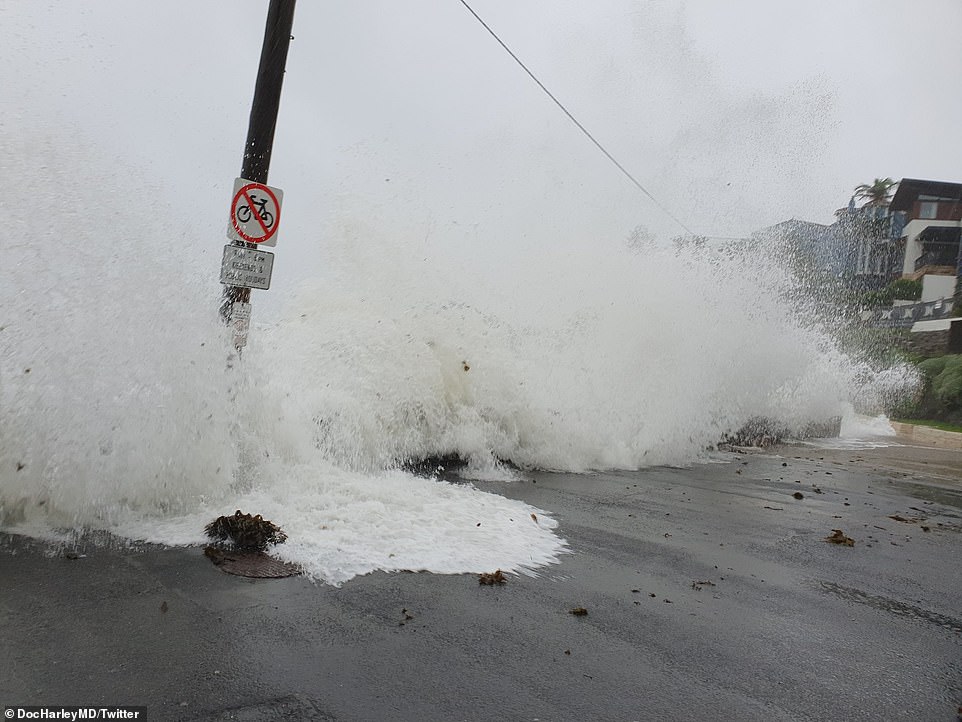 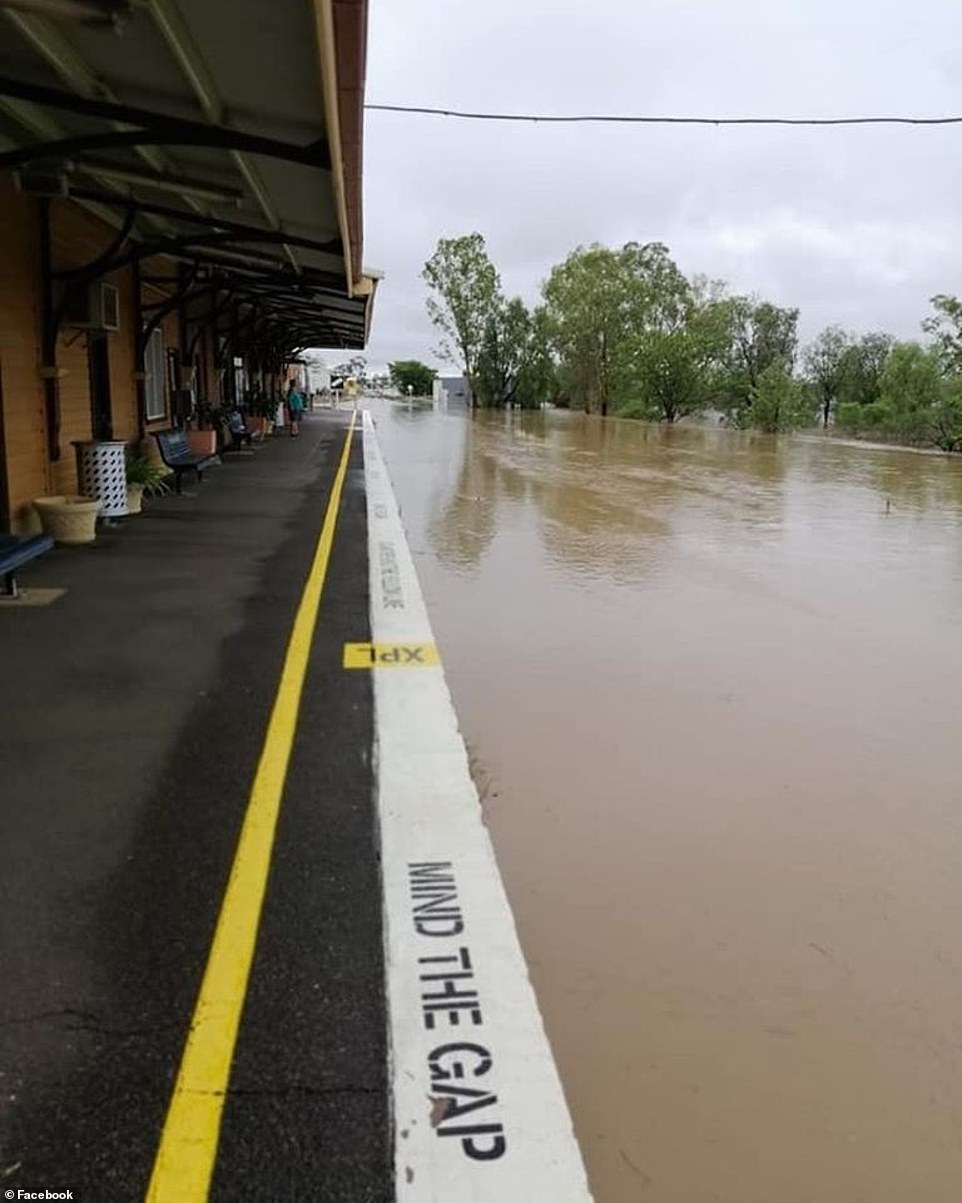 Train stations have been turned to ferry wharves, including at Narrabri station on the New South Wales North West Slopes 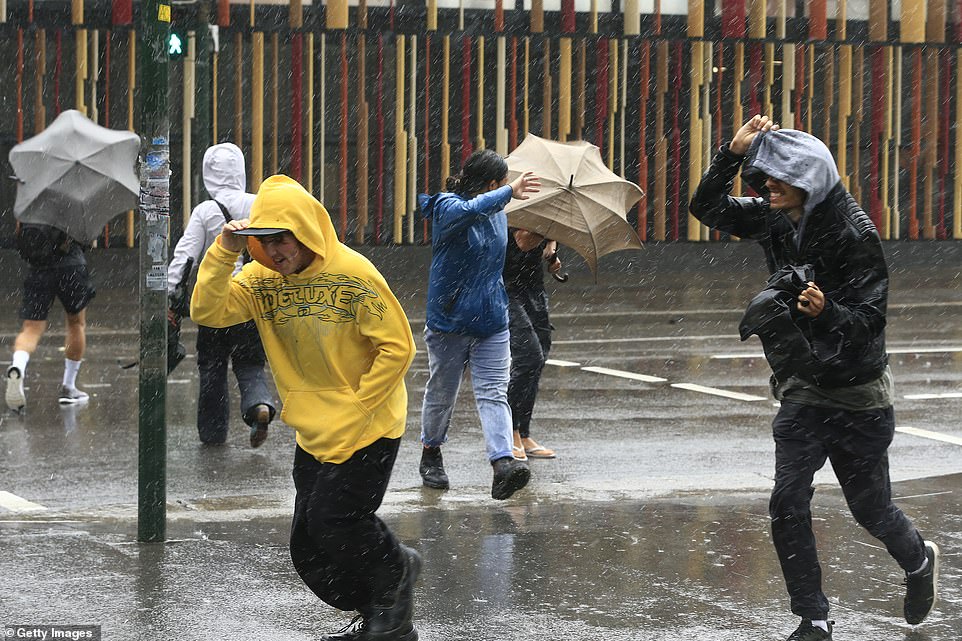 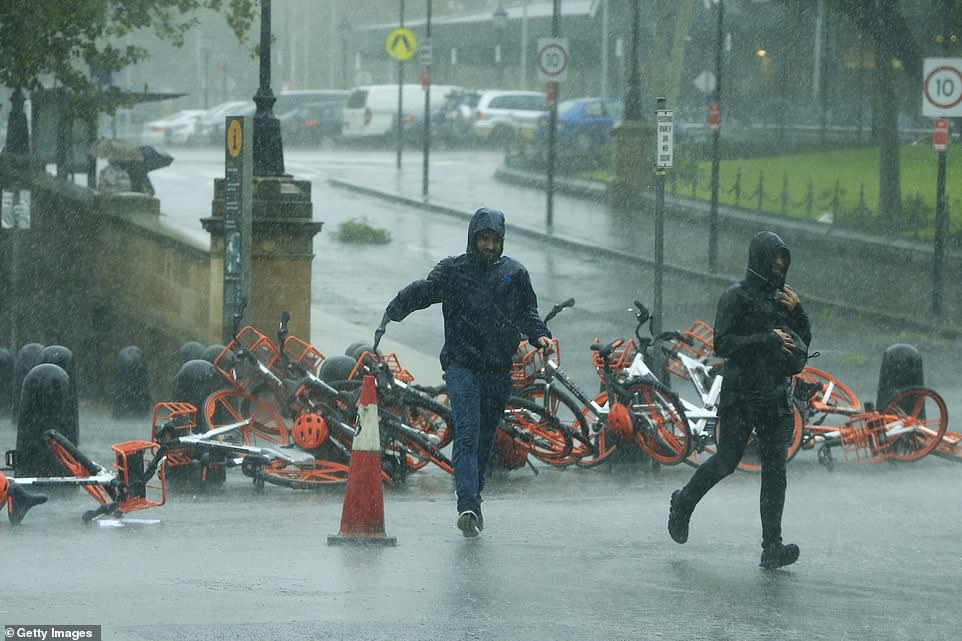 One family was rescued by the Rural Fire Service via helicopter after flood waters cut them off leaving them isolated in a car.

A teenager had to be freed from the raging Allyn River in the Hunter region northwest of Newcastle after he fell out of his canoe and was trapped against driftwood.

State Emergency Service crews waded and in and hauled him to safety along with NSW Fire and Rescue.

The emergency responders will be focusing on the Illawarra region on Sunday, predicting it will face the most intense rainfall totals in the state.

The Bureau of Meteorology expected rains to intensify through Sunday, after some stations in northern New South Wales recorded more than 300mm within 48 hours.

Cudgera Creek, in NSW’s north east, recorded 320 millimetres of rain in the period between 9am on Saturday and 4am on Sunday. 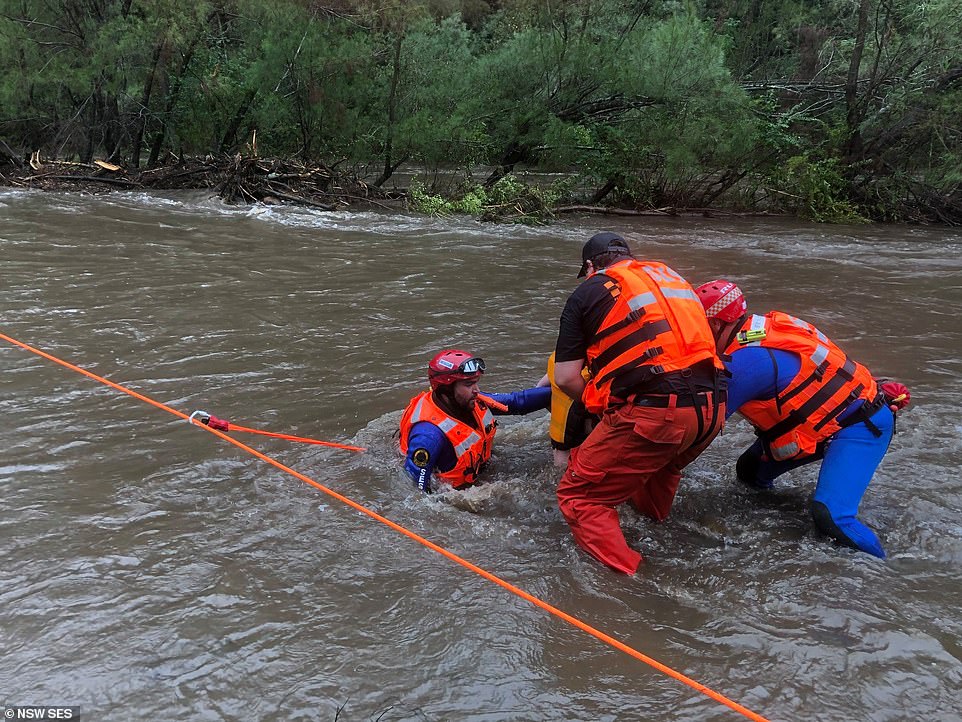 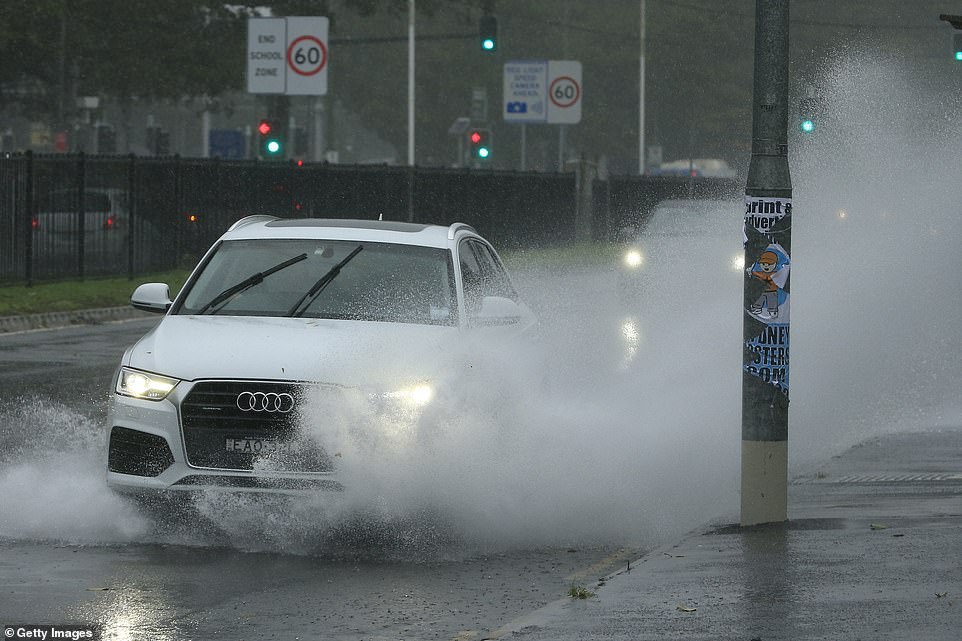 A car drives through streets turned to rivers , splashing a huge jet of water across the footpath in Sydney 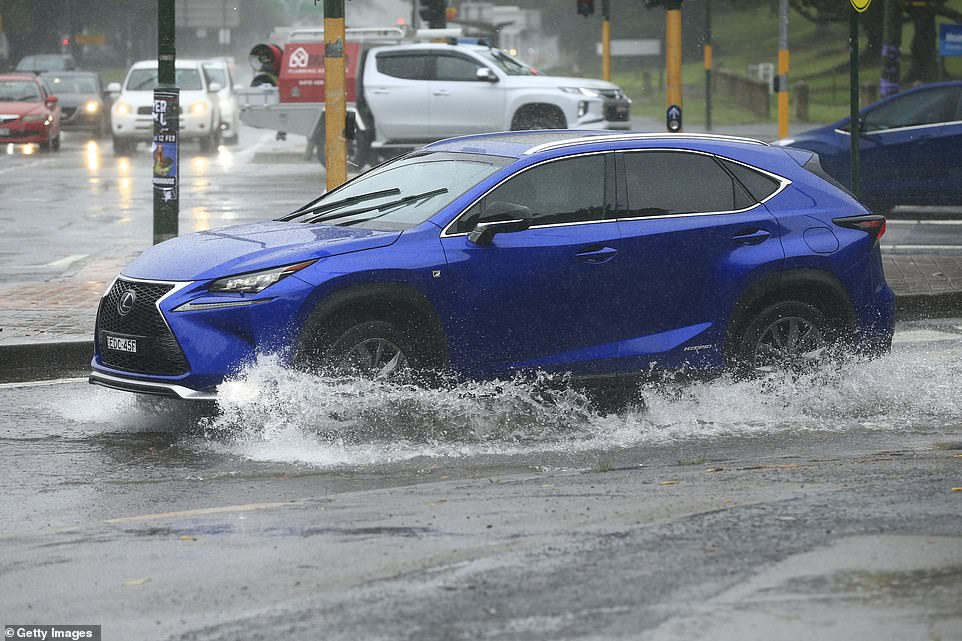 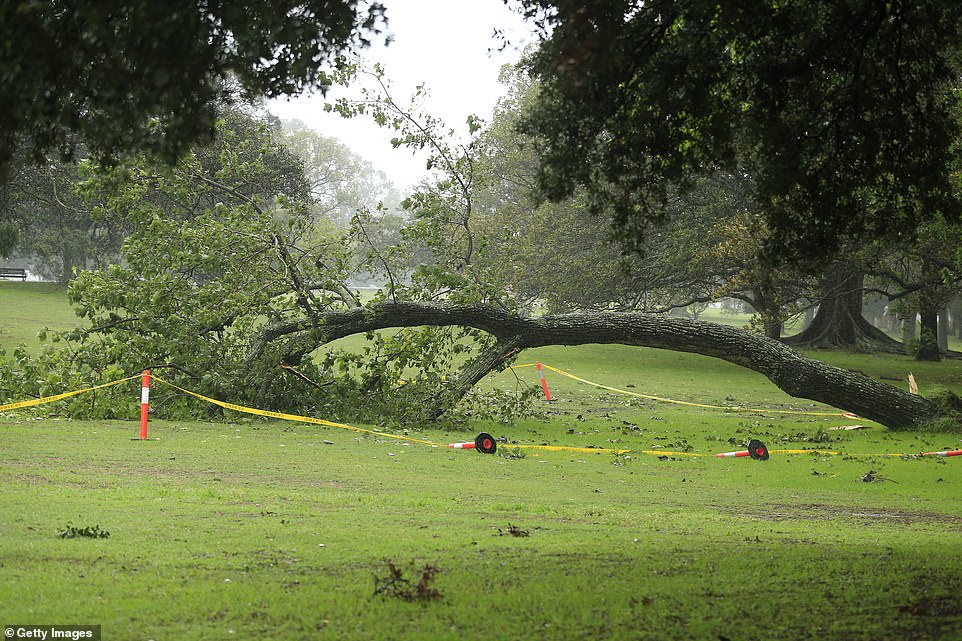 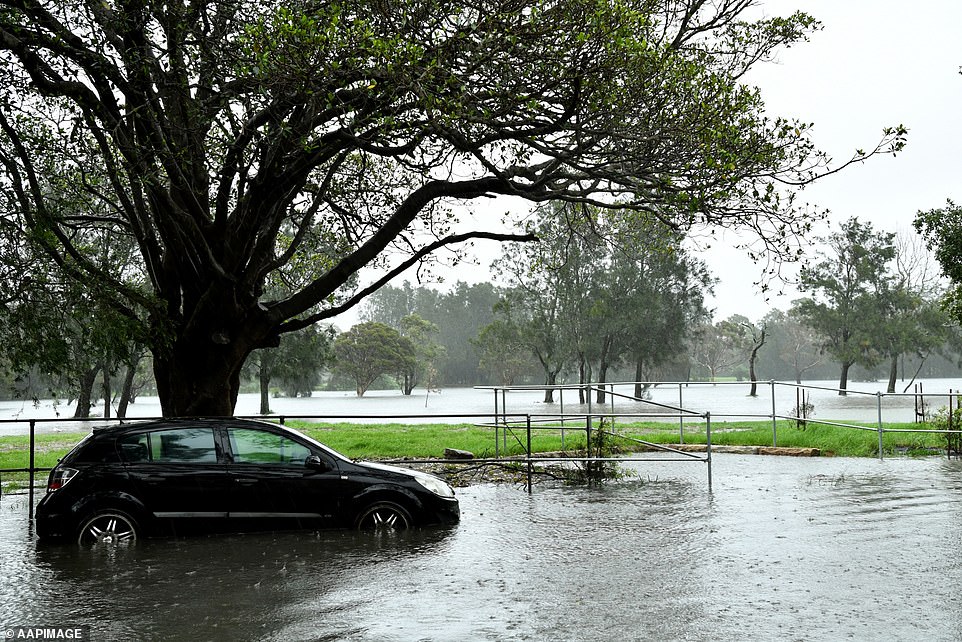 A car sits in the floodwaters at Marrickville in Sydney’s inner west on Sunday, with the water level halfway up its tyres

The wet weather has kept the SES busy, with the organisation responding to 3253 calls for help across the state since just after 4.30pm on Tuesday.

Overnight volunteers responded to 535 jobs – including 250 in greater Sydney and 231 in the state’s north.

Volunteers have responded to at least 26 flood rescues, mostly involving motorists who drove into floodwaters.

‘Now is the time to plan how you will protect your family and property from flood,’ Ms York said in a statement.

‘Never drive, ride or walk through floodwaters. It’s too dangerous – and you never know how deep the floodwaters are, the condition of the road or how fast the water is flowing.

‘Please keep clear of drains, creeks and causeways and if you are in a flood-prone area avoid parking vehicles in low-lying areas.’ 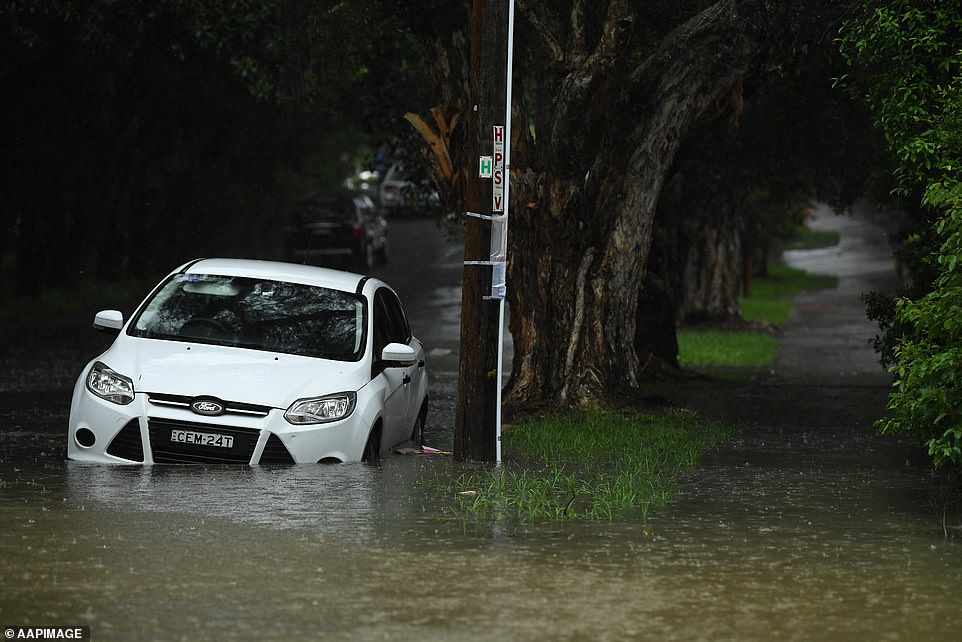 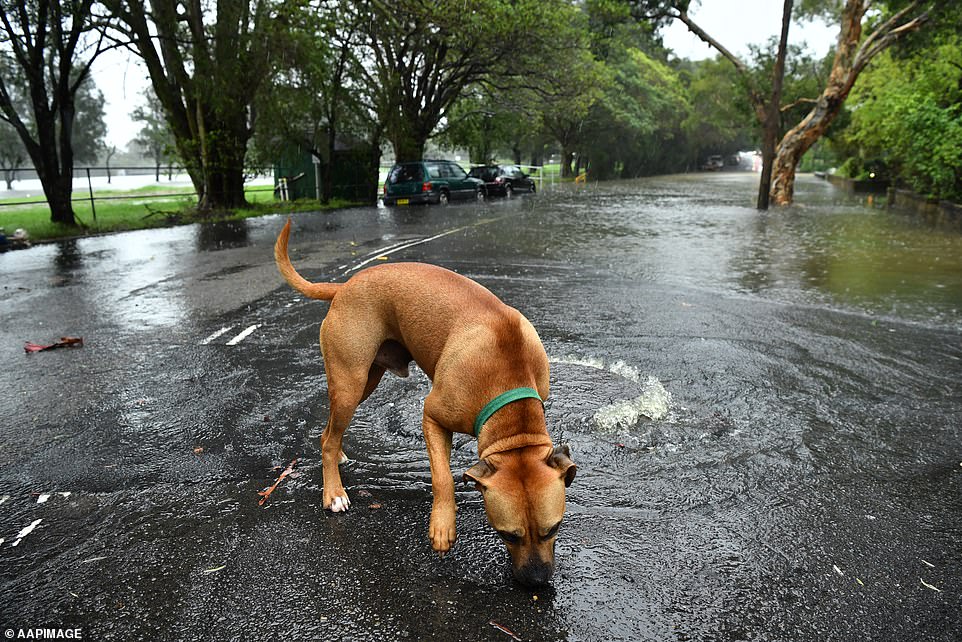 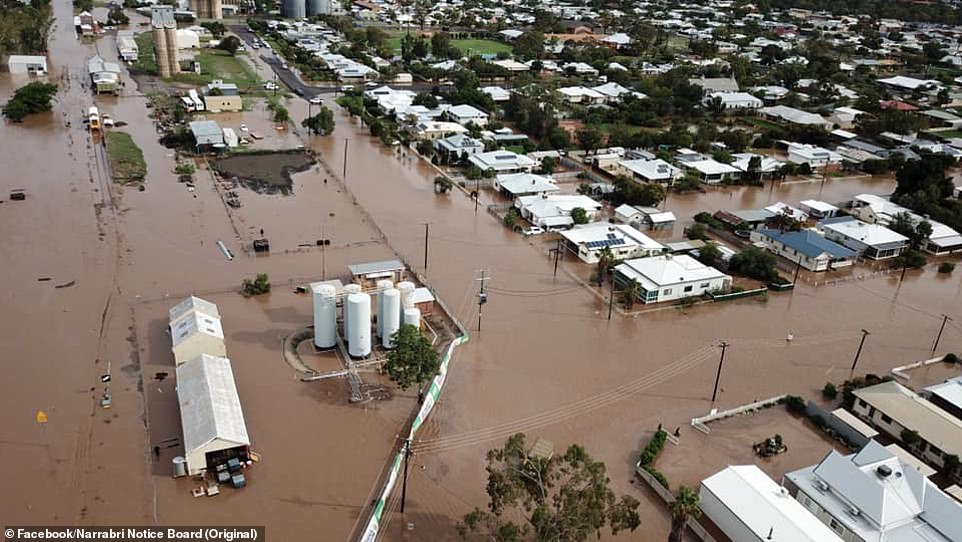 Some streets in Narrabri in northern NSW were completely flooded. Forecasters have warned of landslips, monster waves and flash flooding as the storm over Australia’s east coast intensifies after four days of continuous heavy rainfall 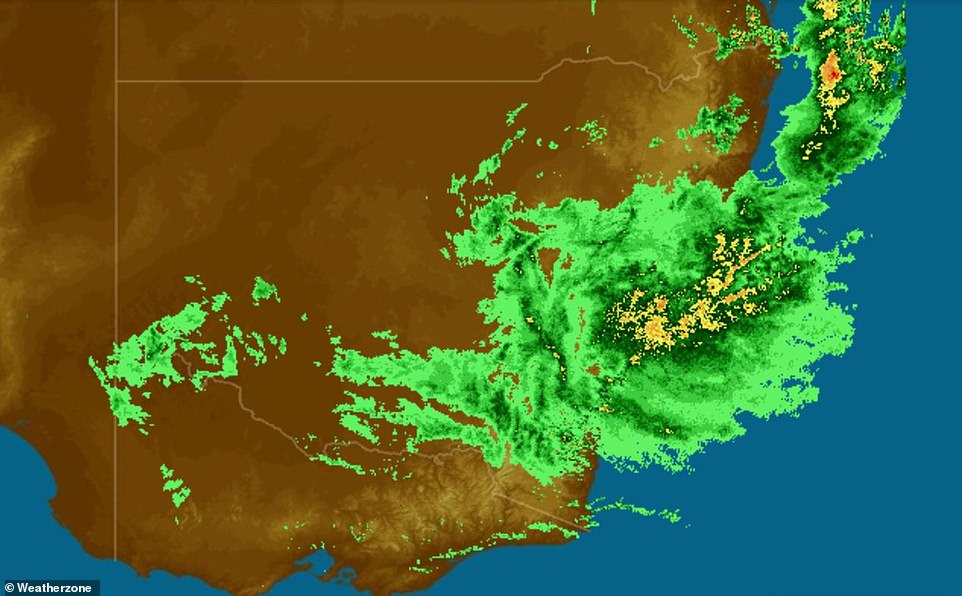 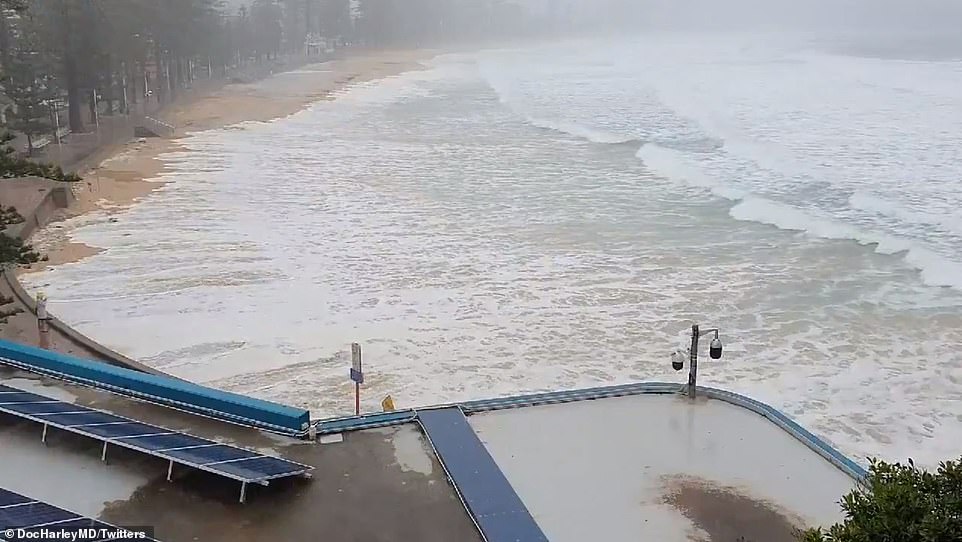 An initial minor flood warning is in place for the Tweed River, Wallis Lake and the Camden Haven River.

The storm has had a positive impact on the dry and scorched state, bringing the number of fires burning from 62 on Wednesday to 38 by Saturday night.

But the areas impacted by significant bushfires over the past few months are now in the firing line of torrential rain and flash flooding.

South Coast residents have been urged to prepare for landslides after intense bushfires left the burnt-out landscape incredibly unstable. 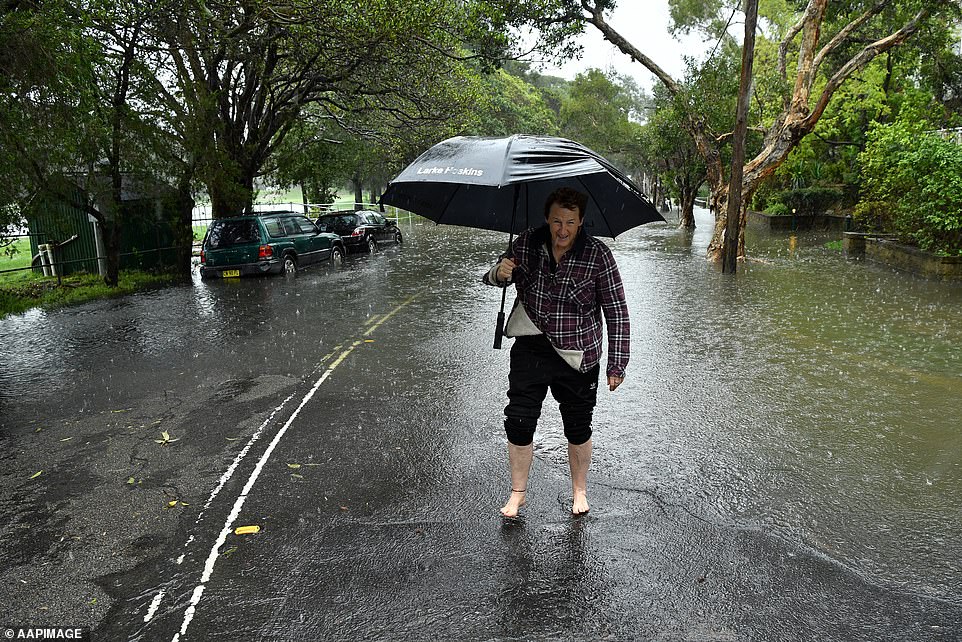 Sydneysiders brave the rain on Sunday, heading out in raincoats and umbrellas

By 8pm on Saturday, the Currowan bushfire (pictured) in Shoalhaven, just north of Batemans Bay was finally put out after burning for 74 days thanks to help from the rain

The bushfire scorched 499,621 hectares of earth, destroyed 312 homes and damaged 173 – but heroic firefighters managed to save 1,889 residences

BoM NSW state manager Jane Golding said ‘this is a very dangerous system’, adding that Golding rain was expected to intensify through Sunday.

‘Potentially we haven’t seen anything like this since the late 1990s,’ Ms Golding said.

The bureau predicted Sydney would see rainfall totals around 200m with south easterly winds of up to 60km/h, while Wollongong is likely to see about 300mm of rainfall.

Newcastle and the Central Coast will be lashed with gale-force winds of up to 70km/h and rainfall of up to 200mm. 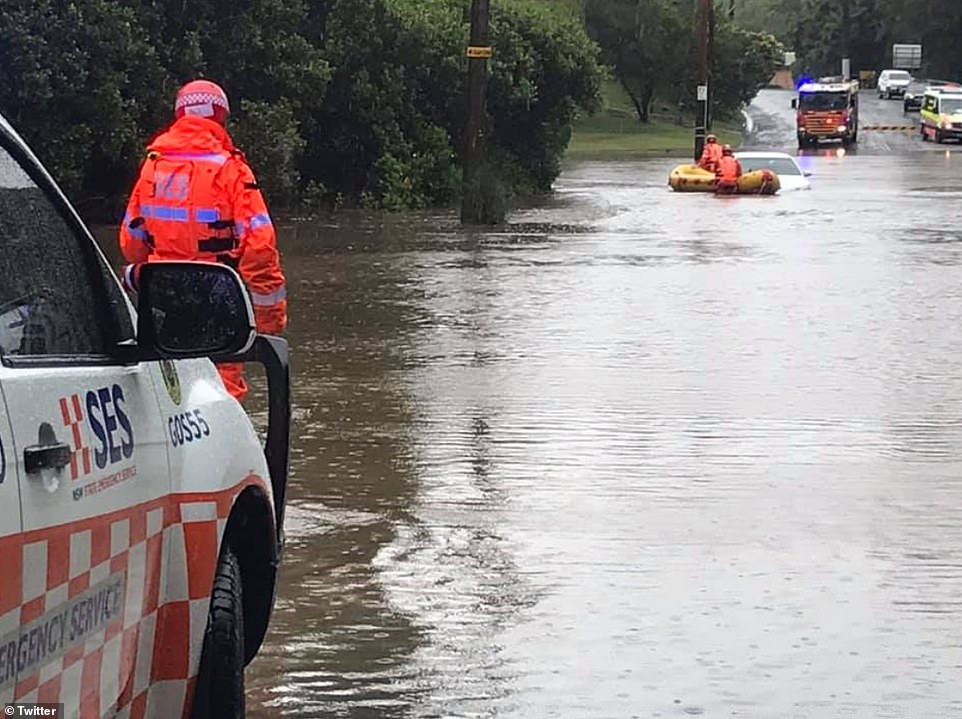 SES volunteers rescue a motorist trapped in flood waters. Since midnight on Wednesday, the NSW SES has carried out 26 flood rescues and received more than 3,253 calls for help

Car disappears under water as two women escape with their lives

Flash flooding has been putting people in life-threatening situations all weekend.

On Saturday, two women climbed out of their car windows as their vehicle was dragged under flood waters in Northern New South Wales.

Gill Sutherland, 67, and her niece Hannah, 30, were driving to Nimbin in the New South Wales Northern Rivers region when they crossed a flooded road on Saturday.

However, they quickly lost control of the car which filled up with water and sank, completely disappearing from sight.

Meanwhile, a tropical cyclone that lashed parts of the coast of Western Australia’s Pilbara region with destructive winds in excess of 200km/h is expected to weaken on Sunday.

Severe Tropical Cyclone Damien reached the coast near Dampier on Saturday afternoon, bringing fierce gales to the industrial port and the nearby city of Karratha.

The Bureau of Meteorology said on Saturday evening the cyclone had weakened to a category two system after earlier causing very destructive winds of up to 205 km/h.

Towns between Port Hedland and Onslow were warned they would feel its brunt, including Pannawonica and Barrow Island. 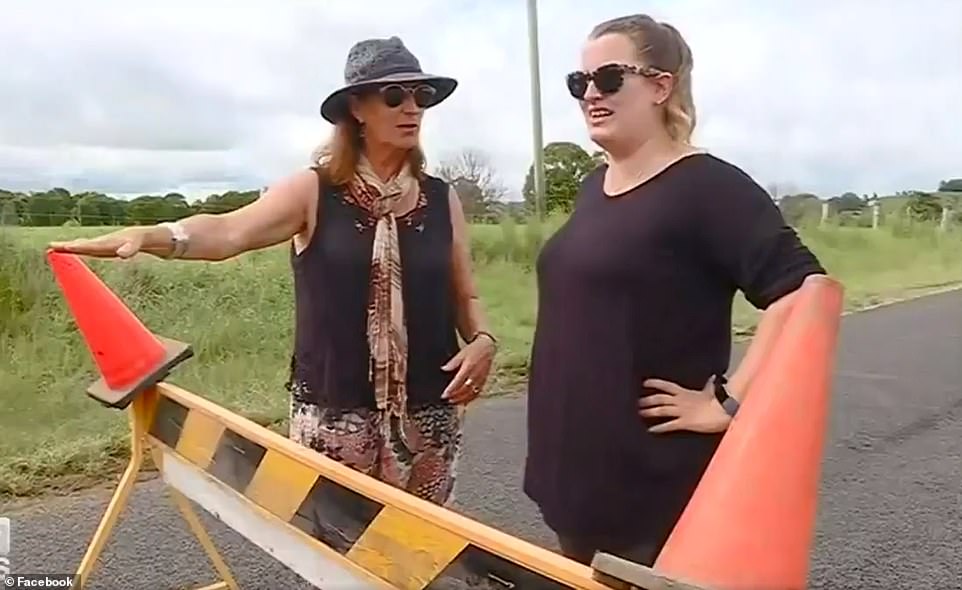 Gill Sutherland (left), 67, and her niece Hannah (right), 30, were driving to Nimbin in the NSW Northern Rivers region when their car sank in flood water

In shocking footage, Ms Sutherland and Hannah can be seen climbing out of the car windows and wading through the flood. The video was recorded by a family who was driving behind them and narrowly avoided the same fate

The same was true for parts of the Pilbara and Gascoyne regions, including Tom Price, Paraburdoo and Mount Augustus.

Residents between Dampier and Whim Creek had been warned of the potential for a very dangerous storm tide.

Heavy rain had also been expected to cause flooding in the Pilbara and Gascoyne regions, with falls of up to 300mm or more possible in some areas.

Karratha had already experienced 109mm by about 6:30pm AWST on Saturday.

A “red alert” was in effect on Saturday for people in or near Whim Creek to Mardie and south to Pannawonica, with residents told to seek shelter immediately.

The cyclone is expected to weaken as it continues to move inland, tracking south-to-southeast, before eventually losing its cyclone status on Monday.

Perth is not expected to be affected by Damien.

This is the third cyclone of the season off the WA coast.