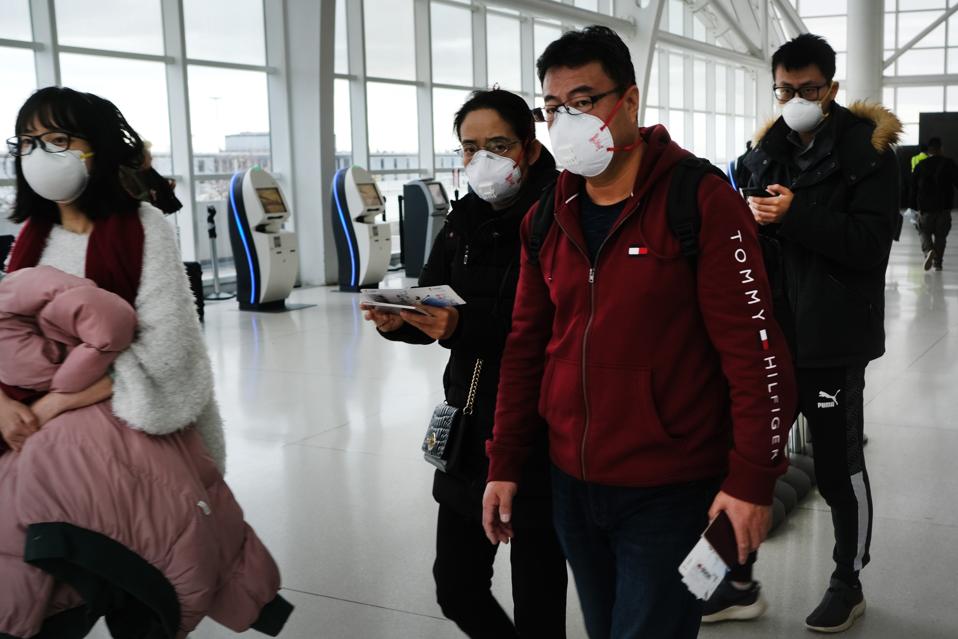 The L.A.-based company Dimer has donated one of its GermFalcon machines to the airport, where it’s … [+]

Robots To The Rescue: How High-Tech Machines Are Being Used To Contain The Wuhan Coronavirus

When doctors in a Washington hospital sought to treat the first confirmed case of the Wuhan coronavirus in the United States on Wednesday, they tapped a device called Vici that allowed them to interact with their patient not in person, but through a screen.

The telehealth device, which looks like a tablet on wheels that doctors can use to talk to patients and perform basic diagnostic functions, like taking their temperature, is one of a handful of high-tech machines that doctors, airport workers and hotel staff are using to help contain the outbreak that has been sweeping the world since it was discovered in Wuhan, China, in late December.

“Caregivers provide care within the isolation unit, but technology is allowing us to reduce the number of up-close interactions,” says Dr. Amy Compton-Phillips, chief clinical officer at Providence Regional Medical Center in Everett, Washington, where the patient is being treated. Vici, made by Santa Barbara, California-based InTouch Health, resembles a tablet on wheels, and can protect caregivers from infection.

“Minimizing the spread of this new virus is especially important because we have not yet built up any immunity to it,” Compton-Phillips says. During the SARS coronavirus outbreak in 2003, a large portion of those affected were healthcare workers, highlighting the difficulties of remaining safe while providing treatment.

China’s national health commission and the Centers for Disease Control and Prevention say that the infection can spread from person to person, making telehealth devices and robots that minimize human contact in hospitals potentially lifesaving.

“If it’s not essential for certain supporting staff to be in the patient areas, it’s best for them to avoid it. The fewer people who are in contact with infected patients, the better,” says Peter Seiff, an executive at Aethon, a Pittsburgh-based private company that sells a robot called TUG that autonomously ferries medical supplies throughout hospitals.

Aethon’s TUG robots are being deployed at over 140 sites, though the company wouldn’t comment on whether the device is being used at any of the U.S. hospitals where more than 240 patients have been investigated for the novel coronavirus that has so far killed at least 200 people in China.

There, robots are delivering both food and medical supplies to people suspected of having the virus, according to Chinese news reports. A robot named “Little Peanut” is delivering meals to people quarantined in a hotel, while a hospital in southern China has rolled out bots to deliver medicine and collect bed sheets and rubbish.

Beyond delivery and telehealth, there’s surging demand for cleaning and disinfecting robots. Xenex, a San Antonio, Texas-based company that sells robots that use pulsed xenon UVC light to wipe out pathogens, says its devices are currently being used to clean rooms at facilities with suspected cases of the Wuhan coronavirus.

“Our science team has been on the phone nonstop with hospitals to discuss protocols for disinfecting rooms and areas where suspect patients have been and are being treated,” says spokesperson Melinda Hart. “We’ve also been in contact with government contacts in China and the U.S. to explore how quickly we could export robots to China.”

The devices, which cost about $100,000, have been shown to decrease healthcare-associated infections—those which are contracted while a person is receiving care for something else—in several individual hospital studies, done in collaboration with the company.

Meanwhile, a Los Angeles-based company called Dimer has offered one of its germ-killing machines to an airline at the city’s international airport for free. Normally, the GermFalcon devices sell for $100,000 per unit.

“We have been disinfecting inbound planes from China at LAX the last several days,” says president Elliot M. Kreitenberg. “Our machine fits in the interior of a plane like a puzzle piece and delivers high doses of ultraviolet light to the surfaces that you are most in contact with in a long-haul flight.”

While machines to help contain a virus’ spread are much more common now than they were during the 2003 SARS epidemic, the Wuhan coronavirus has already spread faster.