Seventy more passengers and crew on board the Diamond Princess cruise ship have tested positive for the coronavirus.

Japan’s Health Minister announced this morning the extra cases from 289 new tests, on top of the 67 new infections from Saturday.

Thirty-eight of the 70 new infections have no symptoms. No-one from the ship has died of the virus.

Forty American passengers were taken off the cruise liner to fly home, with Canadian, Italian, South Korean and Hong Kong passengers expected to follow after their governments announced plans to repatriate passengers.

Last week the Australian Embassy confirmed 16 Australians on the ship had the infection, and were all stable and recovering.

It is not clear how many more Australians — if any — have now tested positive.

The Federal Government is working on plans to evacuate the Australians stuck on board the cruise ship.

An Australian medical officer has arrived in Japan to assess the situation but has not been able to board the ship yet.

More than 200 Australians are on board.

Cabinet’s National Security Committee met on Sunday afternoon but has not made a final decision on the proposed evacuation plan.

“We must anticipate a spread of infections from now and must build medical systems and so on to focus efforts to prevent people from becoming gravely ill or dying,” Japanese Health Minister Katsunobu Kato said on state broadcaster NHK.

“We will make the people feel at ease by providing information in a timely manner, and continue to forestall measures.”

So far authorities have done 1,219 tests on the approximately 3,700 passengers and crew, with the total number of cases from on board the ship now at 355.

One quarantine official who was on board the ship also tested positive during the week.

Those testing positive are being transferred to Japanese hospitals.

The Diamond Princess has been quarantined since arriving in Yokohama, south of Tokyo, on February 3, after a man who disembarked in Hong Kong before it travelled to Japan was diagnosed with the virus.

This update came as the United States moved to send an aircraft to Japan to bring back US passengers on the quarantined ship.

We all know that we were facing a crisis here in Diamond Princess due to NCoV but hey we still managed to smile, laugh and dance. For our Family and Friends to know that we were Ok here and We Will Stand Together As One until we finish the Quarantine.#Galley#TeamDiamondPrincess 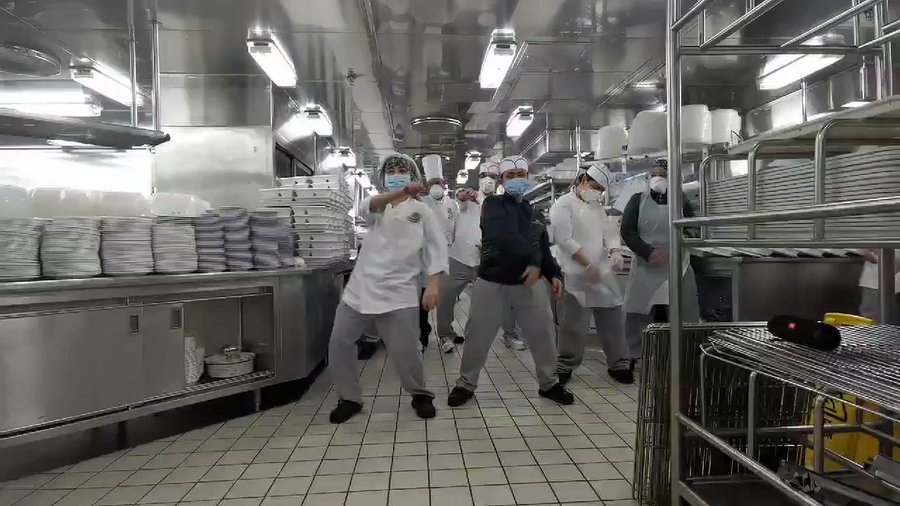 The US Embassy in Tokyo said in a letter to passengers that a chartered plane would arrive in Japan on Sunday evening and that it recommended “out of an abundance of caution” that US citizens disembark and return home for further monitoring.

Is the Diamond Princess quarantine working?

Passengers on the Diamond Princess are undergoing a 14-day quarantine, but as new cases of coronavirus keep emerging, people on board the ship are starting to worry the lockdown isn’t working.

The passengers would be required to undergo a further 14-day quarantine upon arriving in the US.

If they chose not to return on the flight, they would not be able to return home “for a period of time”, the letter said.

Canadian, Hong Kong, South Korean and Italian authorities have also announced plans to charter a plane to evacuate their citizens.

The Canadian Government said in a statement that Canadian passengers who were exhibiting symptoms of the infection would not be permitted to board the flight and would instead be transferred to the Japanese healthcare system.

“We decided yesterday to send a flight and bring [the] 35 Italians home,” Italy’s Foreign Minister Luigi Di Maio said on Twitter on Sunday.

After arriving in Canada, the passengers would undergo a 14-day period of quarantine.

The Australian Embassy in Tokyo emailed citizens aboard the cruise ship to say the Federal Government was examining options to assist more than 200 Australians quarantined on board.

The cruise liner’s quarantine is set to end on Wednesday.

Meanwhile, Taiwan has confirmed its first coronavirus death on Sunday after a taxi driver succumbed to the infectious disease.

Health Minister Chen Shih-chung said during a news conference on Sunday that the deceased person was a 61-year-old man who had diabetes and hepatitis B. Taiwan has to date accumulated 20 confirmed cases.

The deceased person had not travelled abroad recently and was a taxi driver whose clients were mainly from Hong Kong, Macau and mainland China, the minister said. One of his family members was also confirmed to have the virus.

The pair constituted Taiwan’s first local transmission cases, the minister said, adding that authorities were trying to find out as soon as possible the source of contraction.

“So far, we are not able to gather his contact history, so we are actively making investigations, hoping to find out the source of the contraction,” Mr Chen said.

The island will on Monday start testing all patients who show symptoms associated with coronavirus and had travelled abroad recently, the health ministry said.