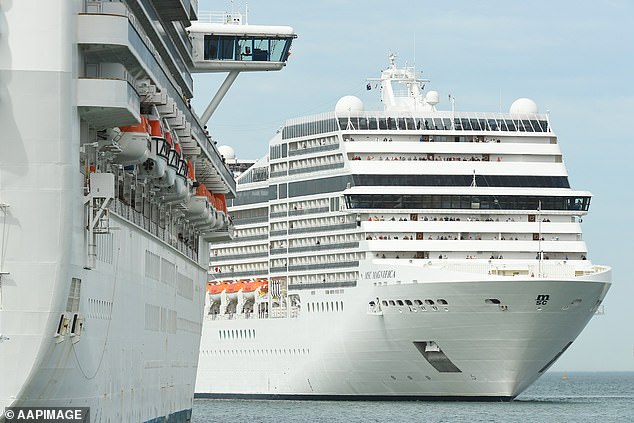 Premier Mark McGowan says more than 1,700 people are on board the MSC Magnifica cruise ship

Cruise ship with 250 passengers suffering from ‘respiratory illnesses’ among its 1,700 foreign passengers from  hot spots WON’T be allowed to dock in Australia – after Sydney’s Ruby Princess debacle

A cruise ship with 1,700 foreigners on board has been blocked from disembarking in Western Australia after reporting more than 250 passengers on board with a ‘respiratory illness’.

Premier Mark McGowan says more than 1,700 people – all of them from European coronavirus hot spots Germany, France and Italy – are on board the MSC Magnifica cruise ship.

The vessel is due to dock at Fremantle on Monday night where it would refuel before making its way to Dubai, WA Today reported.

‘I will not allow what happened in Sydney to happen here. We will not allow passengers or crew to wander the streets. This is a non-negotiable position,’ he said.

Last Thursday, the NSW government allowed the Ruby Princess to dock in Sydney as it was considered a low risk.

It was later discovered there were 48 passengers on board with the virus.

NSW now has the highest number of cases with 669 reported as of Monday. 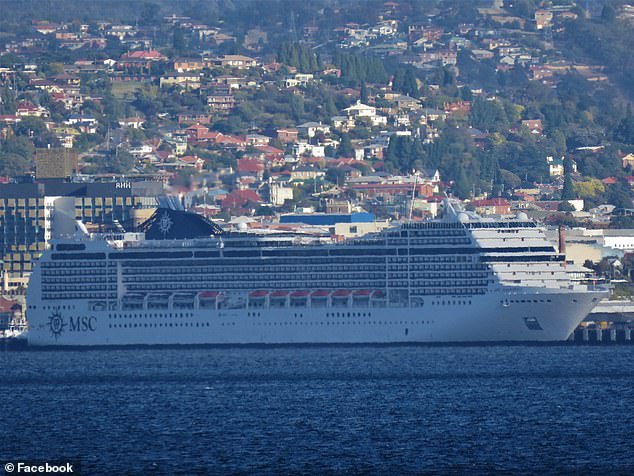 Mr McGowan said options were currently being developed by the Commonwealth, the Defence Forces and the state Government.

‘Options are currently being developed between the Commonwealth, the defence forces and the State Government. We will provide assistance to those with urgent needs.

‘This is an emerging and an evolving issue. We will work with the Commonwealth throughout the day to come up with a plan that properly protects our state.’

Last week the government banned all cruise ships from docking in Australia in a bid to prevent the spread of the virus.

However, under international law and custom, a port must grant refuge to a ship in distress.

The national figure is expected to rise even further once the other states and territories issue an update.

The forced closure has already seen tens of thousands of people suddenly out of work.

Unemployed Australian were lined outside Centrelink offices on Monday hoping to to lodge claims for unemployment benefits and emergency assistance.

On Monday, the prime minister vowed to continue to support the most vulnerable as he warned that many more would likely lose their jobs as a result of the pandemic. 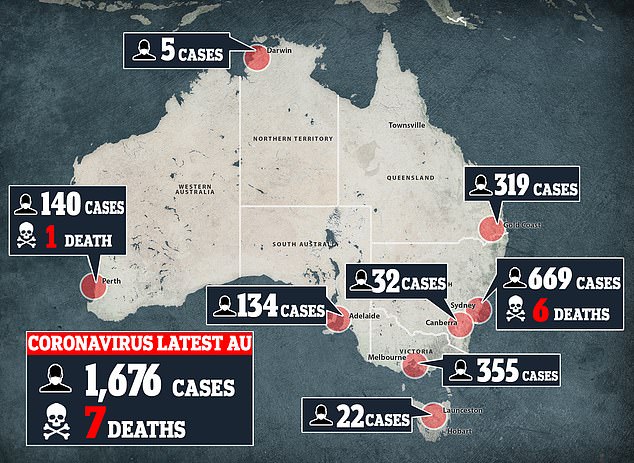 Australia saw a significant spike in the number of coronavirus cases on Monday morning with the amount of people infected jumping from 1,355 to 1,676

‘The tests, hardships and sacrifices that will be placed on all of us, on our national character, will undoubtedly break our hearts on many occasions in the months ahead,’ he said as he addressed parliament.

‘But we must resolve today, as Australians, to come together and to pledge to each other across our nation that this coronavirus will not break our Australian spirit.

‘So, together, and with the rest of the world, we face this unprecedented challenge. A once in a hundred year event.

‘A global health pandemic that has fast become an economic crisis, the likes of which we have not seen since the Great Depression.’

In a bid to slow the spread of the deadly illness, pubs and licensed premises will be closed from midday Monday for about six months.

As news broke of the looming closures, panicked shoppers headed in droves to liquor stores to stock up on alcohol, however, bottle shops will remain open.

The stricter rules come after tens of thousands of people flocked beaches across the country on Friday and Saturday, ignoring the ban on mass gatherings and social distancing orders.

These cruise ships are like a Trojan horse which could easily ship wreck any attempts at containment across the country.