Advisers to the World Health Organisation (WHO) are considering whether to suggest new guidance for the public on wearing face masks as a way to limit the spread of coronavirus.

This comes after new research suggests that coughs and sneezes may project particles much further into the air than previously thought — six metres for a cough and up to eight metres for a sneeze.

Until now, the WHO has recommended face masks only be worn by people who are ill with COVID-19 symptoms or those looking after someone who may have the virus.

Advice for the general public for weeks has been:

David Heymann, chair of the advisory panel to the WHO, told BBC News that the new research may lead to current advice changing.

“The WHO is opening up its discussion again looking at the new evidence to see whether or not there should be a change in the way it’s recommending masks should be used,” said Professor Heymann, former director at the WHO.

The US Government is also expected to announce new recommendations urging many, if not almost all Americans to wear face coverings when leaving home, in an effort to slow the spread of COVID-19.

Until now, health authorities, including Australia’s own Department of Health, have advised the general public not to wear face masks unless they are sick.

The WHO reiterated this advice on Monday, noting that the wearing of face masks is generally to prevent sick people spreading the disease, rather than to protect healthy people in the community from getting sick.

“There is no specific evidence to suggest that the wearing of masks by the mass population has any particular benefit,” WHO’s epidemic chief Mike Ryan said during a news conference this week.

“In fact, there’s some evidence to suggest the opposite,” he added, noting there are risks posed by improperly fitted masks or improperly putting one on or taking one off.

That’s in addition to the problem that healthcare workers who need masks are facing “a massive global shortage,” Dr Ryan said.

“The thought of them not having masks is horrific, so we have to be very careful on supply, but that is not the primary reason why WHO has advised against using masks.”

In Australia, healthcare workers are under increasing pressure due to major shortages in personal protective equipment (PPE), including masks.

They have appealed for more urgent government action to boost supplies, amid reports some doctors are being directed to wear the same single-use N95 or P2 masks all day. 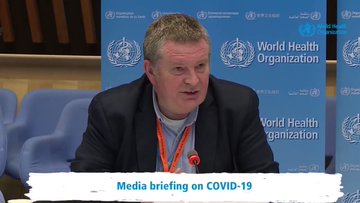 WHO Director-General Tedros Adhanom Ghebreyesus said the organisation’s priority was to ensure frontline workers had access to essential PPE, including medical masks and respirators.

The use of face masks at a community level, he said, was a source of “ongoing debate”.

“WHO continues to gather all available evidence and continues to evaluate the potential use of masks more broadly to control COVID-19 transmission at the community level,” Dr Tedros said.

“This is still a very new virus and we’re learning all the time.

“As the pandemic evolves, so does the evidence, and so does our advice.”

What does the latest research say?

The advisory group to the WHO is weighing up a new US study that suggests droplets from coughs and sneezes could be projected further than originally thought.

Respiratory droplets — which are considered to be the main way coronavirus spreads — are generally thought to travel short distances before falling onto surfaces near to the person who released them.

It’s why the WHO recommends people maintain a distance of at least 1 metre from anyone coughing or sneezing. The Australian Government advises individuals to stay 1.5 metres away from others.

But researchers at Massachusetts Institute of Technology found that, in laboratory conditions, coughs can project liquid up to six metres away and sneezes can reach up to eight metres away.

Professor Heymann told BBC News that if the evidence is supported, then “it might be that wearing a mask is equally as effective or more effective than distancing”.

That’s right….that’s why countries like Taiwan, Singapore, Hong Kong and South Korea have managed this crisis better than others because of face masks.

‘Let’s wait until we know for sure’: AMA

“The AMA remains quite comfortable with the current advice around use of masks and limiting surgical mask use largely to healthcare facilities and people who are unwell,” Dr Zappala told the ABC.

“But clearly this is a rapidly changing space, and we need to — with our epidemiologists and our healthcare workers — keep up to date with the evidence, and be prepared to shift our guidance if that evidence suggests so.”

Dr Zappala said widespread face mask use could inadvertently give people a false sense of security.

“A huge number of people wear those masks improperly — they take them on and off, they touch them, they don’t change them after a few hours … or when they get wet,” he said.

“There is a whole mix of evidence that needs to be taken into account and it is being considered.

“Let’s wait until we know for sure what the evidence is telling us … and then we can make the appropriate recommendations.”

US set to broaden recommendations

In the US, updated guidance on the use of face masks is still being formalised, but is likely to be applied to those who live in areas hard-hit by community transmission of the virus.

The anticipated changes are based on new guidance from the CDC, whose director earlier this week confirmed the agency was reviewing who should wear face masks, following data that showed high rates of transmission from people who are infected but show no symptoms.

In response to data, and other studies showing asymptomatic and pre-symptomatic transmission (when infection is spread by people who seem to be healthy, or before they develop symptoms), the CDC on Wednesday changed how it was defining the risk of infection for Americans.

It essentially said anyone may be considered a carrier, whether they have symptoms or not.

On Wednesday, a committee convened by the US National Academies of Sciences, Engineering and Medicine to advise the White House, said there was a possibility the new coronavirus could be spread by simply talking or breathing.

However, while scientists can’t rule out that infected people sometimes exhale COVID-19 virus particles, according to the committee, there isn’t enough evidence to show if that can cause infection.

According to the WHO, studies to date suggest that the virus is mainly transmitted through contact with respiratory droplets rather than through the air.