Accountable for Equality, an LGBT lobby group, has launched a public campaign attacking Rev. Franklin Graham because his humanitarian organization has held to its policy of enlisting Christian volunteers as it provides critical medical services to coronavirus patients in New York.

Accountable for Equality (AFE) says its mission is to “educate the public about the concerted efforts of anti-LGBT extremists.” During the COVID-19 outbreak, AFE “is focusing its efforts to highlight those that are capitalizing on the pandemic to advance their own biased priorities that marginalize populations.”

As part of this new campaign, titled “No Time for Nonsense,” AFE is targeting Franklin Graham’s outreach Samaritan’s Purse, which has set up a 68-bed field hospital in Central Park, staffed by 60-70 medical professionals. AFE asserts Samaritan’s Purse is “putting New Yorkers’ lives on the line” by recruiting Christians who hold to the traditional one man, one woman model of marriage.

The website for Samaritan’s Purse explains that it looks for Christians to make up its volunteer ranks. In the frequently asked question section, the response to the question “Do I have to be a Christian to volunteer?” reads:

A statement of Christian principles to which volunteers for Samaritan’s Purse adhere includes language affirming a belief in the Biblical view of marriage:

God instituted monogamous marriage between male and female as the foundation of the family and the basic structure of human society. For this reason, we believe that marriage is exclusively the union of one genetic male and one genetic female. 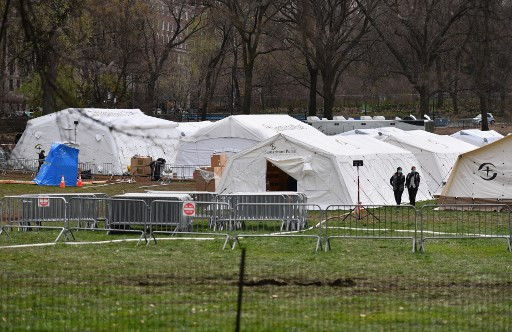 Volunteers from the International Christian relief organization Samaritans Purse set up an Emergency Field Hospital for patients suffering from the coronavirus in Central Park across Fifth Avenue from Mt. Sinai Hospital on Tuesday in New York. (AFP/Angela Weiss)

Healthcare workers are putting their lives on the line to save New Yorkers from this deadly pandemic, and there is no time to be peddling nonsense as a litmus test to help. New Yorkers have no time for nonsense when it comes to helping the sick and elderly, and this practice by Graham is the height of nonsense and the Mayor must order Samaritan’s Purse to end this ridiculous practice immediately. Lives are on the line.

Other LGBT groups have also lashed out at Samaritan’s Purse’s policy. GLAAD (formerly the Gay & Lesbian Alliance Against Defamation) has suggested that Graham’s organization will “turn away” homosexuals in need of medical attention, “leaving them on their own to find care elsewhere.”

Calling Graham an “attack dog that hasn’t passed up an opportunity to demonize LGBTQ people,” GLAAD senior director Ross Murray accused the well-known preacher of “capitalizing upon a crisis to inflict more pain and suffering on an already marginalized population.”

“I don’t trust Franklin Graham to help those in need in the LGBTQ community,” Murray maintains. “I’ve seen far too many anti-LGBTQ activists like Graham ignore the suffering of LGBTQ people.”

Graham has stated that “Samaritan’s Purse treats everyone we help the same.”

“We do not make distinctions about an individual’s religion, race, sexual orientation, or economic status. We certainly do not discriminate, and we have a decades-long track record that confirms just that,” the evangelist has affirmed.

The outcry from LGBT groups has prompted a vigilant eye from some elected officials.

Graham and his volunteers are free to adhere to whatever bigoted beliefs they’d like. But when they come to New York they need to abide by our Human Rights Law, which ensures marginalized New Yorkers are not subject to discrimination.

We can’t let a pandemic change New York’s values. New York City must require every doctor or volunteer working at Graham’s Central Park field hospital — along with anyone providing medical services in a place of public accommodation — to sign a statement affirming their commitment to following New York City’s Human Rights Law.

In an interview, Mayor Bill de Blasio said staff will be on-site at the Samaritan’s Purse field hospital to keep an eye out for any evidence of discrimination.

Luis Miguel is a writer whose journalistic endeavors shed light on the Deep State, the immigration crisis, and the enemies of freedom. Follow his exploits on Facebook, Twitter, Bitchute, and at luisantoniomiguel.com.